Auxo – A refreshing, altogether better take on the current iOS multitasking situation. It offers a preview of your app’s current state, and while this is useful in itself, it also looks a great stretch better than the stock offering. 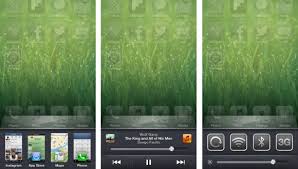 Octopus Keyboard – This tweak brings the BlackBerry 10 keyboard to jailbroken iOS devices. You’ve seen the previews and the demo videos of BB10 in action, and if the keyboard takes your fancy, this tweak is one for you to consider.

Stride – Stride offers an alternative, action-based system for unlocking your device. If youfindthepasscode or passwordunlockingsystemto be a little dull and mundane, Stride’s method of allowing you to draw a specific pattern will certainly spice things up.

PhotoFilters – As the name implies, this tweak allows you to apply filters to your photos natively. Since Instagram, photo filtering has become immensely popular, and if you wish to dabble at device level, check out the PhotoFilters tweak.

Dashboard X – One of the biggestgripeswithiOS is its lack of widgets, but with the Dashboard X tweak, you can have widgets right on your home screen. There are bunch pre-loaded into the app, and they can easily be resized and moved around your home screen.

IntelliScreenX – This tweak vastly extends your device’s Notification Center, providing essentially everything you could ever need from within iOS’s pull-down menu. Features include improved Mail support, Extended Calendar, Twitter / Facebook, RSS Reader, and Quick Reply, among many others.

Messages+ – Made by the samedeveloperasIntelliScreenX, Messages+ offers a well-rounded, altogether more feature-rich messaging app. Its champion feature is the Quick Reply, which lets you respond to a message from within any app, andifyoupurchaseIntelliScreenX, this one’s absolutely free!

BiteSMS – This is far and away my favorite tweak of all time. For those uninitiated, it’s an extended version of the stock Messages apps, and includes a whole host of wonderful features including timed messages, quick compose,passcode lock, and custom themes.

Bulletin – Brings the Notification Center to the lock screen. I’m unsureas to why Apple doesn’t offer this option as standard, but if you want to check all of your notifications without opening up your device, this tweak is for you.

NowNow – This tweak swaps voice-recognition sidekick Siri with Google Voice Search. Ideal for pre-Siri devices,NowNowdoesrequireyouto be running the latest version of the Google Search app, but once that’s installed,NowNow is free overattheBigBoss repository.

iFile – This one allows you to browse your device’s file system. If you planoninstallingquite a few tweaks, it’s a necessity, and even if you’re not, it’s useful to have as an explorer.

Springtomize 2 – This tweak is arguably the only app you’ll everneedin order to customize your device. Whichever element you’re lookingtomodify, be it your status bar, icons, text, whatever, you can dosowithSpringtomize 2.

Zephyr – As well as allowing the multitasking bar to be revealed by a swipe from the bottom upwards, Zephyr allows one to slide between the active display of open apps, akin to the four-finger gesture on iPad.

SBSettings – SBSettings is, many would say, the most useful tweak on the cydia store. If you have jailbroken before, you’ll already be more than aware of its capabilities, but for the uninitiated; SBSettings provides an easily accessible menu of all your device’s key functions in any one place. Once activated, one can toggle Wi-Fi, 3G, Data, Location Services, Brightness, Airplane mode, and other features on / off with a simple tap, as well respring / reboot / lock / safe mode or power off with absolute ease. Oh Apple, please make this a native feature!

Switchy –Switchy is yet another appswithcher/ multitask bar tweak, and as well as housing the ability to clear all apps with one tap (useful if, like me, you’ve a tendency to leave many open at any given moment), but it allows for two rows of icons, making things twice as easy to manage.

Activator – Activator allows you to assign various activationmethodstoperform certain behaviors. These be based on a variety of gestures, such as swipe, tap, shake or sequential pressing of physical buttons. 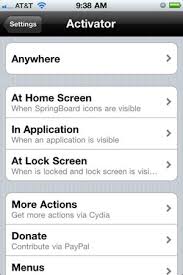 AirBlue Sharing – Apple doesn’t like you sharing content between iOS or non-iOS devices, but if connected to the same network, AirBlue Sharing will use the Wi-Fi connection for the transfer of files. There is also Bluetooth sharing, but it’s much slower.

WinterBoard – Created by Saurik, this is the original theming app for iOS. WinterBoard differs somewhat from Springtomize in that it focuses on the overall look of the lock screen and home screen. If you don’t feel like theming yourself, there are trillions of pre-made themes available online and through Cydia, so there’s bound to be a look to suit you. Oh and if you decide to install WinterBoard, make sure you try Ayecon theme, it is by far the best theme available for jailbroken devices.

App Locker – Pretty self-explanatory, App Locker allows you to lock your apps with a password. This is especially useful if you don’t want to unlock your device every time you use it, but want to keep certain apps closed from prying eyes.

Zeppelin – This allows you to change your carrier logo / text to an icon of your desire.

f.lux – f.lux is a truly unique app which brings a warmer, ‘sunset’ overlay to your device’s screen. It’s certainly one that has to be experienced to be appreciated, and you can also set it to activate only at night, which is useful since it’s easier on your eyes.

OverBoard – OverBoard allows you to view pages of home screens at a glance. If you’ve a million apps and find it hard to manage them, OverBoard may just be your ticket.

PS: To install any of the tweaks/apps mentioned above, you would need the respective Cydia Sources, so here you go -> http://www.theunbiasedblog.com/2012/12/top-10-cydia-sources-for-iphone-ipad.html