The Unbiased Blog
Home News Tech Happy Birthday Google Play! Who wants free Apps, Books etc?
Till last year it was Google’s Android Market giving us all the surprises and freebies. With the rebranding of  the Android Market as Google Play last March, Google is celebrating it’s first year completion by giving away gift cards and discounts on music, movies, books, games, and more. 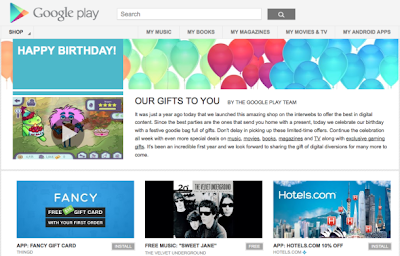 “It was just a year ago today that we launched this amazing shop on the interwebs to offer the best in digital content,” the company wrote on its Google Play Web site. “Since the best parties are the ones that send you home with a present, today we celebrate our birthday with a festive goodie bag full of gifts.”

The Web giant is giving special deals on music, movies, books, magazines, TV shows, and games. Among the offers are a 10 percent discount with Hotels.com, a $15 gift card from the Google+ Sign-In partner Fancy, 99-cent movie rentals, free song tracks from The Velvet Underground and LCD Soundsystem, and more.

The company has a tradition of celebrating its achievements with gift giving. When the Google Play store hit 25 billion downloads in September, Google launched discounts on a variety of popular apps. The company also promoted collections like 25 must-own movies, 25 banned books, and the “25 albums that changed the world.”
As far as celebrating its birthday today, Google wrote, “It’s been an incredible first year and we look forward to sharing the gift of digital diversions for many more to come.”


Google has also revealed a video where developers speak about the offers they have planned for the week ahead.
www.theunbiasedblog.com