Free Books for your Amazon Kindle 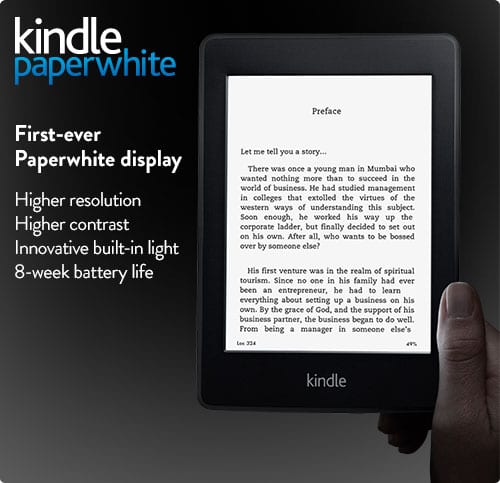 The first place we would suggest going to for free Kindle books is straight to the source – Amazon. Here you’ll find hundreds of free ebooks (.azw files) that can be downloaded and sent straight to your Kindle.

The right hand column lists the top 100 free Kindle books in order of popularity. You can also browse Amazon’s limited-time free Kindle books to find out what books are free right now and you can sort this list by popularity, review, and publication date.

Autobiography of a Yogi

Autobiography of a Yogi

There are many more sources available on the internet from where you can download free books for Amazon Kindle but we would only recommend the official Amazon site.

Ubisoft revealed the first footage for the touted action title of the year – Far Cry 3: Blood Dragon!
Imagine the good ol’ days of VCR and Cassettes, those epic basslines from some epic gangsta style songs, that 8-bit console that would keep you busy all day. All of them colliding with perhaps the greatest gameplay of 2012 – FC3. I mean, this blend is truly a mad one, how can retro fit in with a sleek and modern story like Far Cry 3’s? Where would the animals go, or the ‘Hello Brother’-ing Rakyats, hell is Citra going to show some skin or not?!
It’s the dawn of the cyber age, the year is 2007, err, in parallel universe! That’s the set up that Blood Dragon boasts of, futuristic warfare, futuristic (and trippy) colours on your screen, enemies who look to have emerged from the famous Daft Punk video ‘Around the World’ and two cyborg warriors battling it out. Vietnam War has ripped the universe into a nuclear war. The gameplay shows the same movement and kill styles as in FC3, but I think I saw the protagonist showing a middle finger and saying ‘Fuck Yeah!’, didn’t I? And purple coloured weaponry! Well God knows what it will be like.

Visually it looks like a concoction of Gasper Noe (director of Enter the Void) and Paul Verhoeven’s style (director of Total Recall). The video looks like a Centurions’ intro, with a strange connection to Power Rangers. Completely mindless 80’s futuristic interpretation. The trailer epitomised the 80’s, with the mad intro advert that has nothing to do with the game, the VHS screen and the 8-bit logo formation.
In a layman’s language, do not expect anything out of Far Cry 3: Blood Dragon, but insanity! The trailer looks nostalgic, artistic, trippy and fuckin’ awesome! While there’s still a month for the release, I’d have to admit that I cannot wait for this piece of randomness to come as quick as it can. This is going to be a different paradigm of experience. Question is, is there any cord leading back to the story of Brody?
How about a gameplay leak?
Add to this, the protagonist’s voice is done by none other than Michael Biehn! (The guy who played Kyle Reese in Terminator, 1984) Everyone pack your bags, we are leaving for the 80’s, the age which started our obsession with the future!

Injustice: Gods Among Us – Reviewed
Weapons To Die For, Literally – Part 1
“Did I Ever Tell You….? The Definition of Insanity.
Life is a Game! Well not in China
HUNT THEM. KILL THEM. From a CELL to CEPH
PVR bluO ‘Playstation Premium Lounge’

Panasonic celebrates #MujheGarvHai: A Tribute to the Indian Armed Forces