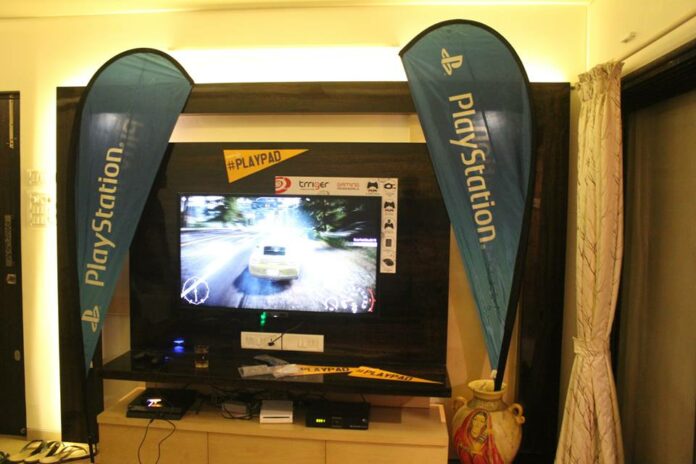 Game4u has launched its new property – ‘Game4u PlayPad’. The property which is gaming & party spot for gamers will take place on a regular basis, where enthusiasts come together to enjoy the latest games. The first PlayPad Night took place on 15th February, 2014 in Mumbai, with a turnout of 45 casual gamers.

Hosted by Game4u, the PlayPad gaming nights are designed with the objective of spreading the brand message of making gaming a primary medium of entertainment and recreation amongst the young adults. Game4u will host customized gaming parties, wherein a group of 20 gamers can come together at one place and play various single player or multiplayer games. The parties will be executed with specialized themes across different venues. For the PlayPad Nights, Game4u has got on board energy drink ‘Red Bull’ and ‘Debonairs Pizza’ as brand partners. Game4u will also be conducting an online and offline gaming competition to find out the most eligible gamer amongst all. Contests across social media will be held, where the fans get a chance to have a gaming party thrown at their place. As a part of giveaways, Game4u will be offering gaming merchandise, partner merchandise, Team Elite memberships, and discount coupons. Commenting on the launch of Game4u PlayPad, Mr. Jayont R Sharma, Chairman and CEO, Milestone Interactive Group said, “We are very excited to bring the Game4u PlayPad concept to our consumers. With this initiative we are looking to spread awareness about gaming and build an extensive gaming community across all age groups. We are hoping to interact with our consumers at a more personal level and are looking make gaming a cult phenomenon, like it is in some of the other countries.”

He further added, “We are starting Game4u PlayPad with Mumbai and will soon take it to other cities in the coming months.”

On partnering with Game4u, Mr. Yogesh Parekh, Director, Diwa Hospitalty said, “”Debonairs Pizza is sporty and targeted to the youth of India as much as families. We at Debonairs Pizza believe that pizza brings us together and is, in itself, a reason to celebrate with those we love by simply Tucking in! Gaming and sport also share the same vein of achievement and unity as Debonairs Pizza, hence the association with Game4u was a complete harmony!”

We really hope it launches is other parts of India, specially Delhi as we cannot wait to get party all night. Also it’s going to be serious competition for PVR BluO Gaming Zone 🙂