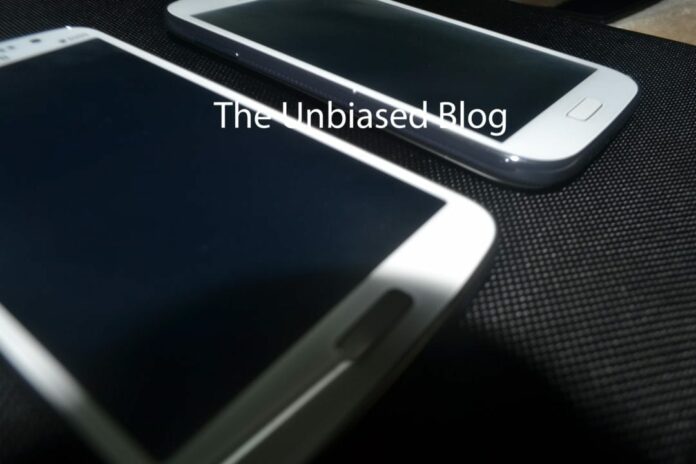 As its a successor to a hugely popular device, does it have the ante carry on the legacy? Well lets visit the device specs and a lot more to get all the answers:

Now to the design and build quality

Both the devices have very similar design, in fact as its the the design philosophy Samsung goes with most of its device are hard to differ. In this case also, the hardware home button, the placement of the buttons and the chrome sides make it hard to differentiate from the front. But as soon as you turn the device around, you can easily make out as the Grand 2 packs the faux leather matte back cover for a premium look and feel borrowed from the Note 3 but not the same finesse. But we welcome this change as the original Grand’s plastic back was susceptible to scratches and breaks. Another welcome change is the thin bezel on the Grand 2. Not only it makes it look slimmer but also fits the larger display seamlessly onto the device. Even though the devices are strikingly similar, the Grand 2 is 0.7mm thinner than the Grand Duos while weighing almost exactly the same, in fact 1g higher. Don’t worry you won’t even notice it. As the Grand 2 has a 16:9 display as opposed to the older 15:9 WVGA screen it’s a bit taller too. One of the factor that sets apart a entry level device from a premium device is its display quality. And when we say display quality, it means whether its VGA, WVGA, XVGA etc; What’s the PPI (Pixel Per Inch). In this case too, we will tell you why Galaxy Grand Duos had a 5″ WVGA screen at 187 ppi loses it to Grand 2’s 5.25″ screen with 720p resolution at 280 ppi. If you had used the Galaxy Grand then you would agree with us that it’s display was its biggest let down. The Grand’s screen always looked blurry and pixelated while the Grand 2′s screen is crisp, has better colors and definition overall. Moving on the most important part of the device the internals. There isn’t a leap of difference in both the devices even though the Grand 2 boasts completely new hardware when compared to the Grand Duos. The original was powered by the Broadcom BCM28155 chipset, a cortex A9 based 1.2 GHz Dual Core CPU, accompanied by the Videocore 4 GPU. The successor is powered by the Snapdragon 400 MSM8226 – a Cortex A7 based 1.2 GHz Quad Core processor that has the Adreno 305 for graphics. The only difference we felt was less lag even with multiple apps open. And that is because of the RAM gets an upgrade from 1 GB on the Grand Duos to 1.5 GB on the Grand 2, which provides it with enough RAM for multitasking and background tasks.

We won’t be comparing the camera’s of both the devices as they are exactly the same 8 MP cameras with 1080p recording and a 1.9 MP Front facing camera. The only difference is the Camera UI on the Grand 2 as it’s inline with what comes along with all new samsung smartphones. And some UI tweaks because of Android 4.3 FW, and with upgrade to Android KitKat you would notice even more changes.

From looks, display and power let’s move on to backup (battery backup). Even though the Grand 2 has a 2600 mAH battery, do not expect to last longer than the Galaxy Grand Duos with a 2100 mAH battery. The reason is higher resolution screen and a quad-core processor. The Unbiased Verdict:
If you already own the Samsung Galaxy Grand Duos then we would not recommend you to jump in the Grand 2 bandwagon. But if you have started to feel that your Grand Duos is laggy, battery is not lasting enough and display isn’t as crisp as you would like it to be then close your eyes and buy the Grand 2. That was for the Grand Duos owners, what if this is your first Grand device? If your budget is above INR 20,000 then you have a lot of options but Grand 2 is one of the best out of these. But if you can stretch a bit then we would recommend the Samsung Galaxy S4 at a steal deal price of INR 28,000.   Samsung Galaxy S4.