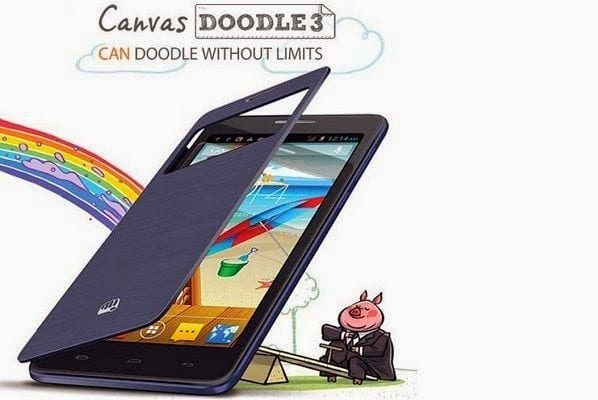 Micromax launched the Canvas Doodle 3 which comes with a massive 6-inch touch screen that lets users’ imagination run wild and limitless. The phone is available in Pristine White &  Blazing Blue colours and comes with a snazzy magnetic flip cover that adds to its style.

The company unveiled the TVC of the new smartphone. Taking forward the legacy & the success of the Doodle2, the TV campaign showcases the colourful world of doodles with the main protagonist being a cute piggy, who can do impossible things & push the limits because of the large 6-inch screen of the Canvas Doodle 3.

The TVC revolves around the ‘you can’ ideology and starts with an animated piggy which is shown sitting on one end of a see-saw and in the next shot a hippopotamus sits on the other end. With the weight of hippo, the piggy flies high in the sky and lands on a rainbow through the clouds and birds. In the next shot, the cute playful piggy slides through the rainbow and lands in his house where his parents are gazing the snow through their window, having a hot cup of coffee. In the next shot the piggy leaves his home and lands at a place where he spins like a cool DJ.

The TVC ends with a shot of revealing that everything is being doodled on the device.

The essence of the TVC is that users’ imagination cannot be limited and the new Canvas with a 6-inch screen helps them doodle out of the box and off limits.