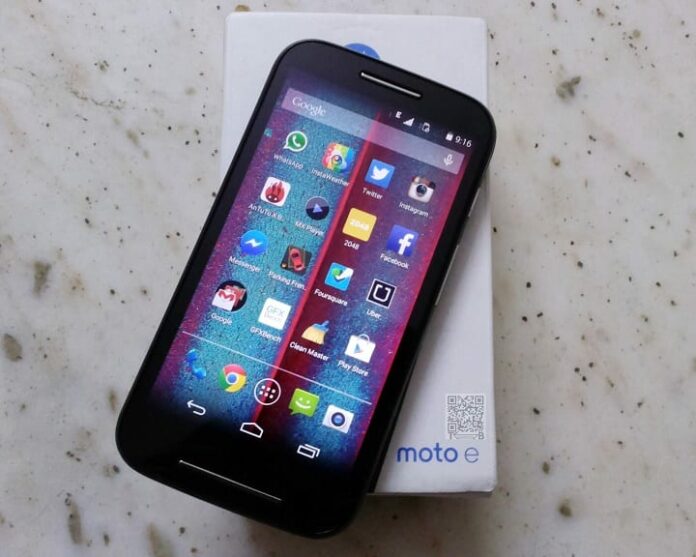 Motorola is one company which was once thought to be dead but then search engine giant Google went on to buy the smartphone maker and developed a new series of smartphone starting with the Moto X which was followed by Moto G. And now, the latest addition to the series is the Moto E, which is the most affordable of the trio.

When Motorola went on to reveal that is it going to bring a smartphone with best of everything with a price tag of everyone, we all thought that the smartphone will be priced somewhere between Rs.9000- Rs.11,000 but Motorola, which is now owned by Lenovo went on to price the Moto E at just Rs.6,999 which has just shaken the market’s economics as it brings the latest version of Android, the Android 4.4 KitKat within the reach of almost everyone. But for Rs.6,999, is the device worth the hype? Let’s find out. 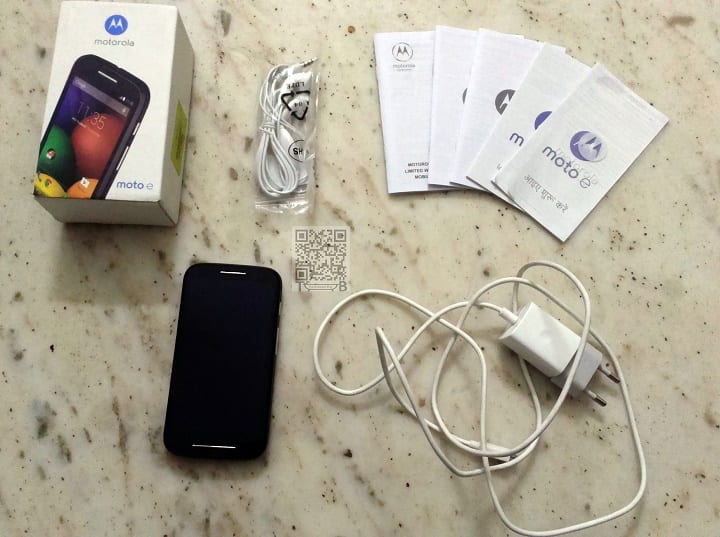 The Motorola Moto E’s box has the following: 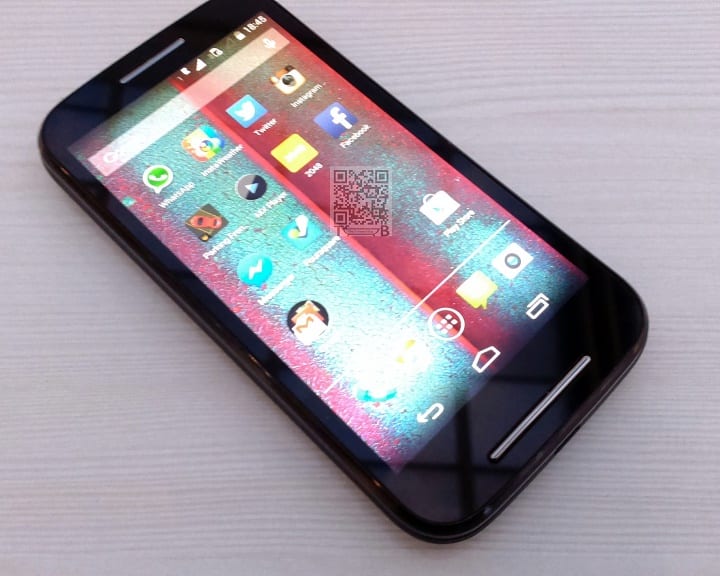 The Motorola Moto E comes with a design very similar to the Moto G with curved back and is since it a nice 4.3 inch display, the phone is very handy and feels great to hold.

As shared earlier, on the front, the Motorola Moto E comes with a 4.3 inch display with a resolution of 960 x 530 pixels, which is indeed better than what other competitors offer to buyers in the sub-7000 price range and with Corning Gorilla Glass 3 protection. 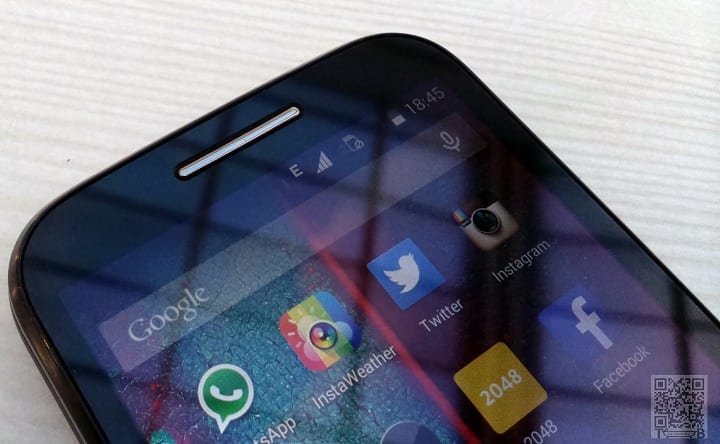 Above the display, we can find the earpiece which comes with a chrome finish and there is a LED notifications on the right which glows in white colour when you have a mail, text or any other notifications. On the left, you will find the proximity and ambient light sensors. One important feature today, the front facing camera is sadly missing from the Moto E. 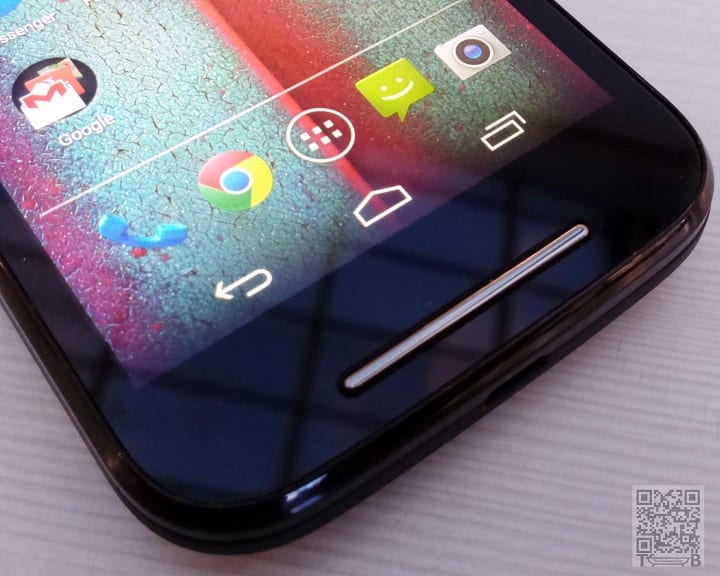 Below the display, Motorola has placed the speaker grill which also comes with a chrome finish. 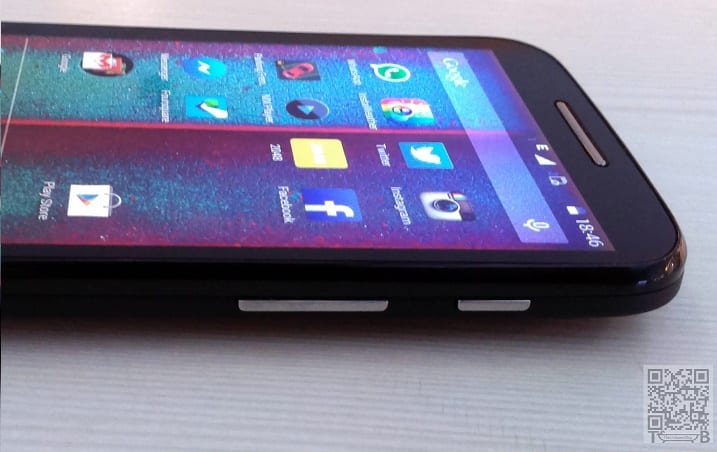 On the right of the phone, we have the Power/Lock button with the volume rockers just below it while Motorola has kept the left side clear of any buttons.

On the top of the device, you can find the 3.5mm audio jack with a microphone next to it. Below, there is the microUSB slot which users can use to charge the smartphone and also transfer data using a microUSB cable, which the company has not provided in the package. 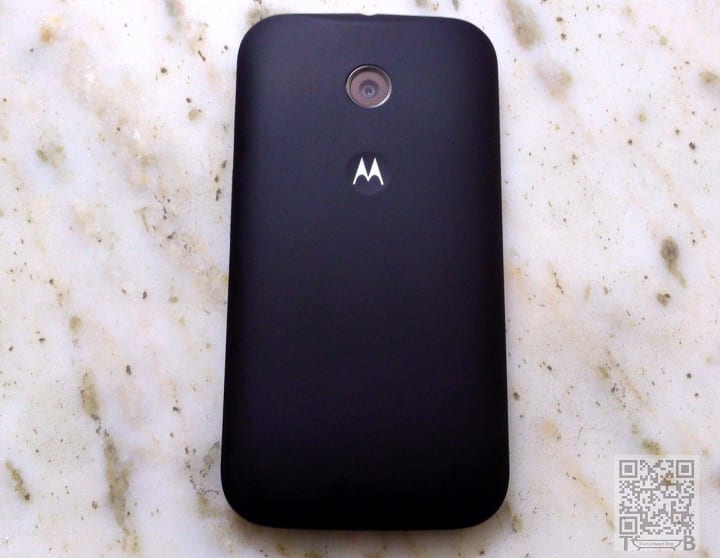 On the back, the Moto E carries a 5 megapixel fixed focus camera with no LED Flash and the logo of the company can be found just below the camera. 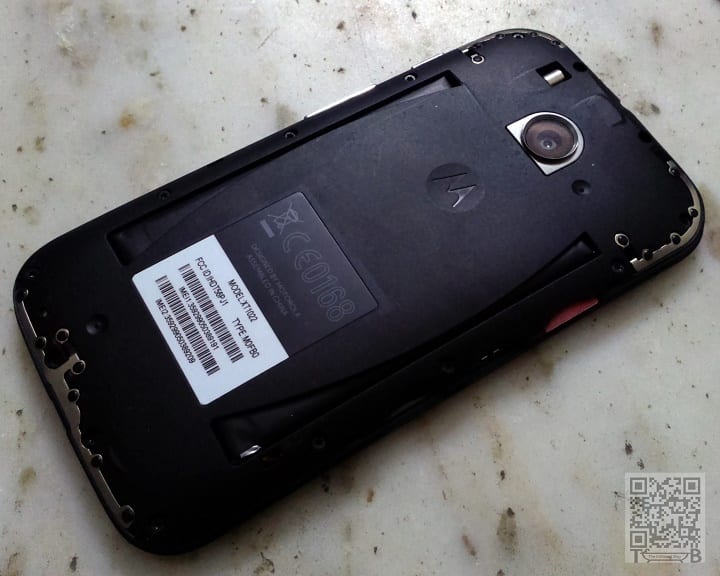 The body of the smartphone is rounded on the back and weighs about 142 grams. It measures about 12.2mm thick but the edges are thinner. The back cover on the Moto E is great comes with a matt finish which is thankfully not a fingerprint magnet and offer great grip to users. The back cover is removable and reveals the 1980 mAh non-removable battery and gives users, access to the microSD card slot the microSIM slots. All in all, the Moto E comes with a great hardware.

The Motorola Moto E comes with a 4.3 inch display with a 960 x 450 pixels resolution which gives users a pixel density of 256 pixels, which is higher than anything that other smartphones in the price category are offering. As already shared, the Corning Gorilla Glass 3 protection is a cherry on the cake while the viewing angles are decent enough. The quality of display is good and the sunlight readability is much better than expected.

Overall, the display will not disappoint you and you will surely enjoying the Moto E, which has a great responsive touch too. 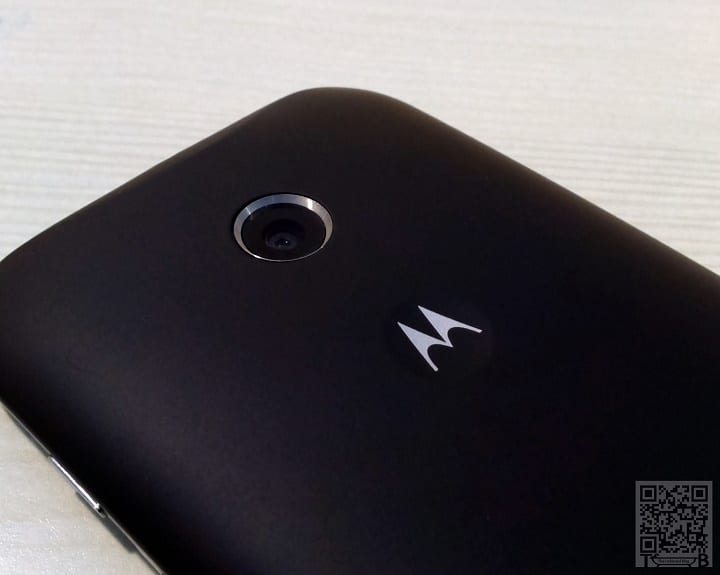 To keep the price of the Moto E down, Motorola has compromised on the camera of the smartphone, which comes with as a 5 megapixel fixed focus module which, going by the standards is now outdated as auto focus is the need of the hour. Also, an LED Flash would have been so much better for capturing pictures at night but Motorola has kept that away too.

The pictures turn out just good enough in daylight and but when it came to low light or night conditions, the camera just managed somehow. Motorola has been kind enough to include options to take the images in HDR and Panorama and users will also be able to select if they wish to take an image in 16:9 or 4:3 aspect ratio.

Check out the camera samples below (Click to view image in full size): 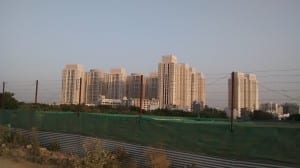 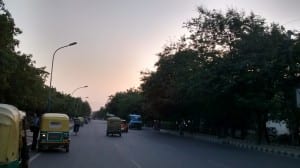 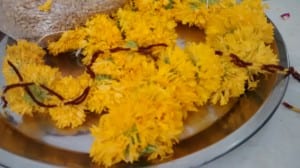 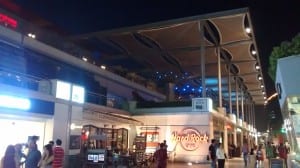 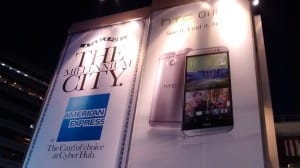 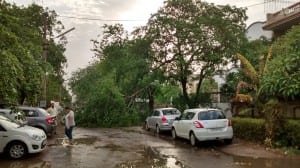 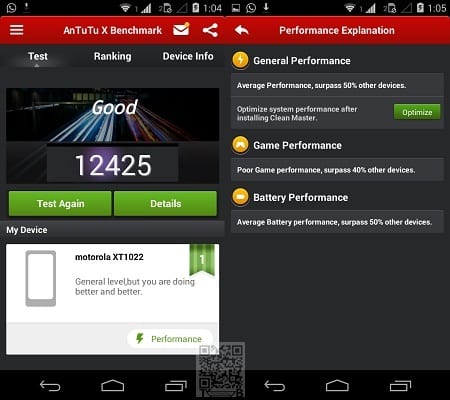 The Moto E is powered by a decent Snapdragon 200 processor which has a dual core processor clocking at 1.2 GHz and is complimented with 1 GB of RAM which scores good on AnTuTu X Benchmarks with 12425 points where the 3D graphics are good and overall the phone can fluently support most of the games. 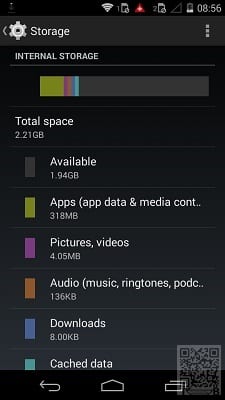 The phones comes with 4 GB if internal storage of which just about 2 GB is available for users, which in indeed less going by the standards but then what else would you expect from a device for Rs.6,999. But thankfully there is the support for a microSD card slot, up to 32 GB so that users can store their data, pictures, songs, and even apps on the MicroSD card slot. 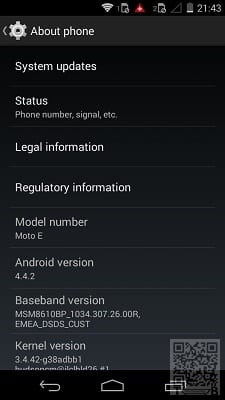 One of the best thing about the Moto E is that the smartphone runs on the stock version of the latest Android OS, which is the Android 4.4 KitKat out-of-the box with guaranteed timely upgrades promised for the smartphone. Now this is another selling point for the smartphone as there is a good chance of delay from other OEMs to provide upgrades for their smartphones once a new version of Android OS is available or not even go ahead with it in the future. But Motorola, since it was under Google provides OS upgrades to its devices, only next after Nexus devices get them, which is cool. 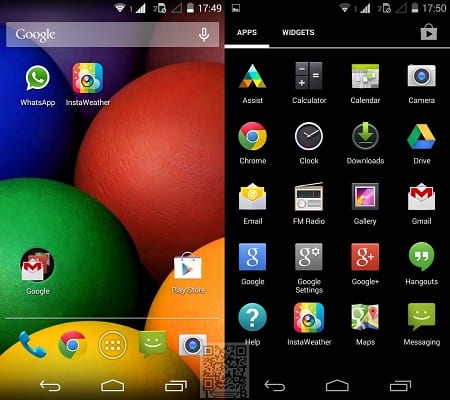 Apart from the stock Android OS, Motorola itself has included a few apps for users which are called Assist, Alert and Motrola Migrate to name a few. The Assist app will helps you to avoid any interruption if you are in a meeting or you can set up a time when you do not wish to get any calls while you are asleep. The app also gives you options to whitelist people from whom calls will be allowed while the app is at work.

Next is the Alert app which will help you alert your loved ones about your location in case there is any emergency, just at a click of the button.

Motorola Migrate is one great app to transfer all your contacts, messages, call log, photos and more onto your new Moto device from your older phone. All that you need to do is download the app on your old phone from the Google Play Store and scan a QR code which will then start the process to transfer your data from your old data.

Motorola decided to give users the best of what it could and included 2G, 3G, Bluetooth, Wi-Fi and even dual-SIM capability into the Moto E which gives users an array of connectivity options and not feel being left out on any. The Wi-Fi and Bluetooth worked well on the device but there were times when we faced issue with the signals on the Moto E. If you happened to keep the smartphone in pocket, the signal was lost and we always had to restart the phone to get back the signal. We are not sure if this was a handset specific issue or a problem with the placement of the antenna on the Moto E, but this was only a few times. 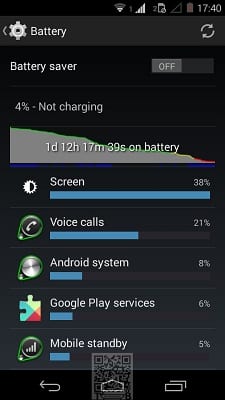 One best thing about the Motorola Moto E is the powerful 1980 mAh battery which goes on to provide users a brilliant backup. On first full charge, we got a backup of about 1 days, 12 hours and still 4% of backup left which included calls and internet usage over 2G, texts, social networking for most of the time, loads of calls and clicking pictures. This makes us believe that normal users would get a better backup than what we got.

Our unbiased view of the Motorola Moto E  is that at Rs.6,999, it is one awesome device if you could adjust with the mediocre camera on the phone and the lack of flash. But if you don’t want to settle for less than you have options like Xolo A500s, Micromax Unite 2, Nokia Lumia 520, Nokia X, Sony Xperia E and a few more devices.