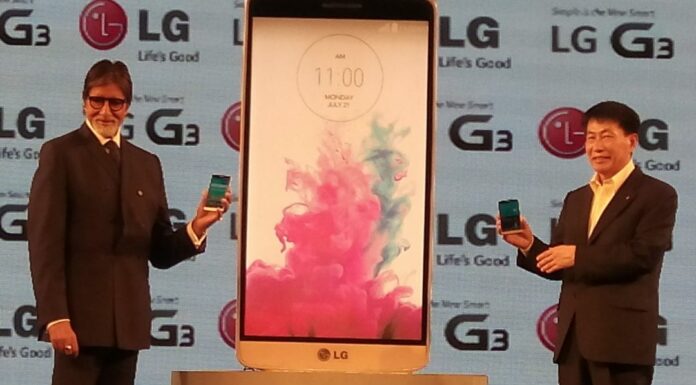 LG India finally took the wraps off the G3 and guess who unveiled the most awaited Android flagship. It was none other than the living legend Amitabh Bachchan, truly #LegendLaunchingLegend. The India launch event was at Mehboob studios, Mumbai. Where I was able to get some hands-on time with the new device and see the features in action. The point that Mr. Soon Kwon and Mr. Amit Gujral kept reminding us was that they are giving users high-end technology without the complexity. Each feature was mentioned in the context of simplicity and ease of use. There is no doubt that LG G3 is a notch above its predecessor G2, so let me tell you what all has improved in the G3:

One of the most important feature of the LG G3 is its display. Get over Retina and Full HD displays, as the G3 has a super-high-resolution screen. With 2560 x 1440 lines of resolution and 538 pixels per inch, and trust me the display is absolutely stunning. Demo videos on the 5.5-inch screen were flawless. So was shooting with a camera capable of capturing QuadHD content. But LG also listed several reasons, including adaptive frame rate, adaptive clocking, and adaptive timing control so that having a beautiful screen doesn’t limit the amount of time you use the phone.

I suggest you to blink your eyes a few times before you read about the G3’s camera. Amused? Don’t be cos I asked you to do this exercise to tell you how fast the G3’s laser autofocus is capable of quickly focusing on an object in 0.276 milliseconds. And to add to the speed, instead of tapping on the screen to focus and again for the shutter, the two tasks are combined, which should help in capturing action shots. The camera on the G3 is same as the G2 i.e.13 megapixels, but LG acknowledged that by simply increasing the megapixels won’t result in better photos. The company did improve the optical image stabilization, which will hopefully help prevent blurry photos. The QuadHD screen makes any photos come alive, but there’s also chances that such a display will make photos clicked in low light look that much worse. 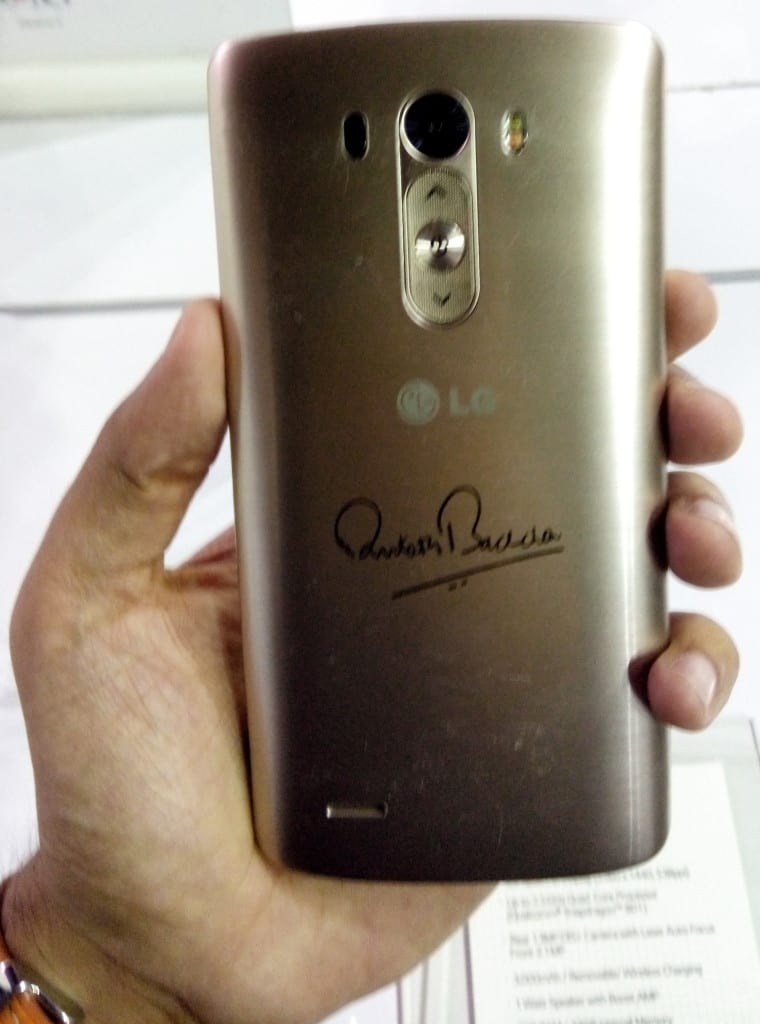 You would see a lot of changes in the UI of the LG G3. Its great to see LG embracing the “flat” aesthetics for the G3. It all started with Apple switching to Flat UI in iOS 7 from the skeuomorphism in the previous versions of iOS. And, I welcome the change with open arms. You will see a lot of circles throughout in icons and other elements, and the circle theme shows up in the QuickCircle case, which has a custom-sized notification window for performing a few tasks without opening the case. 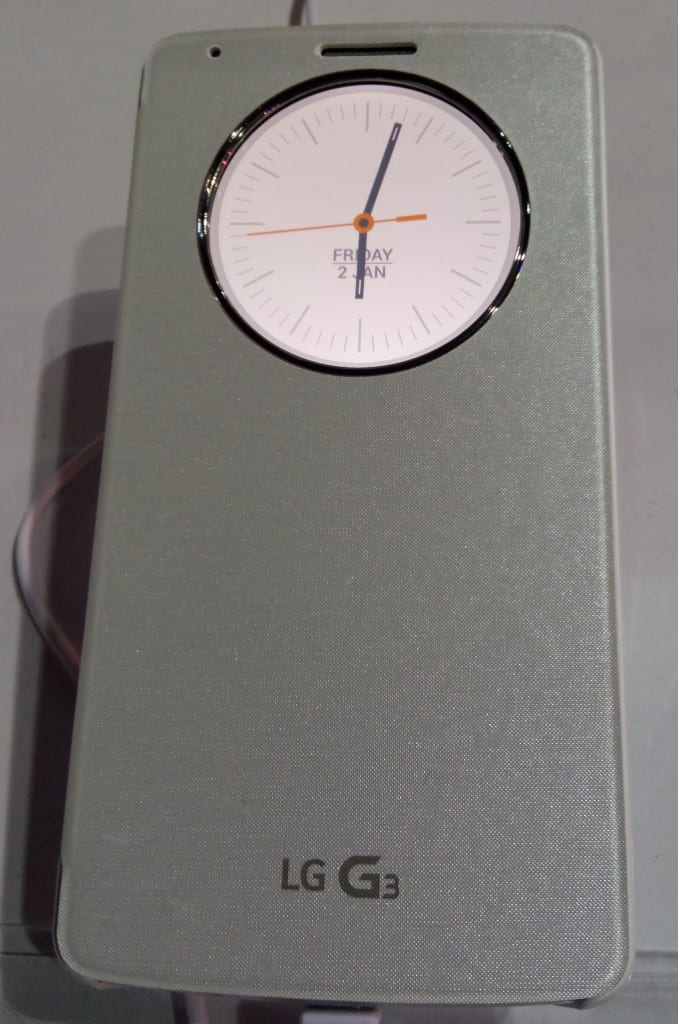 The G3 also boasts a Smart Notice feature, which pops up alerts and tips before a user asks for it. No it’s not a copy of Google Now, Smart Notice is meant to compliment Google Now, rather than replacing it. By complementing I meant, it will prompt users to add or remove contacts based on frequency of use. It will also recommend the removal of files or apps that haven’t been used in a while, as a way to free up space or improve performance. To make the G3 even more customisable, LG has add unique feature which lets user  adjust the keyboard height. Users can also change cursor position by long pressing the spacebar and sliding left or right, which is supposed to free users from having to move their fingers back and forth between cursor selection and typing. The keyboard worked really well, but such a change to typing will take some time to adapt to. 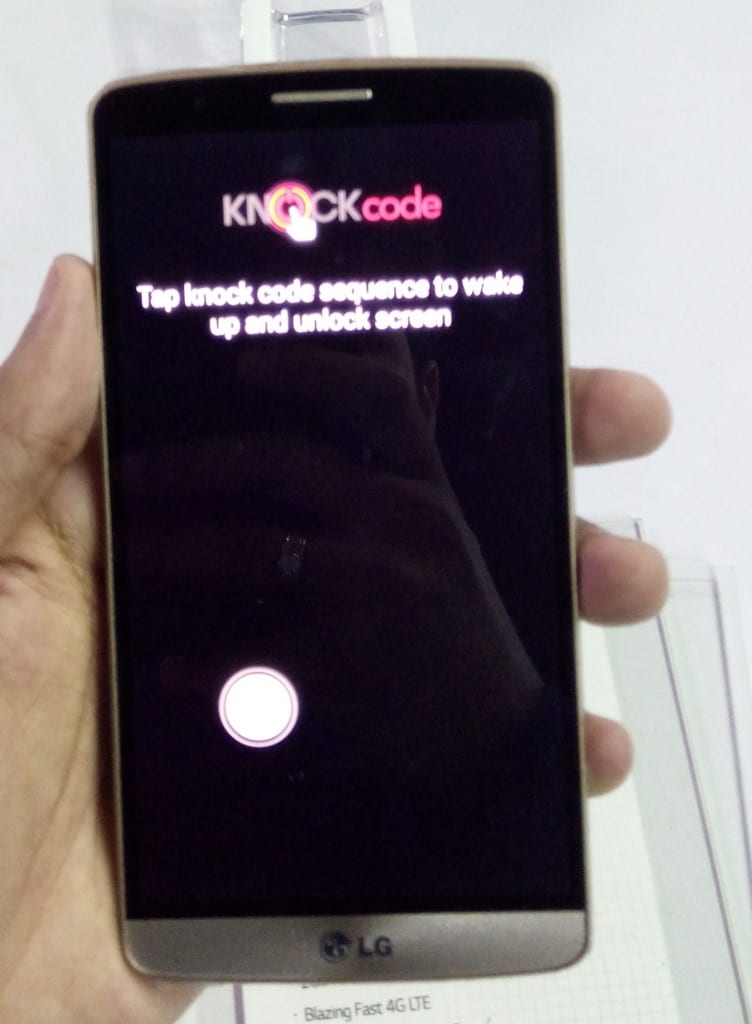 Moving on to security, LG has added content protection so you can share the device without letting other users have access to your photos or videos — even if the device is connected to a computer. And that’s not all, LG continues with its Knock Code security feature. How the Knock Code works? When the screen is turned off, it is invisibly divided into four squares. Users can then make unlock patterns based on the number of taps and the location of those taps on the screen. Completing the pattern skips the lock screen and goes straight to the home screen.LG has also incorporated Kill Switch. G3 users will be able to remote wipe and remote lock, and even permanently disable the device from being reactivated by someone else in the future. Similar to Apple’s Remote Wipe using iCloud, which makes iPhones get tied to a user name to keep thieves from re-using stolen devices.

The display size, strong battery life, improved software and reliable camera are the core of what makes the G3 a winner. But there is more to it, LG G3 feels small to hold and big to look at, in fact you’d be surprised to find it so easy t0 hold in your hand.  It’s a must have for those who want the biggest screen, the highest-resolution display, and relatively niche features like wireless charging and a removable battery.