The Unbiased Blog
Home Reviews The Phablet For All: ASUS Fonepad 7 Dual SIM 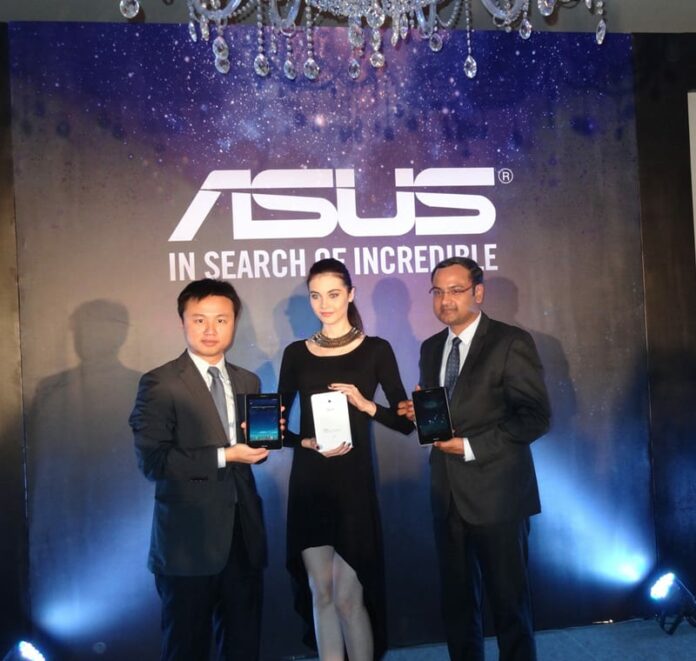 In the span of an year, the Taiwanese technology major – ASUS has launched different variants of its flagship product in the phablet segment – the Fonepad, which is much of a follow-up of the Samsung Galaxy tabs, if we go by the screen size for the least. No matter how ridiculous it looks when people take calls with such a gigantic device stuck to their cheeks and their face is rarely visible, the trend is catching the jungle fire from quite some time now.

The latest of the Fonepad series – the Fonepad 7 Dual SIM is pretty much of a decent gadget to be seen around with. Let’s check it out in detail!

When it comes to unboxing, the ASUS Fonepad 7 Dual SIM does not throw around a lot of tantrums and is a ready-to-use device right out of the box which contains the phablet and the data cable-cum-charger, but the box definitely seems to have a pair of earphones missing.

At 340 grams, the phablet is a little heavier than few of its counterparts out in the market, and sports a glossy (but not reflective) white plastic back, which is notorious enough to attract smudges and scratches easily. The rear of the device also houses the only speaker panel which is decent enough for your calls. 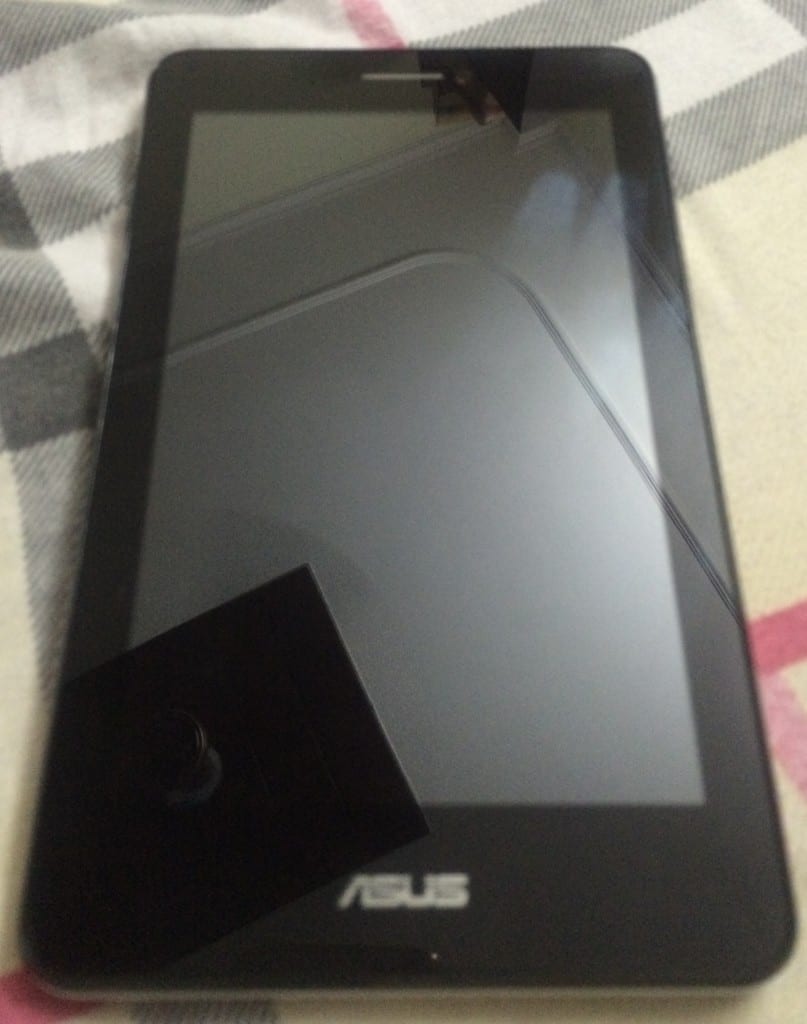 On the bottom of the bare front of the device is placed the ASUS logo in its signature sharp and edgy font. While on the top of the right hand side is the volume adjustment and power buttons (both made of plastic) and the left side houses the 2 SIM card slots and the memory card slot. The top of the device is where the micro-USB 2.0 and the 3.5 mm audio jack has been provided with. 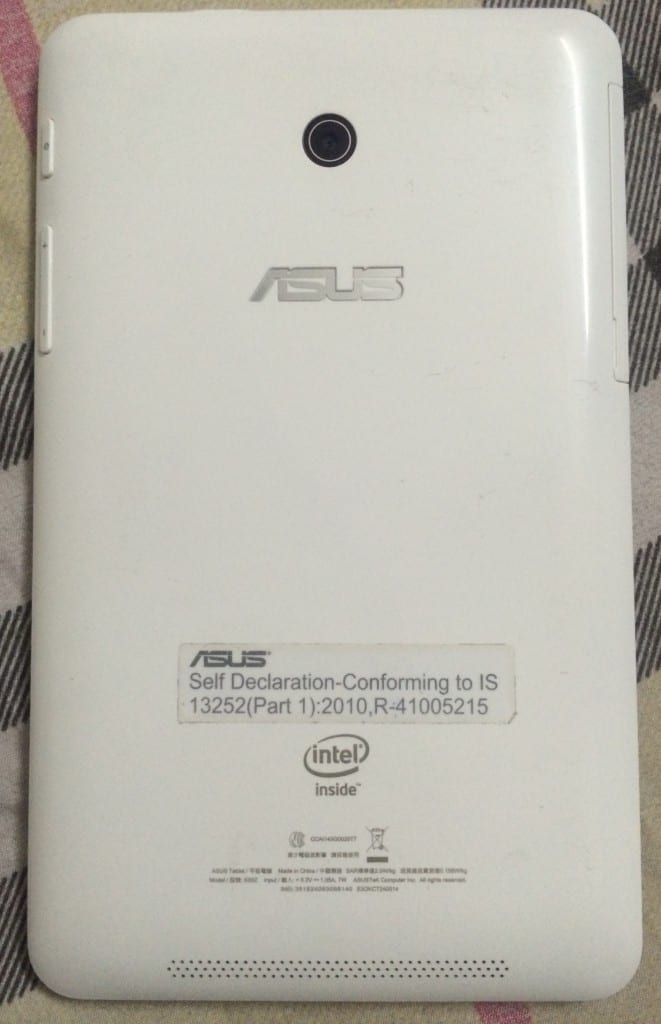 Under the hood of the Fonepad 7 Dual SIM there is a 1.2GHz dual-core Intel Atom Z2520 dual-core processor. In addition to this, it has 8 GBs of internal storage of which approximately only 5 GBs is available for the users to install the apps and other content, and this is prominently displayed at the back of the box in which the Fonepad 7 Dual SIM comes packed (and this is a first of its kind declaration I have come across). Users can expand the storage up to 64 GBs by inserting a micro SD card into the device which is fully supported. 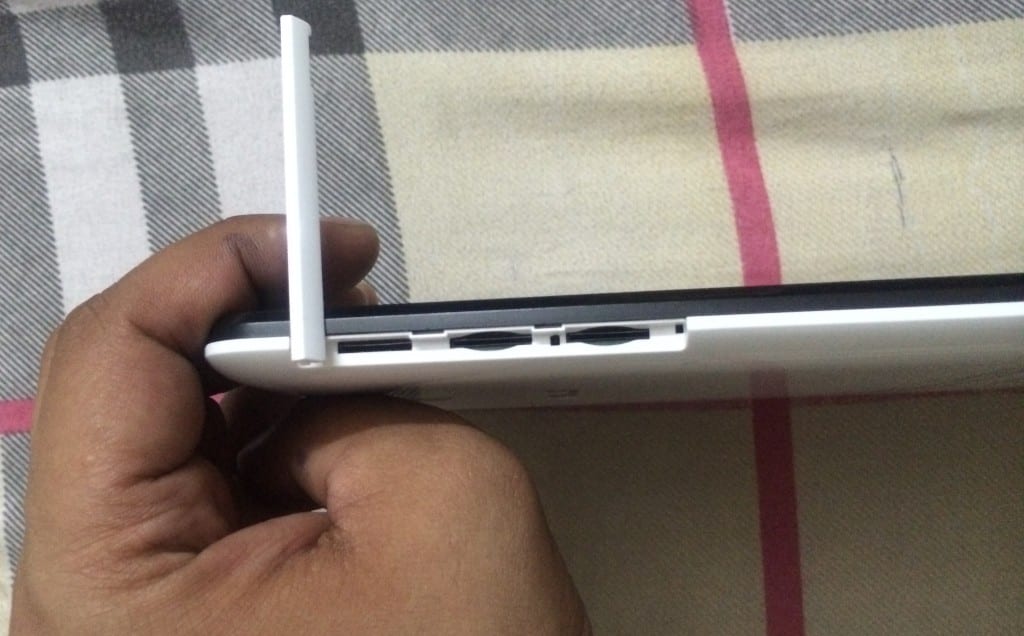 The rear of the device sports a 5 MP camera which can also record videos at 1080p, but there is an additional delight for all those who love taking selfies – a 1.2 MP front camera which captures pretty decent and relatively sharp images in comparison to any other camera of the same configuration and videos of the resolution of 720p.

The Fonepad 7 Dual SIM sports a 7-inch IPS touch screen having a resolution of 1280×800. Though it is not a full HD display, there is not much pixilation. The legibility of what’s on screen is just a little above okay under the sunlight. Images, videos and text appear to be sharp and crisp, and the touch-screen is extremely very smooth and gives a very premium feel considering the price range this device is available in.

The ASUS Fonepad 7 runs on Android Jelly Bean 4.3. The on-screen button panel -has got an added button to the standard three-button pattern of the navigation keys for launching widget-like utility apps or  “Floating Apps” which is pretty handy and helps to keep the home screen clean and organized. Floating Apps are those apps that can be opened in a smaller window size to allow multitasking across all the real estate that a 7-inch screen offers. 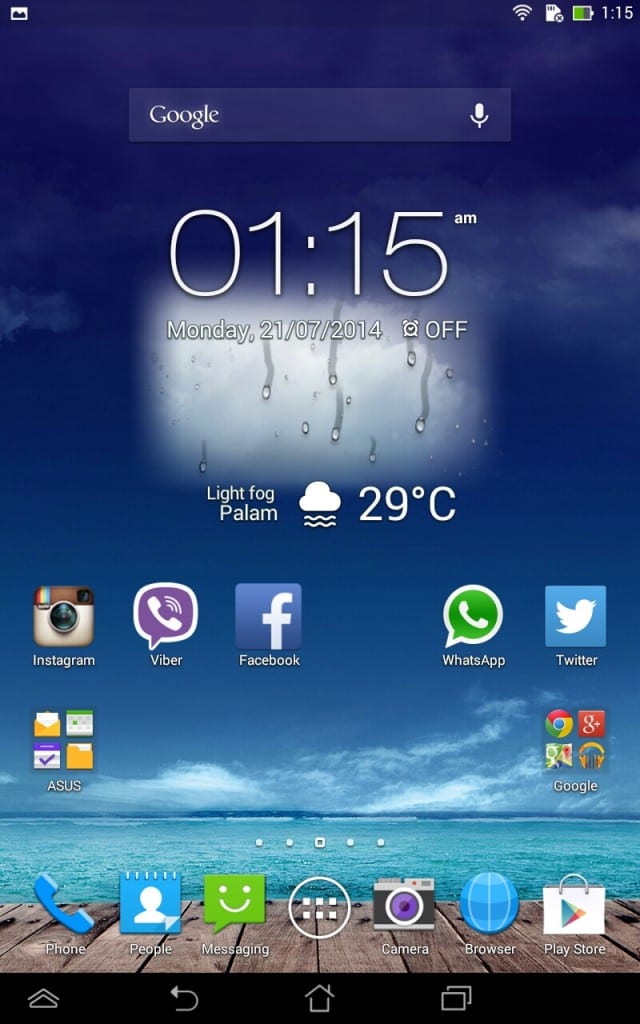 The improvised notification tray offers quick toggles for settings related to Wi-Fi, mobile data and airplane mode, among others and these can be customized as well. 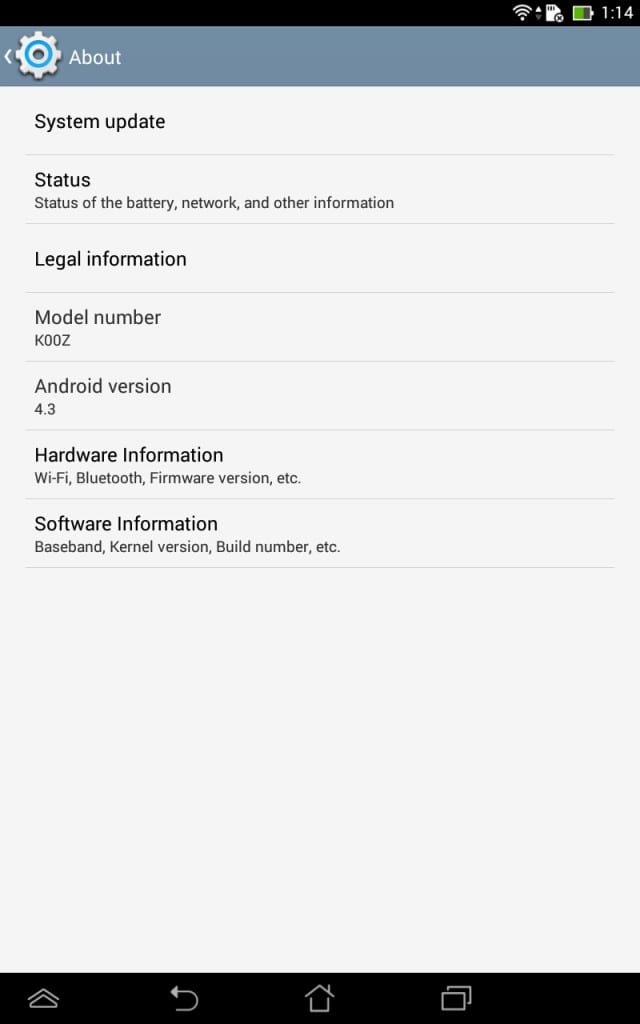 Though default apps like e-mail makes an amazing use of the just-perfect screen-size when the device is used in the landscape mode, typing too could have been fun had the black bezel around the screen was not made so wide. People with relatively smaller hands may find it a little difficult to enjoy the tablet at its best in the landscape mode.

The Camera on the Fonepad 7 Dual SIM is a little time consuming as it takes time to have a proper focus, but once the focus is established, the camera captures pretty quick images. The colours slightly go off which can be managed adjusting the white-balance manually and the device would have packed a power punch had the rear camera would have been accompanied by a decent flash which would have made it an amazing device to take pictures even in low-light conditions. 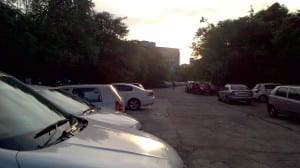 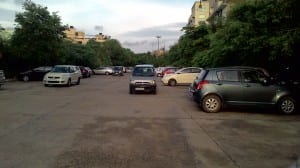 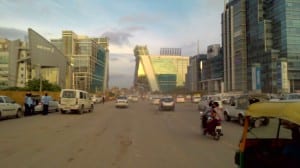 The day-to-day usage of the phablet showed almost no lag and gave pretty commendable battery lasting. With a fully charged battery, the Fonepad 7 Dual SIM is comfortably ready to last for around a day and half of regular usage including web surfing, listening to music, watching videos, replying to e-mails, gaming and other regular stuff besides the numerous phone calls. With an Intel processor under the hood of this device, games like Subway Surfer and Temple Run were very smooth with absolutely no lag, though while making a run in the Asphalt 8 had some frame drops. As the Fonepad 7 Dual SIM does not come bundled with any earphones, listening to tracks on our reference earphones was pretty impressive though playing on the speaker does hands out some disappointment as the sound was below average to enjoy music. 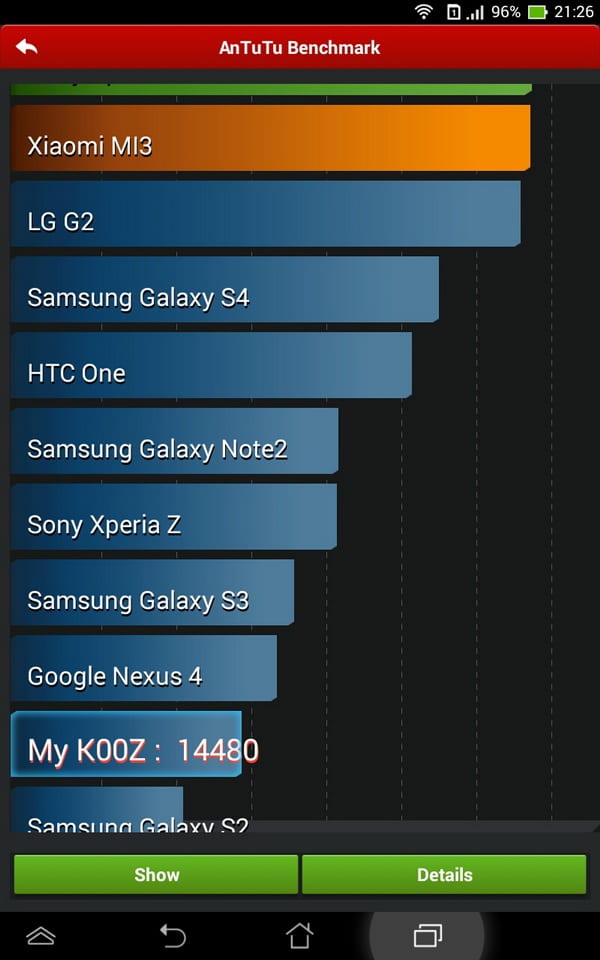 With a box price of INR12,999/-, the ASUS Fonepad 7 Dual SIM seems to be the perfect device to own. Boasting of a great battery back-up, decent camera, amazing call quality, respectable media and connectivity options and lag-free performance will put its users into the category of extremely satisfied ones and this makes the ASUS Fonepad 7 Dual SIM earns from us a badge of straight 4 Unbiased Stars out of 5! 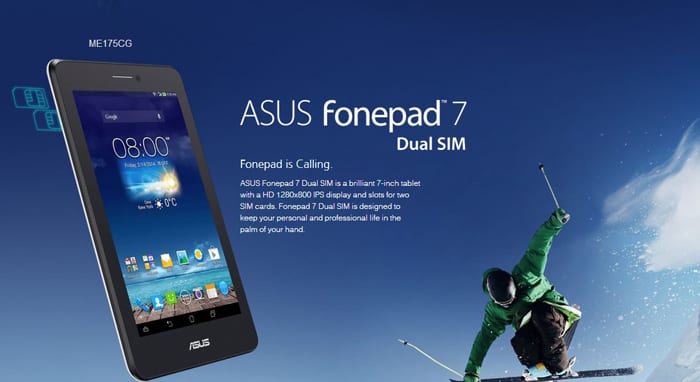