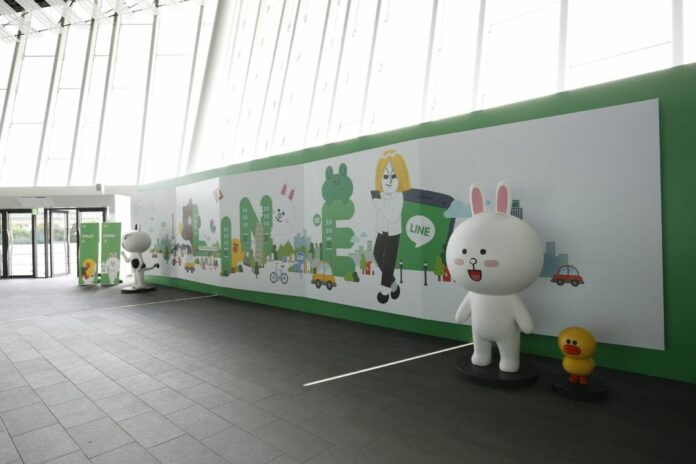 LINE, the world’s leading mobile platform with 560 million users, announced the hosting of its LINE Conference Tokyo 2014 at Maihama Amphitheatre to present its current and new business ventures.

The conference included announcements of the newest information and achievements for LINE, including their breakthrough to over 560 million global users, and a newly released figure for the amount of monthly active users (MAU), which has reached 170 million. LINE also announced its plans for the future, expressing its aim to become more integral to daily life by surpassing the boundaries between online and offline and offering a variety of new services and business ideas under the theme of “Life.”

The details of the announcements made at the conference are below: 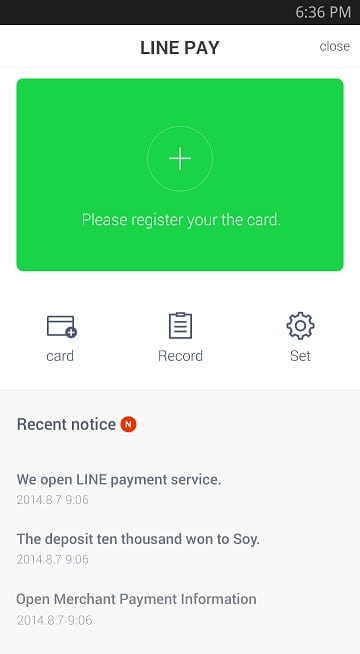 LINE Pay is a payment system that lets users pay for a variety of services by using the LINE app on their iPhone or Android smartphone, including of course LINE and related services, associated stores, web services, and apps. Payment can be made by linking credit cards, paying at convenience stores, or by adding money beforehand with an account from an associated bank (Mizuho Bank or Sumitomo Bank). Using LINE’s unique characteristics, users can split the purchase price of goods and services among their LINE friends by using the “Share Payment” feature, or even send money directly to a friend’s bank account without having to input their bank information by using the “Send Money” feature. The “Withdrawal” feature will let users deposit the money sent to them directly into their associated bank account.

Three security measures will be set in place for the service: a separate password from LINE to act as a secondary verification, fingerprint verification via Apple Touch ID (iPhone only) required to view the password, and compulsory smartphone verification to use the PC site. This security system will ensure a safe and secure payment system for users.

Planned for a winter release, payment options will be available first for LINE and related web services and apps, with expansion into offline shops and other venues planned in the future. 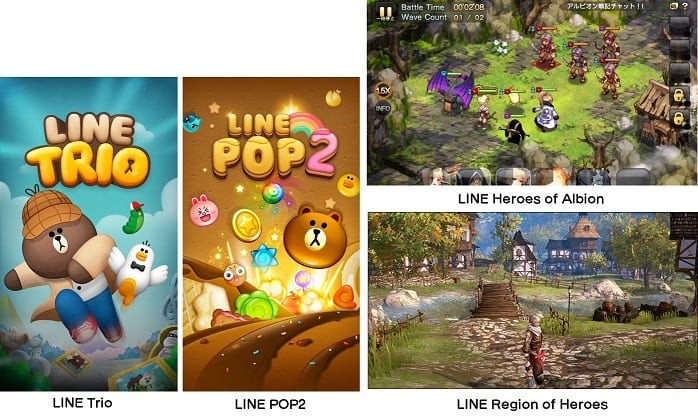 LINE’s game distribution platform LINE GAME has been built up around casual games such as LINE: Disney Tsum Tsum and LINE Rangers up until this point, and further aims to expand and succeed as a global platform by diversifying its lineup, finally offering mid-core and core games to audiences.

The basic groundwork has been laid for the establishment of two new companies, one to be co-funded by GREE, Inc. and one to be co-funded by Cyber Agent, Inc., in an effort to stimulate the development of global content. Through the establishment of these new companies, LINE will work with its partners to speed up the expansion of their businesses and bring high-quality Japanese gaming content to players around the world.

The first recipient for LINE’s investment fund, LINE Game Global Gateway, established to invest in Japanese game development companies as well as other gaming content, will be Translimit, Inc.. Combining the company’s game development prowess, which has allowed it to achieve global success in over 150 countries—especially in the United States and Asia—with games such as the competitive thinking game “BrainWars”, and LINE’s extensive global user base, they will develop new exciting game content.

Moreover, LINE will continue to improve and increase the level of convenience it offers to its users by developing its services around these new features. 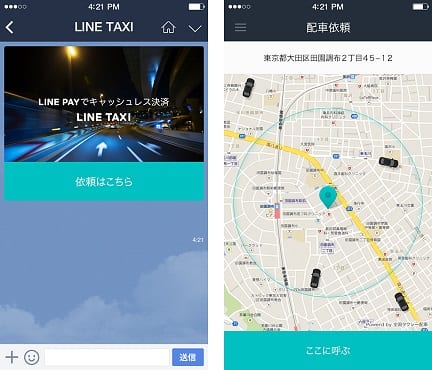 LINE TAXI will be offered in collaboration with Nihon Kotsu Co., Ltd. Users will be able to call a taxi anytime, anywhere, from within the LINE app or by using the LINE TAXI official account. Taxis will be dispatched to a certain location based on GPS info or building info and payment can be made through LINE Pay. The Tokyo-only version is planned for initial release this winter, with almost 3,300 of Nihon Kotsu’s taxis available through the service. The nationwide expansion is planned for late January, 2015, with almost 22,000 taxis becoming available through the 123 taxi operation groups associated with Nihon Kotsu through the “National Taxi Dispatch” app. The service eventually hopes to expand its business model worldwide through partnerships with taxi companies around the globe.

LINE WOW is LINE’s first ever food delivery service, with deliveries being provided by LINE Bros., a company founded as a joint investment with the Woowa Brothers Corp., which is responsible for the development of Korea’s largest food delivery app “Baedal Minjok”. The initial step of LINE WOW will be the establishment of a food delivery service offering premium lunches from world-renowned restaurants such as “Ozaki (Japanese food)” and “a nu retrouvez (French food)”. The service will open with a soft launch, offering deliveries only in the Shibuya District of Tokyo, with a gradual expansion of shops, menus, area, and delivery times. Future plans aim to use the delivery infrastructure built up through food delivery to expand into a variety of services and products. 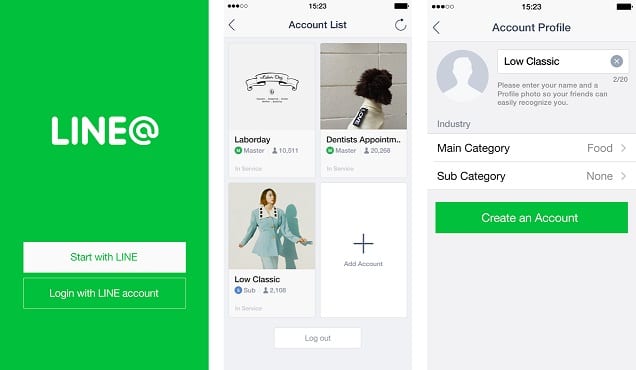 The LINE@ ID is a separate LINE account that any user can make. Separate from the regular LINE account, which was designed to offer a means of private communication between family members, friends, and classmates, this new type of account will offer a wide avenue of communication between a variety of users and customers. Both corporate and individual users can create an account without undergoing a review process, and multiple accounts can be held at once. By using the exclusive LINE@ app (support for both Android and iOS planned) to obtain an ID, users may communicate and post information through the relevant app by using 1-to-1 chats, posts to their Home and Timeline, and more.

The current service under the same name was originally intended for business accounts used by restaurants, clothiers, salons, hotels, and more, but the planned renewal of the service will open the doors to users and corporations who do not have a traditional shop, opening it up for use in a wide variety of situations.

The service is planned to start this year, and a more detailed explanation will be provided once it launches. 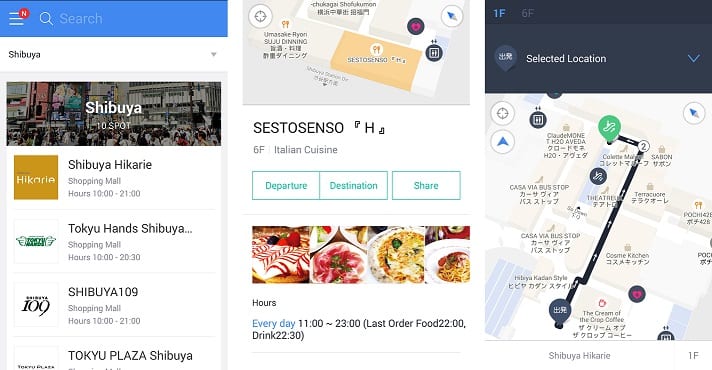 LINE Maps for Indoor is a map application that specializes in navigating through commercial buildings such as shopping centers and department stores. By selecting the shop or restaurant that they wish to go to, users can see the optimal route from their current location to their desired destination. Additional information such as shop hours, phone numbers, and shop details will be displayed, and users can also search and look for shops located in a specific building.

Service is planned to start in autumn 2014 for Android only, and at the time of release indoor maps for almost 40 locations in the Tokyo area will be available, including Shibuya Hikarie and Tokyo Midtown. Supported languages are Chinese (Simplified and Traditional), English, Japanese, and Korean, meeting the diverse needs of inbound tourists coming to Japan from overseas.

LINE MUSIC is a music streaming service whose expansion will be run by LINE MUSIC Inc. (name tentative), a company established through the triple investment of avex digital Inc., Sony Music Entertainment, Inc., and LINE Corporation. The basic details of the establishment have already been agreed to. Planned for release this year, the three companies are currently in detailed negotiations concerning the establishment of LINE MUSIC Inc.

LINE Official Blogs is a blog service that will open the doors for artists and other celebrities to participate. By creating a LINE Official Blog, they will have access to all the capabilities and options to share information of a traditional blogging service in addition to the option to link the blog to LINE’s wide array of communication services, such as LINE official accounts, LINE Mall, and LINE PLAY. This will give artists and other celebrities the chance to conduct wide-ranging promotions and merchandising. Access will be become more available to other users in the future.

For Reference: LINE’s Most Recent Figures

3. Communication Through Stickers and Messages 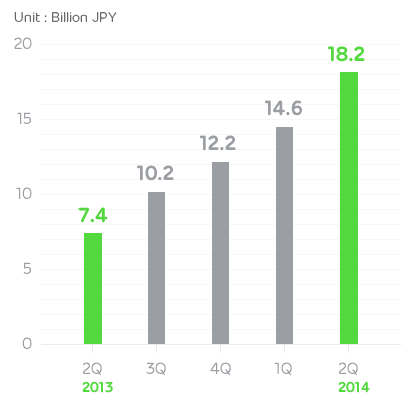