A month back, I was invited for the Samsung Galaxy Alpha launch and from the word go, I was mesmerised by the device. And the reason for my ‘love at first sight’ was Alpha’s sleek looks, metal frame, and out of the world display making it the most aesthetically pleasing Galaxy device ever.

To make sure it was not just an eye candy, I decided to get a hands on of the device and surprisingly as I held the Samsung Galaxy Alpha, I realised its feather light but at the same time very sturdy and the back looks solid & stunning. That’s certainly something I’ve missed in high-end smartphones that I’ve seen lately.

I can go on drooling about the Samsung Galaxy Alpha but first I’d like to point out why I moved from my iPhone 5s to Galaxy Alpha, and also why I didn’t go for the iPhone 6.

1) Design – Samsung proves it mettle with a ‘Metal Design’

The Galaxy Alpha looks quote similar to the iPhone 5S in terms of its metal frame which runs around the edge. It has a similarly flat surface with a shiny bevelled edge. However, the rear cover of the Alpha remains plastic. That might put off a lot of people but in my case its an advantage because I could never carry my iPhone without a case as it is delicate. Though both the iPhone 5s and the Galaxy Alpha are thin and light, the Alpha is marginally thinner, it packs a 4.7″ screen and also packs a bigger battery in that slim shell. 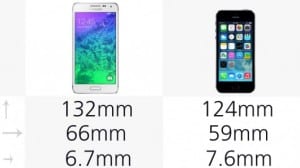 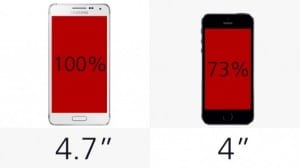 I’ve never liked smartphones that can’t be held with a single hand comfortably(allow single handle operation), as a result I never bought a phablet or a phone with big screen. For me for years, the iPhone was the perfect screen size, starting from 3.5″ of the first iPhone till 4s; to the 4″ of the iPhone 5X iterations. And that’s the reason, I got so used to the Galaxy Alpha in a jiffy. Well that was why I moved from the iPhone 5s to Galaxy Alpha. But my reason for not upgrading to the iPhone 6 was the fact that Galaxy Alpha is shorter, slimmer and thinner than the iPhone 6 and it also weighs a little less. On paper the numbers may be small, but it does feel much more compact in the hand. Oh and not forget the price difference between the 2 devices is huge. Though I wish the alpha had FHD screen if not qHD.

3) OS – Android has evolved a lot over the years, and Lollipop would be a treat on the Alpha

The ecosystems wars have definitely slowed down lately, with the Google Play Store offering pretty much all the apps, movies, music, TV shows and books that the iTunes Store does. Though there is one key difference – It’s much easier do things around on Android – things like transferring files from one device to another or a PC; though with the iOS 8, the iPhone can finally share between apps, use custom keyboards and have widgets. But what I liked with the latest version of Android and TocuhWiz after using iOS over the years is the simplicity and ease of use without restrictions. Something as basic as sharing files over BT or getting notified about a caller with Truecaller meant a lot to me.

Talking about integration, I’d not shy away from saying that there hasn’t been a better integration of devices like the Mac and iOS devices. And with the latest OS on both – Yosemite on a Mac and iOS 8 on the iPhone, things have gotten jolly good. But that’s a PC-Device level integration, and we are living in the world of wearable gadgets, where integration with a wearable piece of technology matters a lot. With Apple, we gotta wait till the Apple Watch is out or go for a third party fitness tracker or smartwatch like Pebble. But as I have a Samsung Galaxy Gear Fit – for me it has been fantastic. Most of the times, I don’t even have to take out my Alpha from my pocket to do tasks like – Check notification on every beep; track steps or heart rate; control music; Stopwatch or timer; Foursquare aka Swarm check-ins and lastly it helps me find my phone if I forget it somewhere. Though, I’d like to point it out to Samsung to allow the same thing for the Gear Fit, where we callback the Gear Fit from a connected Samsung smartphone and it would vibrate. And, Oh ya – Unlocking my smartphone automatically as soon it was in the range of the Gear Fit band.

With the iPhone, it was always my constant worry that battery would run out soon and to make matter worse if I had forgotten the charging cable somewhere, it was highly unlikely for someone to have it handy. With the Alpha, firstly the battery surprised me with each charge as it was giving me a full day pretty smoothly and also has the ‘Power Saving Modes.’ There have been instances where the Ultra Power Saving Mode saved my life even when the phone was less than 10% charged. Worse to worse, you could find someone or the other with a Micro-USB charger that has been standard on most of the devices except Apple.

Its not easy to switch from iOS to Android if you have been used to the Apple’s way of doing things, like I was. I’ve used an Apple smartphone as my primary device since the first iPhone was released but always had an Android and other OS devices as secondary devices. But what made my switch so easy and fruitful were the above mentioned reasons and also these tiny titbits that I noticed:

1) Notification Light, which is present on most of the Android devices, and for someone who has used Blackberry religiously before the iPhone came out always missed this tiny little light

2) Samsung Services and Freebies – Galaxy Apps; Magazine UI; Samsung Club (Downloaded a lot of music on the fly thanks to it); Free Subscription of popular paid mags through Magzter and a lot more

3) Features like Smart Switch, Smart Pause, Smart Stay, Private Mode, Multi Window, you can continue working even when a call comes and sorting of Gallery by apps, screenshots etc are things makes iPhone gasping for more

But as we all know nothing is perfect so I’d like to point out the things that could have been better: