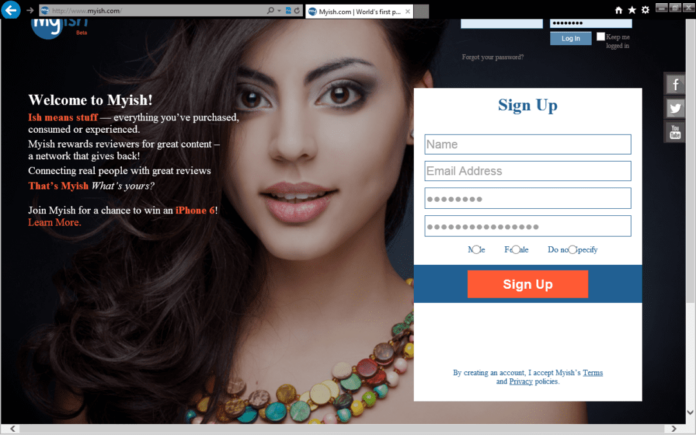 Living on to the ‘Make in India’ dream by our Prime Minister, Mr. Narendra Modi, we finally have a product that’s equivalent to the global competition but is made in India for the people of India.

Myish.com, the world’s first photo-sharing review network, goes live today to engage you in reviewing, following and liking stuff, and getting rewarded for it. The name ‘Myish’ revolves round the word ‘Ish’, which means stuff and hence Myish stands for “My stuff”. The company targets to tap the growing market of 18 to 40-somethings who love to share their “ISH” with each other.

Myish is the only truly social platform for reviews. The social layer is developed to create trust among the users and add authenticity to the reviews. Their search algorithms are designed to show relevant search results with reviews from friends of the users in addition to the reviews from general people. Myish rewards users for sharing valuable content based on the gamification element that is built into the product offering. The website can be accessed at www.myish.com. The Myish app is available on the Google Play Store (compatible with Android 2.2 and above) and will be available on the iPhone App Store next week (compatible with iOS 6 and above).

Founded in November 2012, Myish Inc. is the brainchild of three young entrepreneurs: Mr. Vincent Alton (Founder), Mr. Dhawal Sehgal (Head – Digital Marketing) and Mr. Rishi Rais (Head – Technology & Analytics). The organization is currently self-funded as they position themselves favourably for a Seed Round of funding.

The non-optimal structure of currently available review platforms seemed inadequate to Alton. With the aim to de-clutter the internet review landscape, the trio planned to build a unified go-to-source platform, where users could find trusted reviews on everything including apparels, accessories, auto, food, entertainment and more. Commenting on the launch, Vincent Alton says, “Owing to the non-optimal nature of the review platforms that litter the internet landscape, we wanted to build a unified go-to source where users could find trusted reviews on everything. With Myish, our idea is to make writing reviews fun and develop trust among users for the reviews they search online. Sensing significant growth and opportunities in India, I decided to launch our Indian-built platform in its home country, India.”

According to the market validation, the founding team conducted a ground level survey with product prototype in hand. Speaking to 1000’s of potential users about the platform and asking questions pertaining to the viability of Myish and whether or not they would use such a platform, the result was better than they expected. More than 75% of respondents said they would use Myish, for the value found in the platform and a need for it in the market.

Myish team claims to have identified emerging demographics of users who according to Vincent are keen to engage themselves to upload their candid clicks and get them followed and rewarded by others.