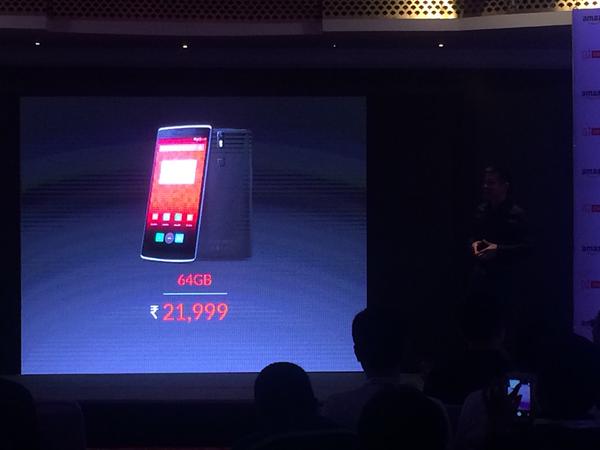 OnePlus has launched its much awaited ‘Flagship Killer’ One (Sandstone Black) in India at Rs. 21,999 for the 64GB version, a good Rs. 4000 less from the expected price of Rs. 24,999/- . Sadly, the 16GB (Silk White) version will not be available in India. Living by  invite system, India will follow suite and the smartphone will be available via invites exclusively on Amazon.in starting today. Amazon has also announced a 10-day return policy. Specially for India, OnePlus and Amazon have been integrated so that invites claimed by a OnePlus account can be used to purchase the smartphone on the Amazon OnePlus One page. Alternatively you can head to oneplus.net/in and register  for a OnePlus One invite. Interestingly, the India launch with an ‘entirely new team and model’ is the ‘Next Chapter’ for the firm. With India being first outside the company’s headquarters to have a physical presence, its really great news for India fans and community members of One Plus One.

In India, One Plus would be led by Vikas Agarwal as the General Manager of OnePlus India. Vikas stated that India is the first country since the OnePlus One’s launch in April in 17 countries where they will be offering localised service infrastructure for both walk-in and phone support to users. Taking a cue from the competition, the company has also started selling accessories of the OnePlus One on Amazon India starting today. Though at the moment – only Bamboo StyleSwap Cover, Flip Cover, and Silver Bullet Earphones would be available. So if you want the Screen Protector, Protective Case, Clear Case, and JBL E1+ Earphones then you would have to wait a bit more. Amit Agarwal, Vice President and Country Manager, Amazon India, added, “We are very excited to bring this much awaited phone for our customers in India. And we are having real fun with the unique marketing initiatives for the launch. It fits right into our philosophy of bringing wide and unique selections and experiences for our customers.”

Pete Lau, CEO of OnePlus,surprised every one at the launch, “Our company focuses first on our users and our product. We want to provide the best possible experience for our Indian users who have been so supportive of our vision. To do that, we are investing heavily in our Indian operations and partnering with the fastest growing and most admirable e-commerce company in the market, Amazon.in.” The OnePlus One runs Cyanogen 11S or CM 11S, with the ‘S’ signifying the customisation for the One smartphone. Notably, CM 11S is based on Android 4.4 KitKat, while the company has issued several OTA updates bringing bug fixes and new features in the interim, with the latest in November taking it to CM 11S 44S.


There have been talks going about major implications about the OnePlus One India Cyanogen version since the Micromax and Cyanogen exclusive deal. But the smartphone will launch with CM 11S in India, no further updates will be available via OTA but users can always download them from the One Plus One community.

OnePlus has also assured it will roll out a community version of a custom build of Android 5.0 Lollipop to Indian users by December. The Flagship Killer comes with these components: So if you really want to buy the One Plus One, head to Amazon India and follow the instructions to get an invite. Also dont forget to keep your fingers crossed once you have applied for an invite.