Indian arm of the Chinese smartphone maker Xiaomi has launched its Mi4 priced at Rs 19,999 today. Till now, Mi India has launched the Redmi 1S, Redmi Note and Mi3 in partnership with Flipkart.

Even though the Indian consumers get Xiaomi devices after months of its international launch, the excitement doesn’t seem to fizzle out. Recently, Xiaomi has launched its flagship smartphones, the Mi Note and Mi Note Pro, at an event in Beijing last week. And, we finally get the Mi4 now, which launched more than 6 months ago in China. 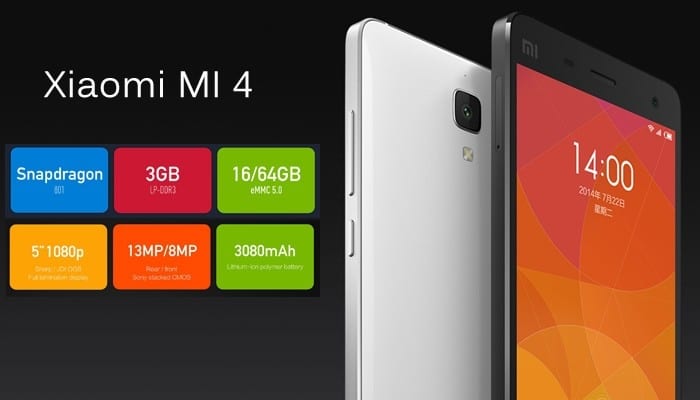 Moving on the to the specs of the Xiaomi Mi 4. It sports a 5-inch IPS display with a resolution of 1920 x 1080 pixels at 441 ppi along with Corning Gorilla Glass 3 protection. It runs on a 2.5 GHz quad-core Qualcomm Snapdragon 801 CPU with 3GB RAM. In the OS department, it runs on Android 4.4.3 KitKat overlay with MIUI 6 on top, the phone will offer a 13MP rear camera along with an 8M front camera. The rear camera will support 4K video recording.

On the connectivity front, Xiaomi Mi 4 will support 4G LTE network along with 3G, WiFi, and Bluetooth and is powered by a 3080 mAh battery.

You will be to buy the Mi4 devices in a similar fashion as the previous Xiaomi devices were sold on Flipkart.