Ranbir Kapoor to generate buzz about the A6000 on digital media 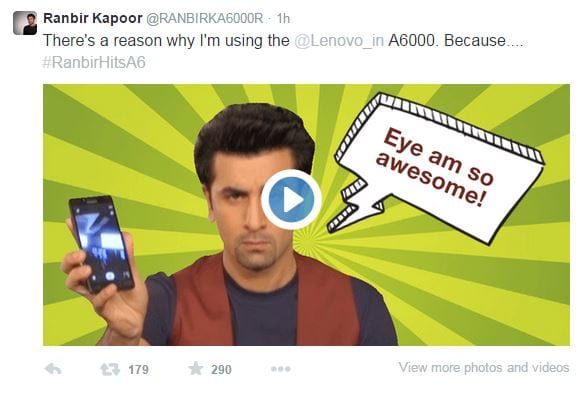 To drive buzz around the launch of Lenovo A6000 4G phone, Lenovo India today collaborated with its brand ambassador Ranbir Kapoor to generate buzz & awareness about the A6000 on digital media.

Lenovo created six social media channels online under the campaign plank #RanbirhitsA6. Ranbir has been tweeting for 6 hours on his Snapdragon powered 4G LTE Lenovo A6000 smartphone. This is perhaps the most value for money LTE device in India; the A6000 promises the perfect balance of speed, performance and ergonomics.

Ranbir was excited to be on all the leading social media channels. He interacted with his fans by asking them questions on interesting profiles to follow on twitter. He shared his coffee moment picture and posted his selfie picture for the fans with the Lenovo smartphone on Instagram. He also shared a video blooper for his trolls on twitter and facebook. While accessing Vine he was feeling a little lost so he uploaded a video and asked his fans to guide him through it. On Snapchat, he imitated the angel emoji. Ranbir was seen having a lot of fun through the day exploring the world of digital media for the first time.

Bhaskar Choudhuri, Director – marketing Lenovo said, “This is a unique innovation by any brand. Lenovo has leveraged Ranbir, its brand ambassador to engage with his huge fan base in a creative way through Lenovo’s  4G LTE A6000 smartphone. What better way could there be than to to reach out to our consumers, interact and engage with them in an interesting manner.

“We are getting a great response and even before the activity started “Welcome to twitter Ranbir” was trending in India and globally for 24 hours.  #RanbirhitsA6 is trending right now in India and on a second straight day Lenovo brand campaign # RanbirhitsA6 continues to trend in the top three trends, he added.

Bollywood star, Ranbir Kapoor said, “I have been social media shy and when Lenovo came up with the idea of going Live on social media I was more than happy to join the brigade. It is an exciting experience for me connecting with the millennials”.

You can follow Ranbir on the social channels below: