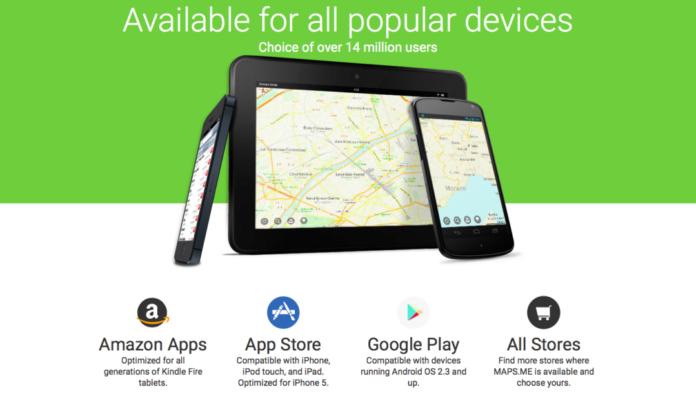 Mail.Ru today announced that MAPS.ME has crossed the milestone of 14 million installs globally and what’s equally significant is that India has emerged as one of the most downloaded maps by users of the app. Data gathered from users downloading the app across the Eurasian market has revealed that the map of India has been one of the most popular downloads amongst its user base, while globally the app has achieved an additional 7 million downloads since December 2014.

India’s recent economic stability and global business treaties fortify the nation as a potential business powerhouse, further corroborating the popularity of the country amongst markets of Russia, UAE, Saudi Arabia and Singapore. Hence it justifies the proclivity of users in these markets downloading the map for business or leisure purposes.

Further data from the app shows that users in India are downloading maps to countries of UAE, Singapore and USA. Contrary to the popular belief that Indians are solely seeking holiday destinations around the world, the app has thrown light to the fact that users prefer exploring business destinations instead.

Following its acquisition by Mail.Ru Group, MAPS.ME, previously $4.99 and listed among Google Play Best Apps of 2014, was made available at no charge on major mobile platforms, which helped fuel a dramatic uptick in both app downloads and usage. In 2014 alone, the app is estimated to have saved its users over $50 million on roaming charges, based on average fees for 1 MB of roaming. Also in 2014, MAPS.ME users downloaded more than 11 million maps, worldwide.

Since its initial launch in 2011, MAPS.ME has provided a new standard for fast, crowd-sourced, fully offline mapping and directions. The MAPS.ME app for iOS and Android allows users to download detailed maps for any location around the world and use them even when offline. The service pulls data provided by OpenStreetMap, the open source project dedicated to creating a crowdsourced, highly detailed world map, community by community. Thanks to an advanced data compression algorithm, MAPS.ME works fast and the maps are lightweight. The apps are actively used all over the world, with the top three locations by number of installs being Russia (12%), the US (9%) and Germany (6%). MAPS.ME is one of the top rated apps in the Travel category in more than 100 countries.

“It’s not enough to build a great piece of technology. You have to continue to support your community of users, and work with them to deliver the best version of the product possible. We’ve been committed to this since day one, and it’s incredibly validating to see this pay off,” said Yuri Melnichek,Head of Maps Business Unit, Mail.Ru Group, “These numbers show that there is strong demand for an alternative to Google Maps – one that is fast, lightweight, and has powerful offline capability. We will continue to innovate and expand our service in 2015, with the goal of becoming the top mapping tool based on OpenStreetMap worldwide. ”

“We feel that the partnership between Mail.Ru and MAPS.ME offers tremendous benefits to our users, and these numbers validate that strategy,” said Dmitry Grishin, CEO of Mail.Ru Group. “And we believe that the future of mapping will be built by a global community contributing to the OpenStreetMap project.”

OpenStreetMap is created and updated by editors, just like Wikipedia articles; users all over the globe can edit maps, adding cities, roads and locations. This crowdsourced model allows for the most detailed and current map of the world. For instance, new buildings and roads can be added in real time, and the editors can add not just streets, but also paths. The maps are constantly updated by the global community of enthusiasts that has grown exponentially to 1.8 million members.