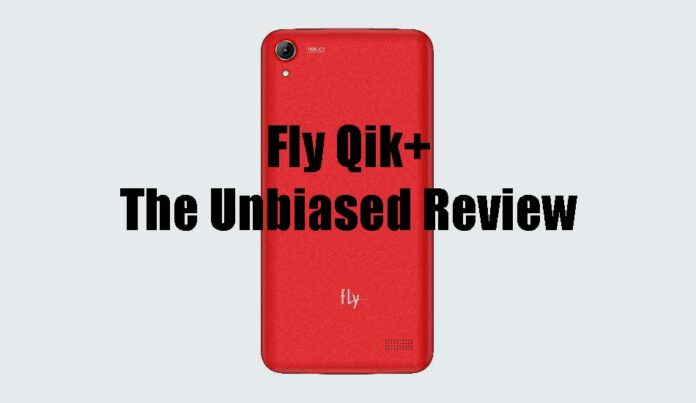 Fly – The UK-based giant has released it’s flagship Qik + and it is one of the cheapest Octa-core phone out there. Not only that, it also supports dual sim and sports a large 5-inch display.

The price is one of it’s most enticing features. Priced at just Rs.6,999 It packs high-end specs which the user will definitely like.

The phone looks trendy in the hand with the complete black look similar to that of the nexus. It packs in the features of pure android in the Kitkat environment and provides a lag free and simple UI.

We will cover all about it in the review.

The Qik+ comes in a white cardboard box with the earphone piece provided by Fly and the regular user manual along with the device itself. It also comes with a one-year warranty card. The travel charger is present along with a standard USB 2.0 cable.

The phone has a complete black look which we have usually seen in phones like the Nexus and the OnePlus One. It has no physical buttons and includes 3 capacitive buttons at the bottom of the screen which light up dimly when used. The right and the left sides of the phone include the power button and the volume rocker respectively.

The back of the phone sports the speaker and a 13-megapixel camera along with the flash. The back looks like metal when seen from a distance, but is actually made up of plastic.

The overall display of the phone is average looking as it looks a little out of fashion with the glossy back which frequently invites smudges and is also prone to scratches providing an unsafe usage. However it is very slim and also light which feels good in the pocket.

The screen is a 5 inch HD IPS display on the paper, but the display is not very vibrant and has poor viewing angles and does not perform well under sunlight as well. The phone comes in grey and fiery red colour which looks good and looks spectacularly similar to Asus Zenfone. The back and the 2200 mAh battery are removable and 2 sim card slots are available. The micro sd card slot is also available which can be expanded up to 32 GB.

The Fly flagship has a MediaTek processor of 1.7 Ghz octa core with 1 Gb of ram. The phone’s dimensions are 136.30 x 71.50 x 7.80 with a weight of just 98.80 grams which no doubt feels light in the hand. The device has a 5-inch display with no hardware buttons which makes it easy to use with just one hand and at the same time provides the comfort of a big screen.

The Qik+ provides a pure android experience which gives a clean and lag-free experience to the user but at the same time feels a little tacky after regular use.

It boots up in just 22 seconds which is pretty fast as compared to other high-end devices. The phone is currently running on Android version 4.4.2 ( Kitkat ) but is expecting an update very soon.

The 2200 mAh battery was completely charged in just 50 minutes which is quite impressive. At 100%, you can easily squeeze the Qik+ for the whole day at an average use. The battery lasts from about 10-12 hours after heavy usage. The phone lagged between powerful games like Asphalt 8, Riptide GT and Dead Trigger. However, it ran Asphalt 8 at low settings seamlessly. But being a budget phone you cannot expect it to perform like the high end phones.

The 13-megapixel camera did not live up to it’s reputation as the pictures were not able to grasp the colours as it should have. The Samsung’s standard 8-megapixel camera provided the very same results. Here are some camera samples –

Definitely the Qik Plus is better option when compared to the Qik, especially when the difference between the price is so less.

The Qik+ offers good specs and usage given it’s price range, but Fly is a newcomer when it comes to smartphones and the lack of service centres will be a bane for the people. Also there are many other competitor brands like Asus, Motorola, Huwaei and Micromax that provide better phones at the same price and offer better service as well.

Therefore, if Fly wants to thrive, then it will have to work hard on it’s range of smartphones and after sales services and reach up to the level of it’s competitor brands.