The Unbiased Blog
Home News ‘Love The Past, Play The Future’: PES 2016 announced

From its humble origins on PSOne, the PES series has leaped from format to format, adding ever more realism as it evolved. This heritage has been celebrated in PES 2016’s new tagline ‘Love The Past, Play The Future’, highlighting the series’ recent return to core PES values in last year’s PES 2015 and focusing on the many new gameplay and presentational elements that will further establish the series as the definitive football experience. 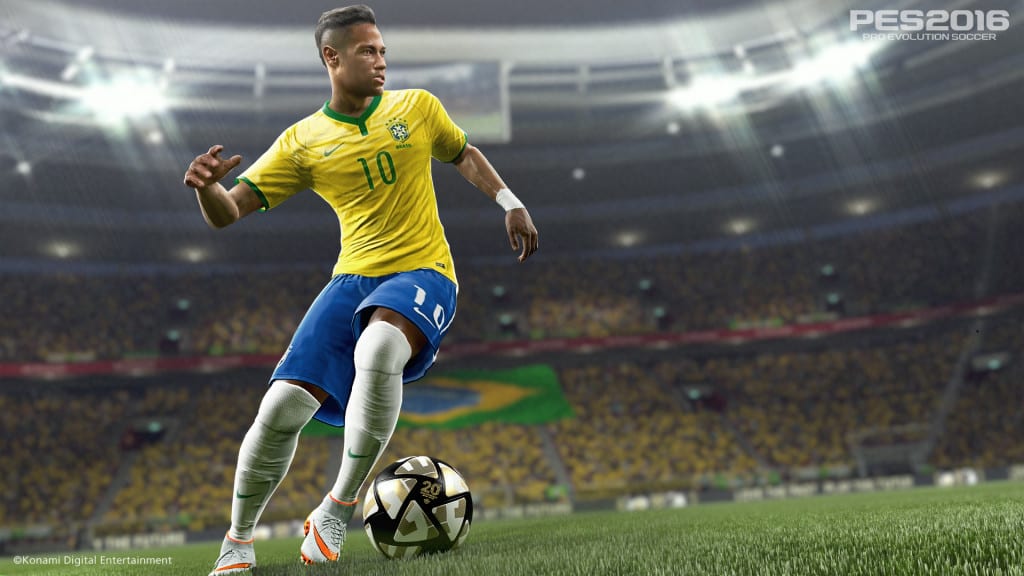 PES 2016 aims to retain its title of ‘Best Sports Game’, as voted across the world at games shows and by major media outlets in 2014, by continuing to lead the way in the recreation of ‘The Beautiful Game’. The series aims to go back to its roots to create an exciting match between users, and proudly present PES 2016 to deliver quality gameplay following ‘The Pitch is Ours’ mantra. From further integration of the industry leading Fox Engine to bring the on-pitch action to life and the full commitment to centre the product around creating the best gameplay experience, to the full redevelopment of Master League, every facet of the game has been enhanced to deliver yet another outstanding product.

Fresh Gameplay – Exciting advancements reaffirming the PES series as having the No.1 gameplay.

»         Advanced Collision System – The physicality of the modern game has been realised in PES 2016 with a significantly improved collision system, calculating how players interact, creating a unique outcome depending on type of impact.

»         Aerial Strength – With the new physicality system, aerial battles are a completely unique experience this year. Use the left stick to battle the opposition to disrupt a larger more powerful player, or find the best position to make the header/volley.

»         1v1 Control – In PES 2016 the 1v1 player control have been enhanced, offering a wide range of movements with the existing controls. Response times have been improved allowing players to manoeuvre in tight situations, which also benefits the upgraded feint moves that allow sudden directional change that can cause defenders to lose their balance. The 1 on 1 situations now offer a great leap in exciting table-turning outcomes. Just as the real pitch offers opportunities for those brave enough to perform, players can pull off precise action, flexibly manoeuvre and pull away from the defender. Technique and timing lead to the defender to lose his balance, and creates great chances just as you pictured.

»         Perfect Defence – Performing a tackle at the perfect time will powerfully shove the player out of the way to secure the ball.The ball will immediately be yours, creating direct turnarounds and counter opportunities.

»         Intelligent Player AI – 2-3 player combination play will be available by the improved concept of team strategy, which depends on the type of tactic you set for your team. Players no longer are reliant on manually triggering a 1-2, with teammates intelligently running off passes into space.

»         Goal Keeper ID – In a bid to improve quality and add unique individuality in performance, new goal keeper parameters have been added, that now vary in Catching, Clearance, Collapsing and Deflecting. This adds character to the players, who you can count on catching the ball rather than punching, or are better at stopping close range shots.

»         Celebration Control – New for the series, players have full control over goal celebrations to maximize their excitement when scoring! Prompts appear after a goal to trigger a trademark celebration, or unique actions at the press of a button.

»         New Master League – The famous and hugely popular Master League sees a total revamp, allowing users to immerse themselves in the managerial world of soccer. Every element has been redesigned or reworked, from the vibrant and involving menus to the new and exciting player transfer system, PES 2016 see one of the series most integral modes redefine the single player experience.

»         New Visuals – Incorporating the many advancements of the Fox Engine the visuals have seen a huge upgrade. See the rain splash as players slide in to win possession, or the turf kick up as you strike the ball into the top corner. New night-time lighting and real turf textures add to some of the many improvements.

»         Dynamic Weather – For the first time in the PES series, dynamic weather has been introduced, with the chance of rain starting during the game. Combined with the ever more realistic ball physics, the rain changes how the game can be played with passes speeding up, and players less skilled to struggle with trapping. The defender taken by the 1 on 1 will be covered with pitch blades by slipping and falling. This feature is applied to all offline modes including the Master League, becoming an important element to decide the outcome of the match.

»         Human Motion – Seeking to humanize player movement, 3x new animations have been added to bring the in-game superstars to life. Goalkeepers have seen an abundance of save animations added, while outfield players shoot, pass, dribble and tackle in a countless variety depending on the situation. Players complain when a foul isn’t given, or lament a teammate when a pass isn’t made when in open space. The new 1v1 control also benefits from this, with players being able to fool their opponents with shimmies and feints that can result in causing the opposing player to lose his balance and fall in the wrong direction!

»         New Ball Physics – The past few years has seen the series make huge advancements in ball physics, and for PES 2016new levels of realism have been reached. Each spin, bobble and ricochet has been calculated using real ball physic data, helping keep every moment in every game unique and unpredictable.

Quality Improvements – Many important elements are upgraded per fan feedback.

»         myClub – Since the launch of the mode in PES 2015, myClub has been updated on a weekly basis, and now have been further improved based on user feedback for PES 2016. The enhancement will introduce player level systems, and players exclusive to the mode. Use GP acquired through matches or myClub coins to experience realistic club management combined with players to strive to be stronger in your squad. Choose the manager, consider coaches, and build the strategy based on what you aim with your team. Build Your Team, Create Your legacy!

»         Dynamic Wide Camera Angle – The new angle gives you a larger field of view, allowing you to better plan and adjust your players to compete in aerial battles, or see the intelligent runs being made thanks to Intelligent Player AI. Depending on where the ball is on the pitch, the camera will tilt and zoom in/out to make sure the user has the best view possible during the match.

»         Commentary – New commentators have been introduced for both UK and Germany, with Peter Drury and Marco Hagemann joining the PES team. An abundance of new lines and specific stories have been recorded dedicated for Master League, responding to player transfers, player growth and team performance.

»         PS4 Image Importing – Edit mode is synonymous with the PES series, and further updates have been made to this hugely popular mode. PS4 (and PS3) users are now able to import images into the game perfectly replicating any team kit or emblem the user wishes – including managers.

Pre-Order Content – Get ahead in myClub by pre-ordering now.

PES 2016 will also exclusively retain its use of the UEFA Champions League club competition, which was announced recently. This new 3 year partnership allows KONAMI to feature both the UEFA Champions League and UEFA Europa League club competitions within its many options, with both featured as individual modes or within the larger season overview upon qualification – with the UEFA Super Cup featured within the iconic Master League mode.

Further details of PES 2016’s content – including a rewards program for current myClub users crossing over this year – will follow, with new information and screenshots released at E3 next week.

“PES 2016 will be the best game in the series,” explained Erik Bladinieres, European Brand Director of Football at Konami Digital Entertainment B.V. “This is solely due to the passionate feedback and support from our users and the community, which helped us get back to the core of what PES is. We truly believe with PES 2016 we will continue to celebrate the history of PES and everything it stands for, and create a new level of quality that has never been reached by any football game. Here’s to another 20 years!”