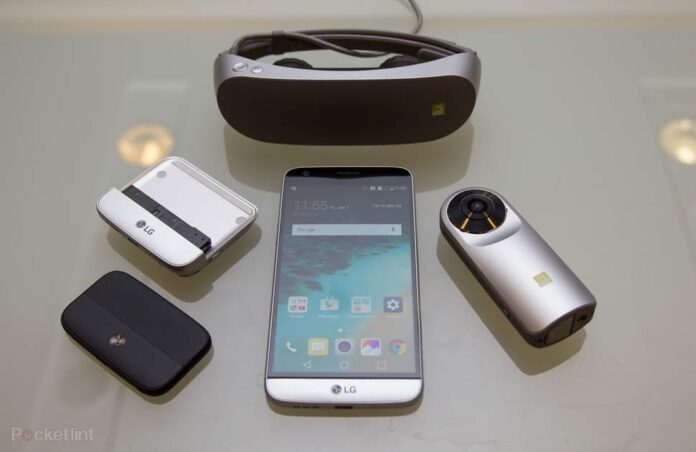 LG’s 2016 Flagship LG G5 was announced back in MWC in february and finally it has made its way to India Today. LG G5 is the one of the first company’s to come up with modular design. LG G5 comes with a sleek metal uni-body featuring a Slide-out battery and a Modular Type design that gives a greater smartphone experience. G5 is also accompanied with LG Friends(Modules), a collection of companion devices like LG CAM Plus, LG 360 CAM and LG 360 VR. There is a dual camera setup on the back which packs a 16MP primary f/1.8 lens, also an additional 8MP 135-degree wide-angle f/2.4 lens that can be used together or separately to create some magnificent landscape shots. Additionally, the phone offers OIS (Optical Image Stailization), laser autofocus, LED flash, and an 8MP front facing camera. The rear houses a Fingerprint sensor embeded with power button. At the event Mr Kim Ki Wan, MD, LG Electronics India, said “We are really proud to bring the LG G5 to India. With this smart phone, we are living up to our promise of Innovation for a Better Life; LG has always brought something really innovative to the world of smartphones. This year yet again with G5, we have come up with a very unique concept of modular smart phone. This phone will certainly amaze the smart phone users with its ability to be transformed into multiple devices like digital camera, Hi-Fi player and more. G5 will certainly redefine smart phone experience for consumers.” The LG G5 is available in four color variants including Titan, Silver, Gold and Pink priced at of Rs 52,990 with a free extra battery and a charging cradle. The LG G5 is will be direct competition with Samsung S7/S7 Edge and recently launched HTC 10. Which one these 4 would you buy? Do let us know in comment section below. For all latest tech updates follow us on twitter.