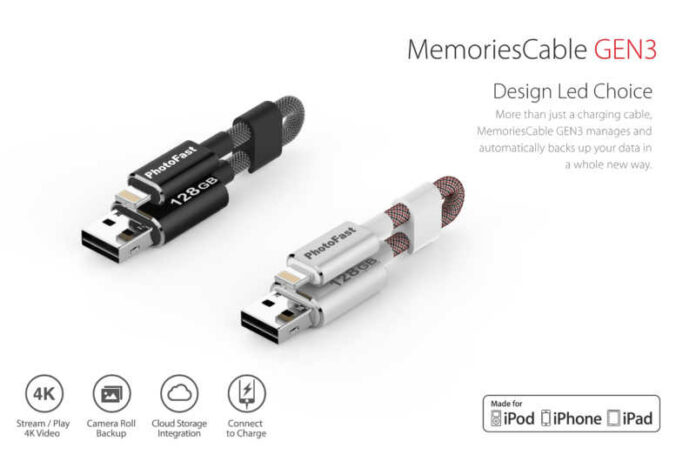 PhotoFast has announced the MemoriesCable Generation 3. Compared to the first generation of MemoriesCable, which is the World’s first iPhone and iPad charging cable with built in memory storage allowing users to backup, copy favorite media files or stream movies to their Apple device while charging at the same time. The latest addition to the MemoriesCable family now has a braided nylon mesh cable adding strength and robustness as well as a fresh look in two different color options; black with silver combination and a black and red braided design that makes stylish and feels of superior quality.

It comes with USB 3.0 and you can manage data on the go and charge using a power bank, laptop or wall socket. iOS users will be able to choose from 32GB, 64GB and 128GB capacities of additional storage, allowing them to upload photos, videos, music, movies, business presentations and more at lightning speeds. MemoriesCable is compatible with the PhotoFast ONE App that lets you manage the storage easily. The PhotoFast MemoriesCable allows users to handle large data file types between their MemoriesCable and iPhone or iPad. In addition users have access to cloud storage such as Dropbox, Google Drive, iCloud Drive and Microsoft Onedrive so that they can directly upload data and share with a few simple taps. PhotoFast also puts a large emphasis on security by implementing Touch ID technology for the App as well as passcode security for the MemoriesCable to ensure business users and private users alike always have their data secure and protected.

“We all know the importance of our photos and memories, however making backups always seems to be of low priority to users. Integrating memory into an everyday product like a cable seemed like the logical answer to ensure users have extra storage space for the devices wherever they may be,” commented Warren Wang, CEO of PhotoFast. Wang further added, “Based on the success of our first MemoriesCable design we wanted to enhance the look and feel as well as giving users added strength to ensure the MemoriesCable could handle being used multiple times per day”.

The PhotoFast MemoriesCable GEN3 is available now, with 3 storage capacities: 32GB, 64GB and 128GB. Buy it from here.