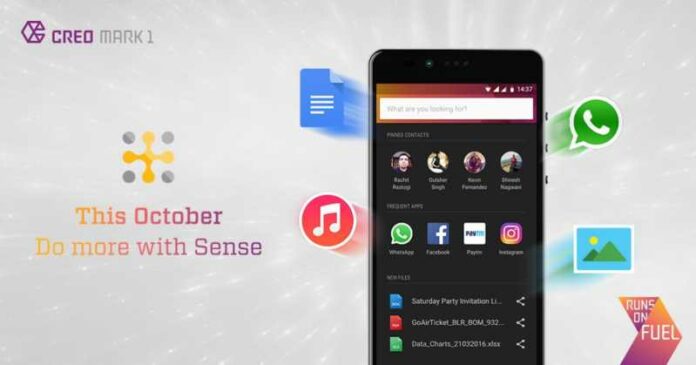 Bangalore-based Smartphone startup CREO today has announced its latest Monthly update to its own Android Lollipop based Operating System  FUEL OS.With the latest update, FUEL OS users can quick and easy access to recent files, photos, and apps. Last month’s update for Fuel OS got features like transfer files between their FUEL OS mobile device to their PC / Laptop seamlessly.

The October update also offers many bug fixes in addition to minor improvements to make a major usage impact. Some improvements on network stabilizations enable slightly faster data speeds. To update FUEL OS, users will have to open the ReFuel app on CREO Mark 1, then tap on the top left menu followed by the ‘Updates Tab’. The update process will start once users click on ‘Check for updates’ on the Updates screen. This October, CREO aims to make it easier for their FUEL OS users to access their recent files, photos, apps and more. Fuel OS’s flagship feature – Sense –  now does even more, just like its users.

Apart from these, the October update also offers various under the hood fixes leading to overall performance improvement of the FUEL OS.