The Unbiased Blog
Home News Tech What is Digital Unlocked and how Google is digitally empowering Small and... 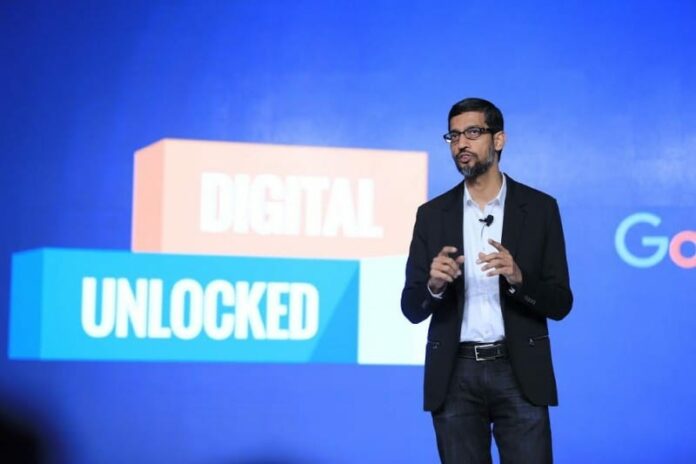 A few days ago we were invited to Google India’s event titled Digital Unlocked. The invite had Google’s CEO, Sundar Pichai on the speaker’s list. We immediately knew that something big was to be announced. But the announcement turned out to be bigger than our expectations as Pichai

During his address, Sundar Pichai said, “The Internet is a powerful equalizer and we are motivated to bring the benefits of information and technology to as many people as possible. Building for everyone and making it available in the hands of as many people is at the heart and core of what we do. And we do this by investing in open ecosystems.”

Referring specifically to small and medium businesses, Pichai added, “the Internet and digital technology will be an engine of growth for the Indian economy. Today, anyone can become an entrepreneur, a developer, or a creator, but it is important that they have the right tools and skills to digitize. We believe it is important for us to invest in training and equipping these individuals and small businesses to accelerate their journey of growth.”

Setting the context for the initiative Google unveiled a joint research study with KPMG titled “Impact of internet and digitization on SMBs in India”. The study reiterates that 68% of the 51m Indian SMBs are offline. Highlighting the macroeconomic impact of the internet, the research found that rising penetration and greater uptake for digital by SMBs could help increase their contribution to India’s GDP by 10 percentage points, taking it up to 46-48% by 2020. Ascertaining the benefits of going digital for small businesses, it determined that profits of digitally engaged SMBs grow twice as fast compared to offline SMBs. Likewise digitally engaged businesses are able to grow their customer base significantly with 52% catering to customers beyond their home city versus only 29% offline SMBs. The report cites the lack of understanding of the benefits of digital technologies and technical skills as the essential reasons for being offline.

On stage @sundarpichai CEO @Google with #SMB & #SME’s from India, talking about how Google MyBusiness helped them #DigitalUnlocked pic.twitter.com/yRM15qOBzC

Honourable Minister of Law & Justice, Information Technology, Ravi Shankar Prasad applauded Google’s constant efforts to work in the vision of Prime Minister’s vision of Digital India. And, also shared that “In 1.5 years there been 42 manufacturing units that have come up. Employing 100,000 people directly and 300,000 indirectly.” He also said, “@Google is as much India’s as it is America’s.” 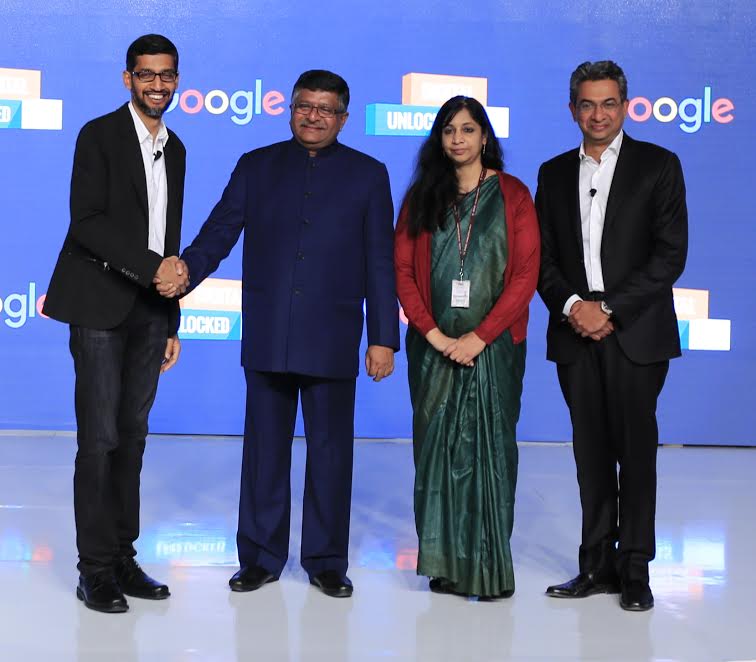 To address the gap, Google announced the launch of Digital Unlocked, a training program to empower thousands of Indian SMBs with essential digital skills that will enable them to get online and start using the power of the internet to grow their business. Google also previewed My Business Websites, an easy-to-use offering to help businesses to have a rich, mobile optimised digital presence that will be launched later this year.

On stage Sapna Chadha, Head of Marketing, India & SE Asia @Google talking about how only 6% of Indian #SMB’s have a website #DigitalUnlocked pic.twitter.com/gpnOWmkiuY

With Digital Unlocked, Google is committed to ensuring that every single small business in India that wants to go digital has access to quality training. In keeping with the varied learning needs of the millions of businesses in India, we’ve built this program across online, offline and mobile.  The offline training is being conducted in partnership with FICCI and over the next three years, 5,000 workshops will be held across 40 Indian cities. The online training comprises a set of 90 self-paced video tutorials, curated specifically for India and is available free of charge at g.co/digitalunlocked. The tutorials cover a comprehensive set of topics ranging from building a web presence and driving online growth to reaching customers over mobile and video. The trainings are certified by Google, Indian School of Business and FICCI.

Further, for India’s mobile-first audience, Google also launched Primer, a free mobile app uniquely designed to teach digital marketing skills in a quick, easy and interactive way. It is available for download through the Google Play and iOS app store. Primer also works offline and is currently available in English and Hindi with Tamil, Telugu and Marathi versions coming shortly.

At the event, Google also previewed My Business Websites, aimed at equipping the vast majority of small businesses with a simple way to start their digital journey by creating a free, mobile optimised website, easily and instantly. Available for Google My Business users later in the year, this new feature will provide simple, templated, editable websites for small businesses created from their data and photos on Google Maps. My Business Websites will be available in English, Hindi, Bengali, Telugu, Marathi, Tamil, Urdu, Gujarati, Kannada, and Malayalam.

Several small businesses that have leveraged Google’s products and technologies were also present at the event. Three of them – Walnut, Go Co-op and Maganlal Dresswalla – were in conversation with Sundar Pichai and shared their journey to digital using Google offerings including Google My Business, Google AdWords as well as the Google Cloud Platform.

The announcement is a continuation of Google’s efforts to support Digital India. Last year Google had launched Google My Business, a program aimed at helping small medium businesses get an online presence on Google Search and Google Maps, without having to invest in a website or domain. Over 8 million Indian SMBs are already on these platforms, with thousands more coming online every month.