XOLO has unveiled its latest 4G VoLTE enabled smartphone Era 2X for the Indian market. XOLO Era 2X is first ever smartphone in XOLO’s Era series to accompany a fingerprint sensor. The smartphone comes in two variants of 2GB and 3GB RAM, priced at INR 6,666 and INR 7,499 respectively. The device will be exclusively available on Flipkart from 9th Jan onwards.

The fingerprint sensor is located on the rear panel of the phone, the sensor can register up to 5 IDs and can also facilitate multiple functions like unlocking the phone, launching the camera, unlocking gallery, capturing photos and answering calls. 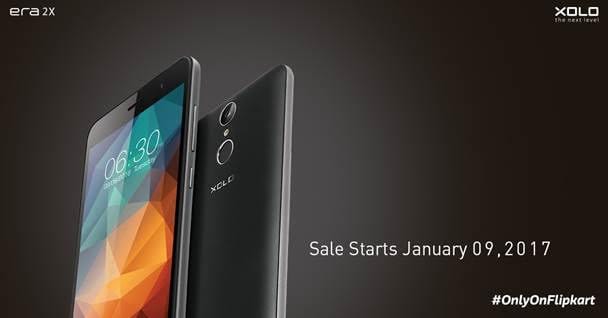 It is powered by 1.25GHz 64-Bit Quad-Core Processor and comes with Android 6.0 Marshmallow out of the box, packs in a 2,500mAh battery. The device comes in two colour variants – Black Gun Metal and Latte Gold. The Flipkart exclusive Era 2X will be available on sale from 9th January.

Talking on the occasion, Mr. Sunil Raina, Business Head, XOLO said, “We are very excited at the launch of XOLO Era 2X-our first Era smartphone with fingerprint sensor. Ever since the launch of Era series around one and half years back, catering to the needs of tech enthusiastic millennials, we have endeavored to deliver great smartphone experience for XOLO customers. With Era 2X XOLO offers a bouquet of benefits like security, performance, experience & convenience to its users.”