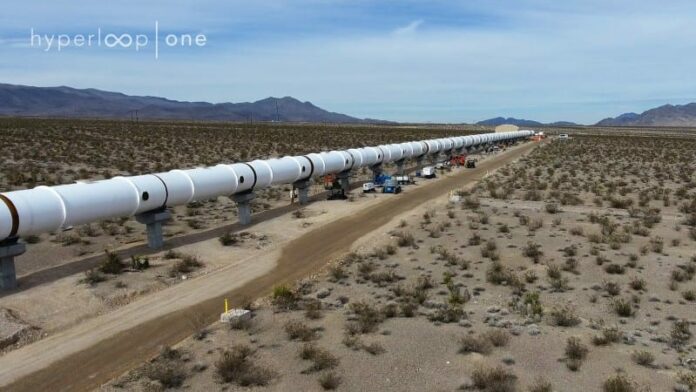 Hyperloop One, the world’s first operational Hyperloop has released never-before-seen images of its development site (DevLoop) in the Nevada Desert at Middle East Rail, held in Dubai. Providing the international keynote address at the 11th annual conference, CEO of Hyperloop One, Rob Lloyd, shared a bird’s-eye view of how construction is progressing at the world’s only full-system and full-scale Hyperloop test site, proving the company is well-positioned to deliver the first working Hyperloop.
The 500 meter-long DevLoop, which has a diameter of 3.3 meters is located 30 minutes from Las Vegas in the Nevada desert. The company is expected to perform a public trial in the first half of 2017. The DevLoop trial will follow Hyperloop One’s first public test of a prototype propulsion system, which took place in the same area less than twelve months ago in May 2016.

Speaking at the conference, Lloyd also shared the company’s vision for how Hyperloop One could transform the future of the Gulf Cooperation Council (GCC) with a faster, more efficient and cleaner system of mobility. A Hyperloop system is a new mode of transportation, capable of connecting to all modes of existing transportation and helping individuals be anywhere and move anything with on-demand autonomous transport. A Hyperloop One system would ease pressure on existing infrastructure and presents the potential for the Middle East to reinvent and transform transportation.
Not only will a Hyperloop system benefit the GCC economically, but socially, by facilitating easier access to critical infrastructures such as hospitals and schools, expanding access to city attractions and unlocking urban development. It could create a UAE pan-urban area within a 30-minute Hyperloop reach between Abu Dhabi, Dubai and Al Ain.
Benefits of Hyperloop include higher standards of safety than a passenger jet, close to half the construction and lower maintenance costs than high-speed rail and energy usage that is similar to a bicycle per kilogram-kilometer. Hyperloop One estimates that around 4,000 vehicles travel every day between Abu Dhabi & Dubai, with traffic congestion in Dubai costing the economy $800 million in lost working hours. Reducing this commute to 12 minutes opens a whole new realm of options, and Hyperloop One shows an investment in a UAE Hyperloop network could unlock economic value 3.5 to 4 times over high-speed rail.
Hyperloop One has announced a series of achievements in the last 12 months, demonstrating the company’s rapid progress in developing the new form of transportation. One week ago, Hyperloop One convened a landmark innovation summit – The Hyperloop One Vision for India ­– in New Delhi, discussing how the company could integrate with and augment India’s vast transportation network with reliable, clean and on-demand autonomous transport, connecting India’s major cities at faster-than-airline speeds.
Follow us on twitter for more news and updates.