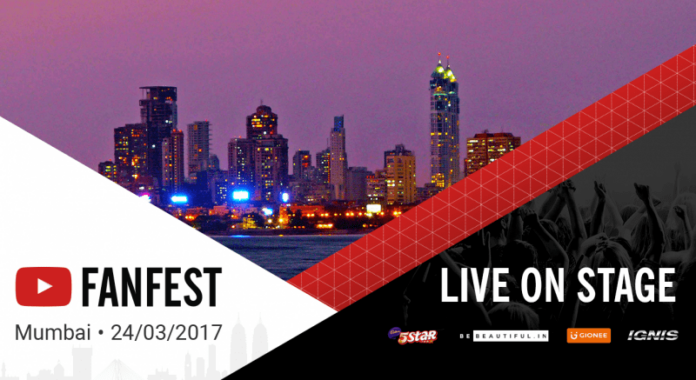 In the past three years, YouTube FanFest has become the biggest annual event for fans to meet their favourite YouTube stars in person and see them perform live in India. This year, YouTube FanFest is set to take centre stage on Friday, March 24th, 2017 at JioGarden, Bandra Kurla Complex in Mumbai. Over 5,000 fans will come face-to-face with some of YouTube’s biggest stars performing live on stage.

All free general admission tickets are now available on http://www.youtubefanfest.com/2017-in. Further tickets will be made available in the coming days via sponsors and announcements on @youtubefanfest. For those who can’t make the live show in person, YouTube FanFest will be live streamed on YouTube at FanFest channel.

“We’re delighted to announce the lineup of the incredibly talented YouTube creators who will be joining us for the fourth YouTube FanFest in Mumbai. YouTube FanFest has truly become our marquee event to celebrate YouTube creators from India and around the world. We’re excited to see (and hear) the excitement that YouTube creators drum up among thousands of fans!”  said David Powell, Director of Online Partner Development, YouTube Asia Pacific.

“With some of the most exciting local and international talent performing side by side for some of the world’s craziest fans it’s no surprise that Mumbai is one of the biggest stops on the global YouTube FanFest calendar and we’re thrilled to be coming back for our fourth year.” said Jasper Donat, CEO of Branded.

“I’m pumped that I’m coming back to Mumbai for the fourth YouTube FanFest—the Mumbai fans are totally fabulous and I’m excited to perform for them again!” said Kurt Hugo Schneider