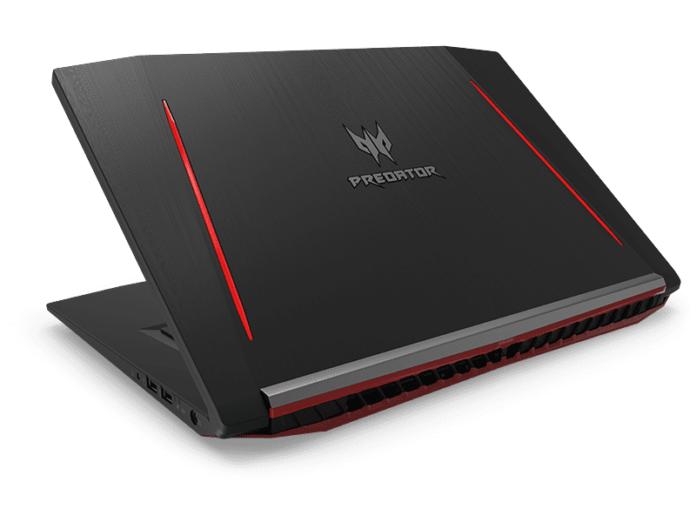 At Acer’s next@acer global press conference in New York, Acer announced its new Predator Helios 300 gaming notebook line. The gaming machines are available with 15.6-inch or 17.3-inch displays. It comes in matte black chassis with red accents. These laptops will be shipping with Windows 10.

At the heart of the Predator Helios 300 is an overclockable NVIDIA GeForce GTX 1060 or 1050Ti GPU combined with a 7th Gen Intel Core i7 or i5 processor for better performance. All of this processing power is supported with up to 16GB of DDR4 RAM, which is further upgradable to 32GB. It comes with speedy SATA SSD and a 1TB HDD. There is an access compartment door on the bottom of the notebooks which makes it easy to upgrade memory and storage components. Predator Helios 300 notebook line is ideally suited for both gaming and movie watching. It comes with a bright 15.6-inch or 17.3-inch FHD IPS displays that provide vibrant, vivid imagery, while Dolby Audio Premium and Acer TrueHarmony deliver immersive audio with crisp, rich acoustics. It also comes with Skype for Business Certification and Cortana. For better gameplay on the machine, it comes with a dual fan system featuring an AeroBlade 3D Fan with ultra-thin metal blades keeps the notebook running at optimal temperatures. The preloaded PredatorSense software provides real-time system information and overclocking, so gamers can monitor and control the system’s vitals from one central interface.

The connectivity options on the Predator Helios 300 includes a USB 3.1 Type-C port, a USB 3.0 port (featuring power-off USB charging), two USB 2.0 ports, and an HDMI 2.0 connection.  It connects wirelessly through fast 2×2 802.11ac technology and also includes a Gigabit Ethernet port for those preferring a hard-wired connection

What gaming laptop are you using or which gaming laptop do you like? Do let us know in the comments section below or tweet to us on @theunbiasedblog.