Abhibus.com, one of country’s fastest growing online bus ticketing company, has launched a new service that offers onboard entertainment service to bus travellers. A unique feature of this movie onboard product, Abhimovies, is that bus travellers can watch movies of their choice without the need of internet.

‘Abhimovies’ brings a new feature which allows every passenger to watch a movie of their choice on any device. The technology uses own WI-FI network without any data charges incurred by any customer watching onboard a bus. Movie content is pre-loaded on the app and updated frequently. Bus operator can offer this product via Abhibus EDGE, the cloud-based software for operators to manage inventory, bus tracking facility and detailed reports to take greater over business control. 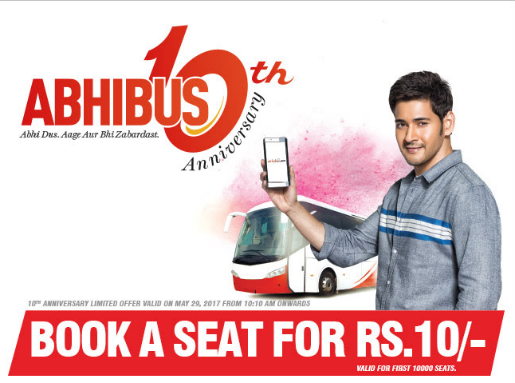 Also, Abhibus achieved a milestone as the company completed its 10th anniversary. AbhiBus was founded on May 29, 2017, on a simple idea to allow Indian bus travellers to book bus tickets at a click, from the convenience of their homes and offices. To celebrate the 10th anniversary, Abhibus today launched a special discount, offering 10,000 seats at only Rs 10/seat.

“We felt passengers get limited onboard entertainment choice. Abhimovies will fill this gap. What is most exciting feature is that travellers don’t need to spend their internet data pack to watch these movies,” said Mr. Sudhakar Reddy, CEO and Founder, Abhibus.

“Our pilot launch shows Abhimovies has become quite popular among bus travellers across our network, especially among people choosing long-journey,” he added.

“On our 10th anniversary, we would like to thank our loyal travel buddies, for helping us reach this milestone. As a small token for gratitude we are offering 10,000 seats at only Rs 10 per seat. The offer is limited to the first 10,000 customers starting today from 10:10 am onwards,” said Mr Reddy.

“At present, Abhibus has the maximum inventory of 14 lakh seats, that includes private and public sector bus operators, to choose from on any given day. We have also introduced travel now and pay later option that allows travellers to pay Abhibus after they have availed the service,” said Mr. Reddy.