Chromebooks are getting more power with support to run millions of Android apps natively of lately, though this machines may not be popular in India, it is one of the most popular machines in United states. Today, Acer has announced a new Chromebook with a bigger display and battery life. The new Chromebook 15 will start at $399 and will be available in the US in October.

The Chromebook 15 will come with a 15.6-inch full HD IPS display, it is powered by the latest dual-core Intel Celeron and quad-core Intel Pentium processors. It will be available in 32 GB or 64 GB of eMMC storage as well as 4 GB or 8 GB of RAM options. The new Acer Chromebook 15 delivers battery life of up to 12 hours so it can be used for a full day of work or school plus streaming and fun. It comes with the fanless design that allows it to run quietly. There is an HD webcam with a wide 88-degree field of view for video calls. Also, audio and video are clear and crisp thanks to high dynamic range imaging and the built-in microphone. 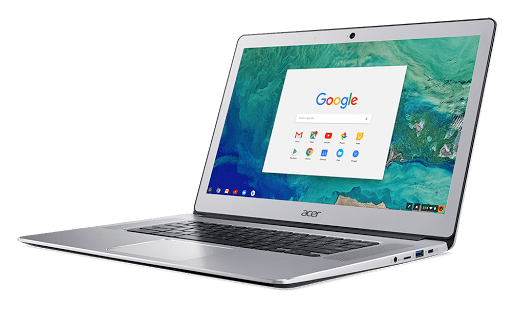 The Chromebook 15 will support Android apps via the Google Play Store when it is launched, so customers will have access to more than two million Android apps to let them have more fun, be entertained, stay connected and remain connected. The Chromebook is thinner and lighter than previous generations. It features a backlit keyboard and weighs 1.72 kg. Other features include Wireless-AC (802.11ac) featuring 2×2 MIMO technology, 2 X USB 3.1 Gen 1 Type-C ports, Bluetooth 4.2, two USB 3.0, an HDMI port and a combo headphone/speaker jack. The SD card reader supports up to 128 GB SDXC for transferring and saving files.