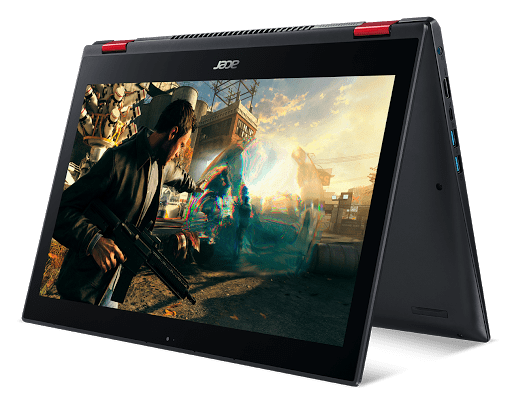 Acer has launched a new gaming laptop in its Spin series that come with NVIDIA GeForce GTX 1050 graphics and fast GDDR5 VRAM. Nitro by Acer is a gaming series and the Nitro Spin 5 is a convertible gaming Notebook. The Notebook starts at INR 79,990 and is available on Flipkart and retail chains and Acer Exclusive stores across India.

The Acer Nitro 5 Spin flaunts a 15.6-inch FHD IPS display, it is powered by 8th Generation Intel Core i7 or i5 processors, NVIDIA GeForce GTX 1050 graphics and GDDR5 VRAM for faster operations. It comes with 256GB SSD and 1TB HDD. The Notebook houses two front-facing speakers, a subwoofer and delivers audio for gaming or movies in any of the four modes. The keyboards on the Nitro 5 Spin are backlit keyboard. Also, it comes with a fingerprint scanner with Windows Hello support. Acer’s omnidirectional ExoAmp Antenna optimizes the antenna position to ensure a stable wireless signal, regardless of the antenna being located beneath the notebook’s metal cover and the direction the device is facing. It also includes MU-MIMO (Multi-User Multi-Input Multi-Output) wireless technology for up to three times faster downloads, smoother streaming, and a better browsing experience. The device is Paired with Dolby Audio Premium, Acer true harmony, and Acer Smart Amplifier. In addition, the audio and video will automatically reverse based on screen orientation; this ensures that the speakers are never blocked and the audio and visuals are always facing the viewer, no matter which way the display is positioned.