Nokia 8 is finally available in India for customers, it was launched on August18, 2017 in the UK and was announced in India on  September 26, 2017, in India. It is now available on Amazon for INR 36,999 in Polished Blue, Steel and
Tempered Blue color options. Also, the device will be available at Croma, Reliance, Sangeetha Mobiles, Poorvika, BigC and more outlets pan India. An additional 100GB Jio 4G data on Nokia 8 and additional 10GB 4G data with every recharge of INR 309 or above.

The Nokia 8 comes with a 5.3-inch display with Quad HD resolution and Corning Gorilla Glass 5 protection up front. Under the hood, it is powered by the latest Snapdragon 835 processor which is clocked at 2.45Ghz and is coupled with Adreno 540 GPU. It is equipped with 4GB of RAM and comes in only one variant of 64GB with microSD card support up to 256GB. The device runs on Android 7.1.1 Nougat with no bloatware and Nokia has also promised that it will be one of the first smartphones to get the latest Android O update. Also, Nokia will provide the monthly Android security patches on time.

In the camera department, there is a dual 13MP setup at the rear, one being the RGB sensor and the other one is a Monochrome sensor. The primary sensor is equipped with OIS and as reported earlier these are the Zeiss optics. The rear camera comes with 1.12um pixel size, f/2.0 aperture, 76.9-degree wide-angle lens, PDAF and dual tone LED flash. The front camera houses a 13MP with ZEISS optics, PDAF, 1.12um pixel size, f/2.0 aperture, screen flash and 78.4-degree lens. The device comes with a dual-sight technology, which Nokia calls as Bothie. It allows Nokia 8 to capture and do Live broadcast on Facebook and YouTube from both the front and rear camera simultaneously. 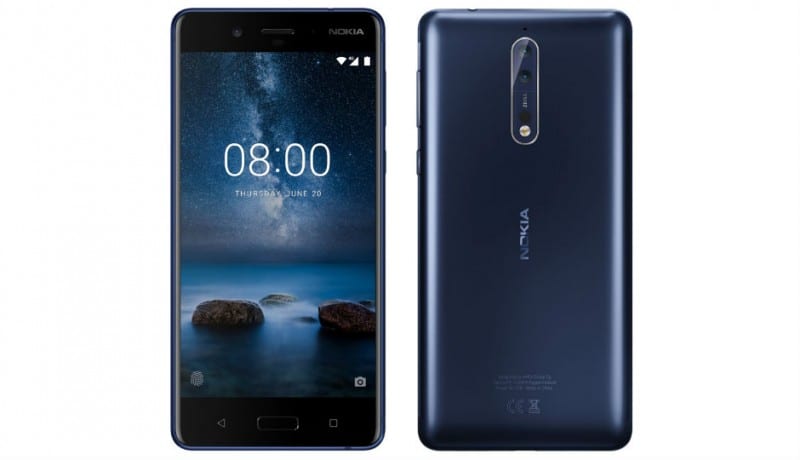 The smartphone is backed by a 3090mAh battery with Qualcomm Quick Charge 3.0 support and comes with USB Type-C port. The fingerprint scanner is placed on the front, which also doubles up as the home button. Other features of the device are OZO Audio, Nokia 8 combines three microphones to capture audio with immersive 360° spatial surround sound. Nokia 8 is the first smartphone to feature Nokia OZO Audio. OZO spatial 360° audio brings a fully immersive audio experience to videos.