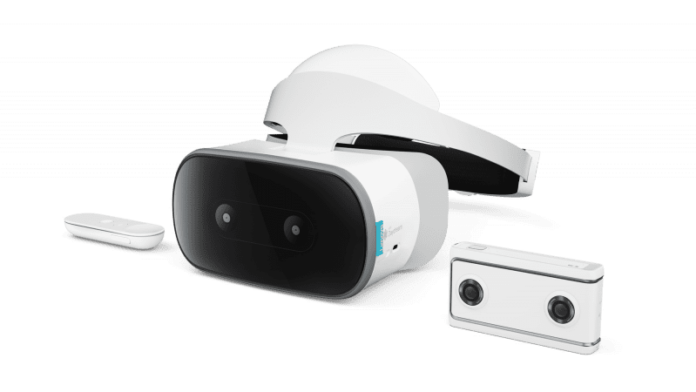 At the ongoing CES 2018, Lenovo has announced the world’s first standalone VR headset, Mirage Solo that gives you the VR experience without being tethered to any wires. The headset is powered by Qualcomm Snapdragon 835 VR platform, it can handle the most demanding VR experiences. Another product announced by the company, the Lenovo Mirage Camera simplifies VR content creation with easy video or image capture and wireless upload to the user’s Google Photos and YouTube account.

When combined, this duo enables innovative, new technologies such as Google’s motion-tracking technology WorldSense and VR180 to everyday users. This takes away the need for specialized virtual reality videography skills and professional camera gear to shoot immersive 3D VR videos and photos. Lenovo Mirage Solo users will be the first to experience the full potential of motion-tracking technology, called WorldSense, on Google’s Daydream virtual reality platform. WorldSense lets you move around and explore your virtual environments as if you’re truly there – leaning, dodging or ducking through space. For example, you can immerse yourself in wide-ranging content, from learning more about the Acropolis at Athens by exploring the ancient Greek citadel in person or search for clues to unravel a mystery surrounding fugitive Replicants in the congested streets of Blade Runner. The Lenovo Mirage Camera and Lenovo Mirage Solo with Daydream complement each other for users interested in immersive VR but who want affordable prices, high-quality content and simple set-up. A compact point-and-shoot camera, the Lenovo Mirage Camera, slips right into your pocket and supports YouTube’s new VR180 video format. Its dual 13MP fisheye cameras achieve depth in image and video by capturing the same images at slightly different angles to form a 3D effect, in which near objects look near, while far objects appear far. The two lenses also offer a 180 x 180-degree field of view to let you see more.