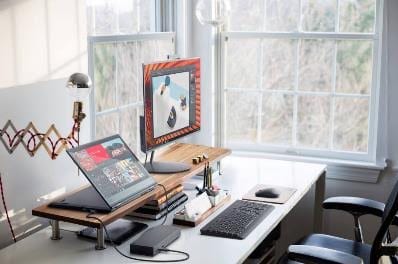 Lenovo has announced refreshed lineup of their thin and light laptops in India. The all-new Thinkpad series was unveiled today which include Thinkpad X1, Thinkpad T, X, and L series laptops. All the latest portfolio are powered by the Intel’s 8th gen processor.

The Thinkpad series laptops are pretty popular in productivity area and come with HDR display and USB Type-C support. The ThinkPad X1 Carbon is the world’s Lightest 14-Inch laptop, it comes with a 14-inch Full HD IPS display with touch support and Dolby Vision. It is powered by up to 8th generation Intel Core i7 with vPro and Intel UHD  620 GPU, up to 16GB RAM, up to 1TB SSD. It can give up to 15.5 hours of battery life, it includes 2 x USB 3.0, 2 x Intel Thunderbolt 3, 1 x 4-in-1 micro SD card reader (SD, MMC, SDHC, SDXC), 1 x HDMI port. Enhanced security features with a Match-on-Chip fingerprint sensor that handles biometric processing secures and simplifies the Windows Hello login experience with a new face recognition Infrared camera.

ThinkPad X1 Yoga has up to Intel Core i7 with vPro processors and the Dolby Vision HDR display. The notebook can be used in 4 different modes as seen on other Yoga laptops. It comes with up to 16GB RAM, up to 1TB SSD and connectivity options are similar to what is available on the ThinkPad X1 Carbon. ThinkPad X1 Yoga has an integrated 54Wh battery that is claimed to deliver up to 15 hours of usage on a signal charge. Further, it comes with an integrated pen and Global LTE-A capability.

Further, the ThinkPad X280 features a 12.5-inch display that comes with options including FHD IPS touch display. It is powered by up to Intel Core i7 with vPro, alongside up to 16GB DDR4 RAM and 1TB SSD. The notebook has Dolby Premium Audio and a 720p HD camera, with an option for IR Camera and ThinkShutter cover. Connectivity options include Wi-Fi 802.11ac, Bluetooth v4.1, two USB 3.0, a USB Type-C, Thunderbolt 3, HDMI, and RJ45 connector. There is a built-in battery that lasts for up to 16.6 hours.

The ThinkPad X380 Yoga features a 13.3-inch FHD IPS touch display. The processor, RAM, storage, and connectivity are similar to that of the ThinkPad X280.  The notebook features a 51Wh battery that is can deliver up to 13.6 hours of power on a single charge, it also has the RapidCharge technology. Further, Lenovo has included an Active Pen that an IR camera with Windows Hello support. Furthermore, the ThinkPad T480 comes with a 14-inch display with up to FHD IPS touch options. The notebook comes with up to Intel Core i7 processors with vPro, coupled with Intel UHD 620 or Nvidia GeForce MX150 graphics and up to 32GB RAM and up to 1TB SSD. The ThinkPad T480s and ThinkPad T580 have a 15-inch display with options up to FHD IPS with touch support. The ThinkPad T480s has up to 24GB of RAM, 1TB SSD, Intel UHD Graphics 620/Nvidia GeForce MX150. ThinkPad T580 has up to 32GB RAM and up to 2TB HDD/1TB PCIe SSD. All three of them come with Wi-Fi 802.11ac, Bluetooth v4.1, Intel Thunderbolt 3, USB Type-C, USB 3.0, HDMI, headphone and microphone combo jack, and a 4-in-1 microSD card reader.