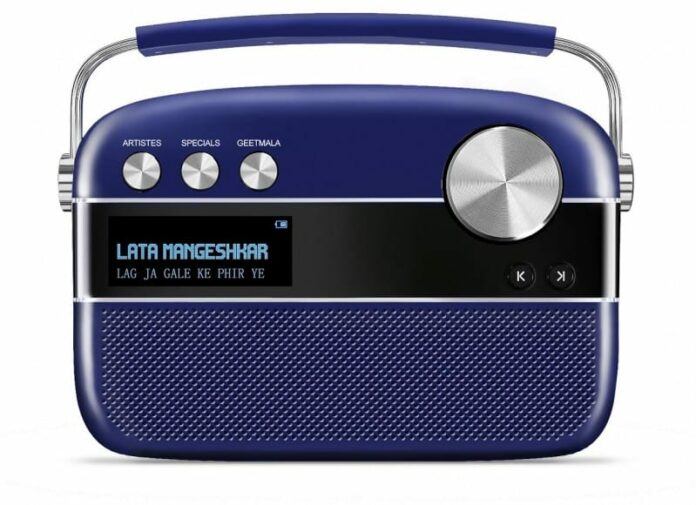 Saregama, the company which had launched Carvaan Mini Bluetooth speaker with preloaded 251 retro songs for INR 2,490 a year ago has now announced a new product in India today. Today, Saregama has announced Carvaan Premium, a portable digital audio player with in-built stereo speakers and 5000 evergreen Hindi songs inside, the company has now released its new Premium Variant in time for the festival season.

All the new features of Carvaan Premium are based on consumer feedback collected over the last few months. The most notable addition is a companion App (Android and iOS) that allows users to choose the song they want to hear or create their own playlist on Carvaan’s premium variant. The other feedback that the company received was to have stations based on heroes and heroines on which the song was picturized. Carvaan’s premium variant now offers 50+ new stations dedicated to artists like Dilip Kumar, Amitabh Bachchan, Sharmila Tagore, Rishi Kapoor etc. This is in addition to the existing 80+ stations dedicated to the singers, lyricists and music composers. Each of the stations can be selected by turning a jog-dial. So literally, with a simple turn of a knob, one can switch from Kishore Kumar classics to Raj Kapoor’s evergreen hits to Mumtaz’s pulsating dance numbers. Carvaan Premium’s music collection also includes the entire Ameen Sayani’s Geetmala countdown collection spanning 50 years. Carvaan Premium now has an additional benefit of AM Radio besides FM Radio. In addition to the USB drive feature, Carvaan Premium comes with Aux-In port allowing one to plug in their portable music devices or laptops or mobile phones. Carvaan Premium works on a rechargeable battery that lasts up to 5 hours.

Carvaan Premium available in a Royal blue color at a price point of INR 7,390.

Vikram Mehra, Managing director of Saregama India says, “We believe that consumer knows the best. Over the last 12 months of Carvaan, we have collected feedback from hundreds of customers. This has been the basis of Carvaan’s Premium variant. We believe Carvaan and its premium variant will be the hottest gifts this Diwali.”