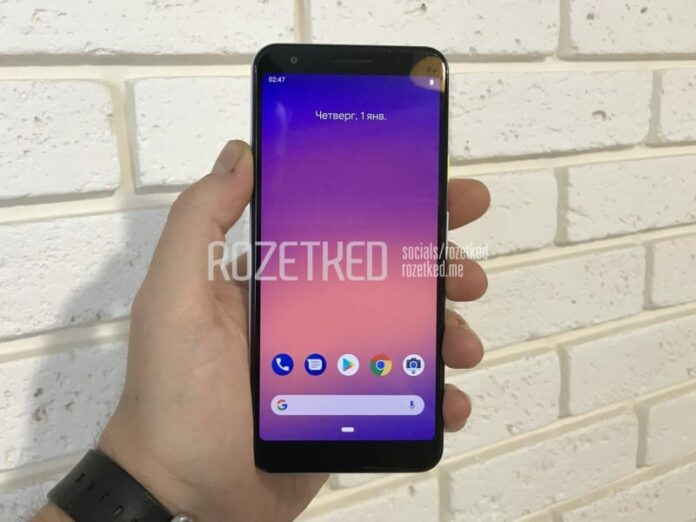 Google’s Pixel 3 and Pixel 3 XL were announced last month and looks like the company is now gearing up for the launch of the “Lite” version. The rumor of Google announcing a budget Pixel smartphone is not new, we have been hearing it for quite a few months now. The Pixel 3 Lite is codenamed Sargo and the same name came out back in October in the ARCore code.

The Lite version, Pixel 3 Lite has surfaced online now and by the leaked images we can see that the smartphone will come with a 3.5mm headphone jack at the top, the feature that is missing from the last gen Pixel smartphone and now in most of the current flagship smartphones like OnePlus 6T. Further, the device will come out with an Octa-core Qualcomm Snapdragon 670 10mm SoC under the hood with Adreno 615 GPU.

As far as specification goes, the display up front is a 5.56-inch IPS-display with a Full-HD+resolution of 2220×1080 pixels. The phone looks pretty much similar to the Pixel 3. The fingerprint scanner is present at the rear and at the bottom is there is a USB Type-C port. At the right, there is are volume rockers and power button. At the top, there is a secondary mic and the 3.5mm headphone jack. It houses a SIM slot at the left of the device.

The device is said to support UFS 2.1 and eMMC 5.1 flash memory and 4GB of RAM and 32GB onboard storage with no micro SD card support. It packs in a 2915mAh with support for Quick Charge 4 and it will come pre-loaded with Android 9.0 Pie. Finally, coming to the camera department, the Pixel 3 Lite is will come out with a 12MP rear camera with dual LED flash and an 8MP front camera and this setup should be similar to what we have seen on the Pixel 3. This smartphone is expected to come out at the end of this year or early next year and the expected price of Pixel 3 Lite is $400-500.