The Unbiased Blog
Home News Tech LG V40 ThinQ launching in India this week, will be an Amazon... 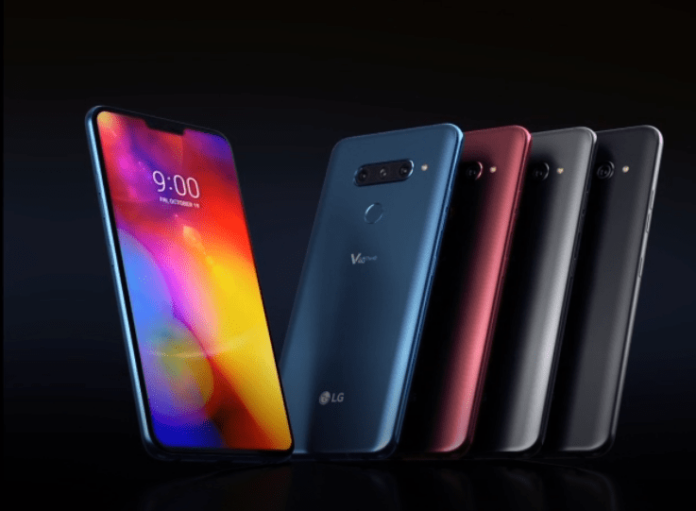 The LG V40 ThinQ comes with a 6.4-inch QHD+ FullVision display(3120 x 1440p) with 19:9.5 aspect ratio. Under the hood, it is powered by an Octa-core Snapdragon 845 processor clocked at 2.8GHz along with Adreno 630 GPU. The device comes with a 6GB RAM, 128GB internal storage with microSD card support up to 2TB. It runs on Android 8.1 Oreo with LG’s proprietary skin- LG UX and the Pie update should be coming out soon. The fingerprint scanner is placed at the rear of the device. It comes with 3,300mAh battery with Qualcomm Quick Charge 3.0, fast wireless charging and USB Power Delivery support. Coming to the camera department, the V40 ThinQ features a triple rear camera – 12MP+16MP+12MP set-up. One of the 12MP(45°) sensor is a telephoto zoom lens, f/2.4 aperture, and the other 12MP(78°) sensor being a primary one with 1.4µm pixel size and f/1.5 aperture. At the center, there is a 16MP(107°) wide angle lens with f/1.9 aperture. The device comes with a dual 5MP+8MP selfie shooters- an 8MP primary sensor with f/1.9 aperture and the secondary 5MP sensor with f/2.2 aperture and 90° wide-angle lens. Some of the camera modes include – Portrait selfie, wide-angle selfie, 2X optic zoom, 107° super wide angle, f/1.5 angle, triple shot(super wide, standard, telephoto) with just single click, cine shot which allows animating a specific area in a photo with a touch motion, and AI portrait mode.

Further, the smartphone is IP68 Water and dust resistant rated and also MIL-STD 810G certified. It houses a 3.5mm audio jack and comes with a 32-bit Advanced Hi-Fi Quad DAC as well as BoomBoxSpeakers as seen on the G7+ ThinQ. It also comes with DTS:X 3D sound. Other features include 4G VoLTE, Wi-Fi 802.11 ac (2.4GHz and 5GHz), Bluetooth 5 LE, GPS, NFC, USB Type-C.