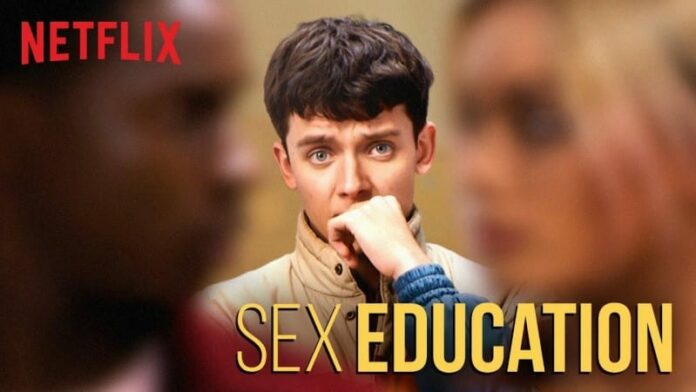 Sex Education stars Otis Milburn (Asa Butterfield) is an inexperienced, socially awkward high school student who lives with his mother, Jean (Gillian Anderson), a sex therapist.  Surrounded by manuals, videos and tediously open conversations about sex, Otis is a reluctant expert on the subject. When his home life is revealed at school, Otis realizes that he can use his specialist knowledge to gain status. He teams up with Maeve (Emma Mackey), a whip-smart bad-girl, and his best friend Eric (Ncuti Gatwa) and together they set up an underground sex therapy clinic to deal with their fellow students’ weird and wonderful problems. Through his analysis of teenage sexuality, Otis realises he may need some therapy of his own 😀

And for good measure – a little pre-reading of Who’s Who before you watch:

Dark hair, blue eyes, sensitive, kind and calm in any situation…every girl’s dream, right? He can even hold his nerve when a fellow student is hanging from a cardboard moon at the school prom…

When it comes to girls, Otis is more armadillo than lion and paralysingly inexperienced. But, knowledge is power, and Otis has a great gift…his mum is a sex therapist and he’s the school’s sexual guru.

Loud, proud and terrible at playing the “trombone”. He may be lame, but he’s got unique style (minus his cycle-helmet). Eric is Otis’s BFF and without him, Otis would be lost.

Don’t let her dark eyes and leather jacket fool you, this girl is whip-smart, business-savvy (yes, the sex clinic was her idea), and has a wicked sense of humour. She may be a school outcast in some student’s eyes, but she’s caught the attention of head-boy Jackson, and fellow sex-clinic business partner, Otis.

Leave a comment or tweet to us if you are excited to watch and learn on the 11th January from this teen Carnal Guru in ‘Sex Education’ only on Netflix.