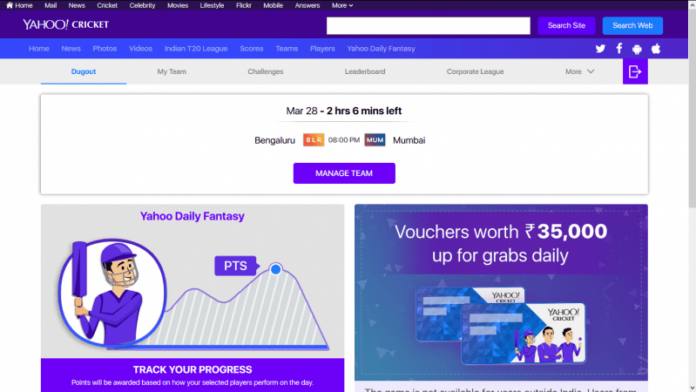 Yahoo Cricket has launched its Daily Fantasy Cricket Game in India that will keep the cricket fans engaged during the IPL 2019 season. As part of the game, users can customize their teams based on daily matches. Alongside bragging rights, winners will receive e-vouchers worth INR 7,500 per game day. The ultimate Yahoo Cricket Daily Fantasy winner stands to win a tournament prize of e-vouchers worth INR 100,000.

Fantasy Cricket has been one of the rapid popularity gaining mode of gaming in India. It is widely acknowledged as a game of skill, where users compete against each other virtually, creating teams with ‘real’ players. Players are awarded points based on the real player’s performance during an actual match. There are currently about 40 million users playing Fantasy Cricket in India, with numbers continuing to rise exponentially. According to industry reports, the fantasy sports market in India is expected to grow to 100 million users by 2020.

Yahoo Cricket Daily Fantasy experience draws from our US counterpart’s proven expertise in fantasy sports. Yahoo Fantasy Sports has been rated as the #1 Rated Fantasy App in the US, known for its ‘player favorite’ features. Cricket fans in India can expect the same winning experience, localized for their favourite sport — Cricket. The game comes loaded with features that create an immersive experience for fans. The Daily Fantasy Cricket also offers a ‘corporate league’ option, amplifying the fun for larger groups.

How many of you are playing fantasy games during IPL? Drop a comment and let us know, follow us on Twitter for more news and updates.