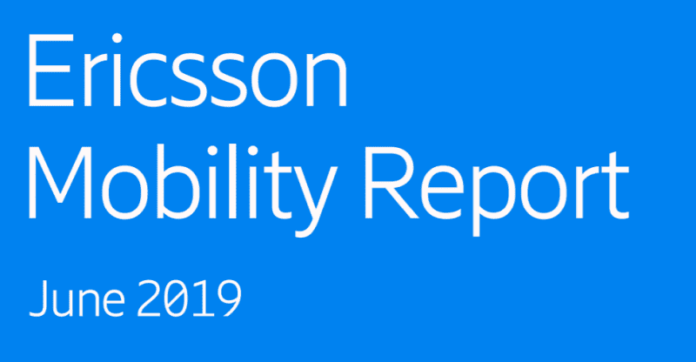 Ericsson today launched the Ericsson Mobility Report, June 2019 edition in India. According to the latest  Report, India region has the highest average usage per smartphone, reaching 9.8GB per month at the end of 2018. Increased numbers of LTE subscriptions, smartphones, attractive and affordable data plans being offered by service providers, and youth’s changing video viewing habits have driven monthly user growth.

The report also predicts that the total mobile data traffic per month in India is expected to increase at a CAGR of 23% from 4.6 exabytes (EB) in 2018 to 16 EB by 2024(almost 4x). The total smartphone subscriptions in the region will reach 1.1 billion by 2024 growing at 11% CAGR, whereas the total mobile broadband subscriptions in India are expected to grow at CAGR of 13% from about 610 million in 2018 to 1.25 billion in 2024. Mobile broadband technologies now make up more than 50% of subscriptions. In India, LTE is forecast to represent 82% of mobile subscriptions by the end of 2024 compared to 38% in 2018. The LTE subscriptions in India are expected to grow at a CAGR of 17% from 450 million in 2018 to 1.16 Billion in 2024. Video will continue to drive data usage and we see monthly data usage per smartphone increasing from 9.8 GB in 2018 to 18 GB by 2024 growing at 11% CAGR. Mobile video traffic is fueling the total data traffic as users are spending more time streaming and sharing video. This is expected to continue, as the video is embedded in all types of online content.

Further, the surveys of smartphone users worldwide indicate that they expect 5G to bring the network performance needed for immersive media formats and applications. Streaming 360-degree video and augmented/virtual reality should start to be a significant factor in mobile traffic growth while enhancing user experience as 5G is rolled out, and compatible devices are successively introduced. The Ericsson 5G Consumer Potential study also reveals that one in five smartphone users’ data usage could reach more than 145 GB per month on a 5G device by 2025.

Other forecasts have also increased notably as a result of the rapid 5G uptake. 5G coverage is forecast to reach 45% of the world’s population by the end of 2024. This could surge to 65%, as spectrum sharing technology enables 5G deployments on LTE frequency bands. The uptake of 5G subscriptions is expected to be fastest in North America, with 63% of anticipated mobile subscriptions in the region being for 5G in 2024. North East Asia follows in second place (47%), and Europe in third (40%).

Total mobile data traffic continued to soar globally in Q1 2019, up 82% year-on-year. It is predicted to reach 131EB per month by the end of 2024, at which time 35% is projected to be over 5G networks. There are 1 billion cellular IoT connections globally, a figure that is expected to rise to 4.1 billion by the end of 2024, of which 45% are represented by Massive IoT. Industries using Massive IoT include utilities with smart metering, healthcare in the form of medical wearables, and transport with tracking sensors.

Ericsson leads the way with the launch of new software and hardware solutions to expand 5G deployment options. The new solutions extend network capacity and coverage, enabling smooth network evolution, and facilitating new consumer and industry use cases. Ericsson is also evolving its cloud solution with an offering optimized for edge computing to meet user demand. This will enable service providers to offer new consumer and enterprise 5G services such as augmented reality and content distribution at low cost, low latency, and high accuracy.