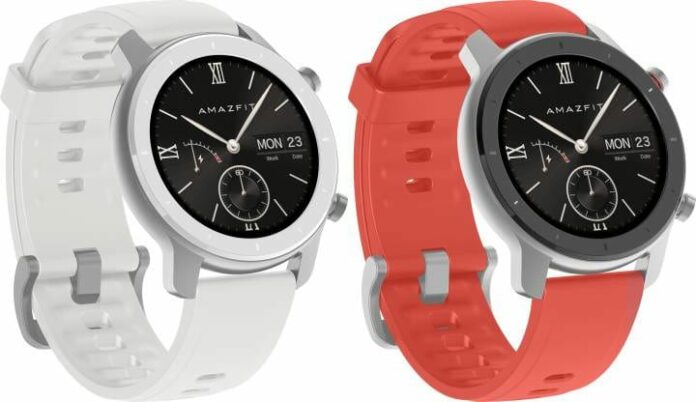 Starting off with the design, the watch dial comes in four variants –  Cherry Blossom Pink, Moonlight White, Starry Black, and Coral Red. It features a dual crown, circular face, metal body, and leather strap. The smartwatch is compatible with both iOS and Android and connects via Bluetooth v5. It is also 5 ATM water-resistant to withstand damage up to a depth of 50 m of water.

Coming to the specifications, the Amazfit GTR 42.6mm  smartwatch features a smaller 1.2-inch AMOLED display with 390 x 390 pixel resolution with Corning Gorilla 3 glass with anti-fingerprint coating, 42.6 mm diameter and weighs only25.5g. Sensors on the Amazfit GTR include – BioTracker PPG, Optical Heart Rate Sensor, 6-axis Acceleration Sensor, 3-axis Geomagnetic Sensor, Air Pressure Sensor, Ambient Light Sensor. On the battery front, the smartwatch offers a battery of up to 12 days on a single charge and it can be charged with the magnetic charger which takes about 2hours from 0-100%.

Functions of the GTR 42.6mm include Stopwatch, Smart Notifications for Calls, Text, Calendar, Weather, Email and Apps notifications, Customizable Watch Faces, Music Control from Wrist. It comes with 12 different sports modes including multiple running modes, cycling, swimming, mountaineering, trail running, and workout. Once the activity is finished, the smartwatch displays all the data collected like distance, pace, bpm range, laps, time per lap, and much more. The watch is suitable even for outdoors as it comes with GPS + GLONASS double positioning that ensures a highly accurate route track.