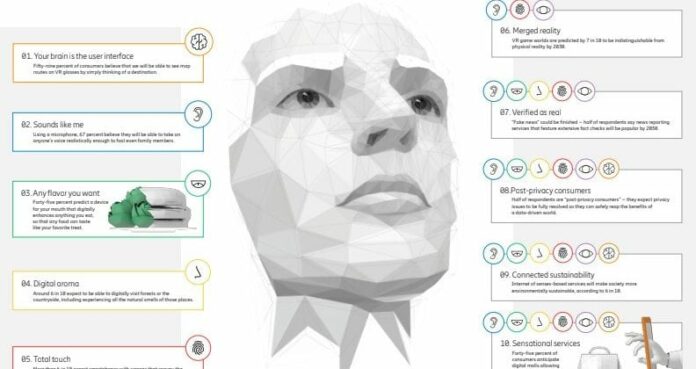 Yes, it’s just the first week of 2020 and we are already discussing the consumer trends of 2030. But as early technology adopter consumers expect an Internet of Senses by 2030, enabling a new service economy based on digital sensory experiences

With the human brain as the user interface, consumers expect devices to respond to thoughts, creating a new interaction paradigm

Consumers expect an array of beneficial services from connected technology interacting with our senses of sight, sound, taste, smell and touch to be a common reality by 2030.  The consumer predictions about the Internet of Senses are among the expectations highlighted in the ninth edition of the Ericsson (NASDAQ: ERIC) ConsumerLab Hot Consumer Trends report.

The Internet of Senses will be enabled by technologies such as Artificial Intelligence (AI), Virtual Reality (VR), Augmented Reality (AR), 5G and automation. Consumers predict that by 2030 screen-based experiences will increasingly compete with multisensory ones that will be almost inseparable from reality.

Based on comprehensive research, the ConsumerLab Hot Consumer Trends 2030 report represents the expectations and predictions of 46 million early technology adopters.

Main drivers for the Internet of Senses include immersive entertainment and online shopping, the climate crisis and the corresponding need to minimize climate impact. 86% of respondents from Delhi said they are open to the idea of an internet of senses and 77% actively want it. 35% of respondents from Delhi want an internet of senses for a better online shopping experience and 30% think it can help fight the climate crisis.

Dr. Pernilla Jonsson, Head of Ericsson Consumer & IndustryLab and co-author of the report, says: “We’re talking about a shift from current smartphone-based internet connectivity to immersive experiences resulting from our senses being connected. This report explores what that could mean for consumers, with Augmented Reality glasses as the entrance point.  We did not expect the extent to which consumers already envisage vast changes to our daily lives driven by sensory connectivity through Artificial Intelligence (AI), Virtual Reality (VR), Augmented Reality (AR), 5G and automation.”

Dr. Michael Björn, Head of Research Agenda, Ericsson Consumer & Industry Lab, and co-author of the report, says: “We often imagine the future as a linear development from today. But we already need to consider what opportunities and challenges a world where all human senses are digitalized will bring.

“For example, it could play a significant role in climate action and carbon footprint reduction. Many activities can be digitalized to reduce their climate impact. You could go to work, go on vacation, and travel the world, all from your home.

“Consumers expect concerns about individual privacy in the Internet of Senses to be addressed by the industry. For example, possible public concern that our senses could be manipulated to purchase items or services. People will expect the necessary protections and guarantees to be put in place.”

Your brain is the user interface

Fifty-nine percent of consumers believe that we will be able to see map routes on Virtual Reality glasses by simply thinking of a destination.

Using a microphone, 67 percent believe they will be able to take on anyone’s voice realistically to fool even family members.

Any flavour you want

Forty-five percent predict a device for your mouth that digitally enhances anything you eat, so that any food can taste like your favourite treat.

Around 6 in 10 expect to be able to digitally visit forests or the countryside, including experiencing all the natural smells of those places.

More than 6 in 10 expect smartphones with screens that convey the shape and texture of the digital icons and buttons they are pressing.

Virtual Reality game worlds are predicted by 7 in 10 to be indistinguishable from physical reality by 2030.

“Fake News” could be finished: half of the respondents say news reporting services that feature extensive fact checks will be popular by 2030.

Half of the respondents are “post-privacy consumers”: they expect privacy issues to be fully resolved so they can safely reap the benefits of a data-driven world.

Internet of senses-based services will make society more environmentally sustainable, according to 6 in 10.

Forty-five percent of consumers anticipate digital malls allowing them to use all five senses when shopping.

So, do let us know which is your favourite trend for 2030 in the comments section below or tweet to us @theunbiasedblog.