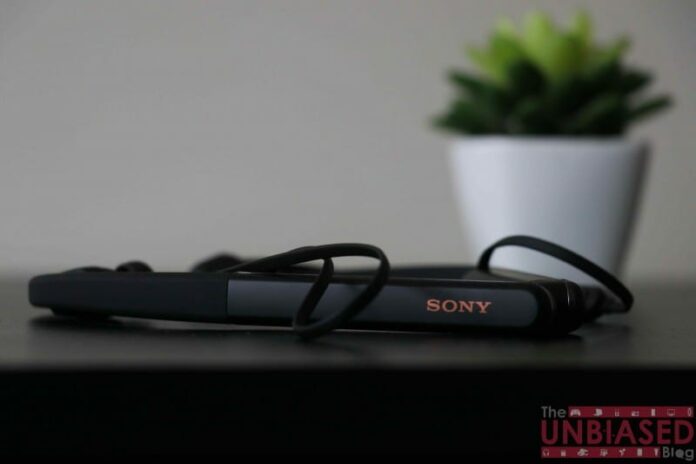 When it comes to getting the best ANC and sound quality out of a pair of headphones, Sony is the only brand that pops up in our minds. Over the years, their MX line of headphones has been setting the benchmarks that others follow.

Now for people who don’t really want a pair of over-the headphones but do want to try out the above mentioned, there are not many options available. For those users, the recent offering from Sony, the WI-1000XM2, which is a neckband style of earphones fits the description. Launched at INR 21,990, these headphones are an upgrade in terms of noise-cancellation tech and are priced on the higher side. Before jumping into the review, let us explore the stuff we get inside the package.

In a sea of neckband-style wireless earphones, the Sony WI-1000XM2 manages to set itself apart in this segment, with its build quality, design and packaging material. They feature a matte black finish, with the Sony logo along with other accents in Rose Gold. This design and color job is in-line with their ANC headphones as well which are priced slightly higher than these.

The earphones are well carved out, with a strong yet flexible neckband. Just like with other neckband style earphones, the ends of the module hold the battery, and the simplified controls take the hassle away. There is just one button on the neckband for power, along with a USB Type-C port (covered by a flap) and a 3.5mm socket to connect a stereo cable for wired listening. The cables for the buds extend from the neckband, with an inline remote on the left cable. The earbuds have the same matte texture and finish as the neckband, and have a microphone on each side for the noise-cancelling functionality. The remote houses the controls for volume and playback, apart from that there is also a customizable button on the remote which can be set to control the noise-cancelling level and ambient sound mode or invoke Google Assistant or Alexa.

Extra ear tips both silicon and foam, USB Type-C charging cable, an airplane adapter and a stereo wired cable can be found in the packaging itself.

Overall, the Sony WI-1000XM2 has a minimal yet practical design that most buyers will appreciate.

When it comes to performance, we feel like Sony has cut no corners. The earphones come with a hybrid dual-driver system featuring a 9mm dynamic driver on either side, which is aided with one balanced armature driver. Like many other flagship audio products from Sony, the WI-1000XM2 utilize the best hardware and software available right now.

These come with Sony’s QN1 noise cancellation processor with dual microphones, along with support for Bluetooth 5, LDAC, AAC, and SBC codecs. The Sony WI-1000XM2 can be controlled using the Sony Headphones Connect app, which is available on both Android and iOS platforms. A lot can be tweaked using the app, more on this later. For a dual-driver setup, the WI-1000XM2 performs really well. During our testing, we tried the earphones with both an Android smartphone and iPhone. In the case of a high-end Android smartphone, you would get the support for LDAC, which is a technology developed by Sony that enables a higher transfer rate between the connected device and earphones, resulting in a near-lossless audio experience.

With the iPhone LDAC or for that matter AptX is missing and instead, you would have to switch to AAC which is our testing was not that far behind in terms of audio quality. The earphone had a punchier bass with crystal clear details. Since the sound stage was rich, tracks with finer and fainter details could be heard clearly. In certain tracks, the audio felt spatial with excellent instrument separation, something we were really looking forward to, considering their price.

Besides an impressive sound output, the Sony WI-1000XM2 also has equally impressive noise cancellation. The buds are slightly angled and with the right ear tip, they form an excellent grip, thus resulting in extremely good noise cancellation. One thing to note here is, when comparing the ANC levels to their bigger counterparts the Sony WH-1000XM3, the output might differ and this is to be expected. Coming back again to the Sony Headphones Connect app, there is an ambient sound control, which allows you to customize noise-cancellation intensity. Using the app, you can either set the earphones to isolate outside noise completely or to focus only on voices from surroundings. There is also an adaptive sound-control mode in the app that detects your actions and movements to automatically control the ambient sound.

Moving to battery life, during our tests the earphones lasted a little over 8 hours with the claimed backup of 10 hours. The battery life did vary, depending on ANC, volume levels, etc. They do come with fast charging tech baked into them, which meant that with just 10 minutes of charge you could get about 60 minutes of listening time. With a price tag of INR 21,990, the Sony WI-1000XM2’s are perhaps a bit too expensive when looking at their form-factor and type. That being said, they did impress us, with their excellent and well-rounded sound stage, and the Active Noise Cancellation. They are ideal for people looking for a pair of wireless earphones with good quality sound and ANC, for people that don’t care about ANC, you are better off buying WI-C600 or C400.