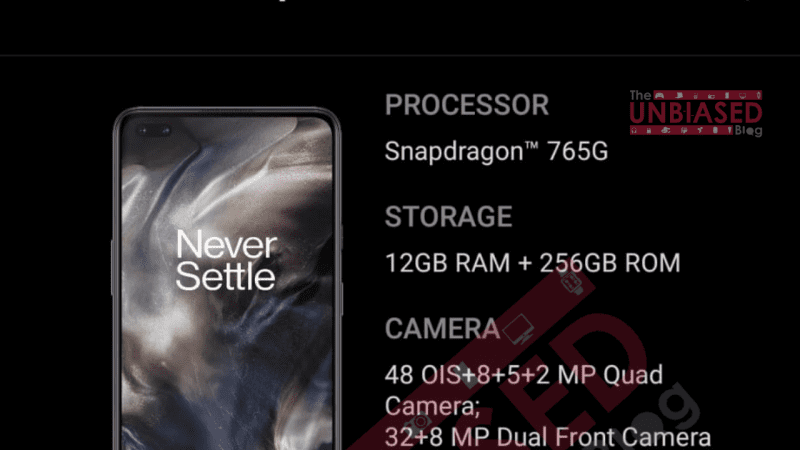 OnePlus Nord has gained a lot of hype in the past couple of days all thanks to OnePlus’ marketing team and now just a few hours ahead of the debut of the OnePlus Nord, The Unbiased Blog has learnt from a reputed source about the key specifications of the smartphone alongside the pricing for the 12GB RAM variant. To recall, a recent report which was obtained from OnePlus’s Instagram handle confirmed the usage of Google’s Stock Phone and Messaging application on the device.

We have received a few screenshots taken directly on the device comprising of information about the specifications of the device and confirming the previous reports of the usage of the Google Stock applications. As per the screenshot of the Device info page from the OnePlus Nord, the machine sports a 6.44-inch 90Hz Fluid AMOLED Display, a quad rear camera setup on the back comprising of a primary 48-megapixel sensor, an 8-megapixel, a 5-megapixel and a 2-megapixel sensor on the rear, while there is no official info on the type of the sensor we do expect it to be a primary, ultra-wide, macro and a depth sensor.

On the front, the OnePlus Nord will have a pill-shaped dual punch hole on the front housing a primary 32-megapixel shooter along with an 8-megapixel ultra-wide angled lens. Under the hood, the Nord will be powered by the Qualcomm Snapdragon 765G Chipset which would be coupled with up to 12GB of RAM and 256GB of Internal Storage.

For the pricing, while we do not have complete info on the variants and their pricing, our source claims that the OnePlus Nord will be available in three RAM variants 6/8/12GB. The 12GB+256GB variant has been reported priced at Rs.24,999 (~ 330 USD) in India. Additionally, the Nord runs on OxygenOS based on Android 10 out of the box.

What do you guys think about the pricing of the OnePlus Nord?do let us know by dropping a comment in the comments section below or tweet to us @theunbiasedblog