Paytm waives off Charges on merchant transactions, Will Fund MDR of Rs. 600 crore for MSMEs 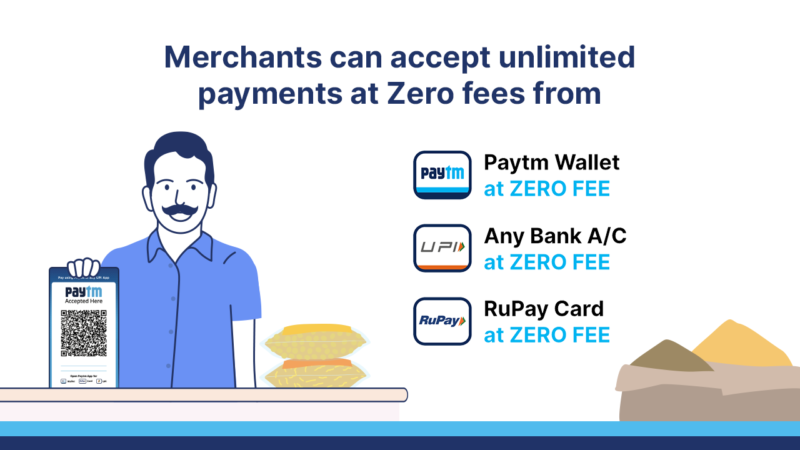 Paytm, one of India’s leading digital financial services platforms has announced a waiver of all charges on merchant transactions. The company is now taking the payments revolution to the next level by enabling the merchant partners to accept payments from Paytm wallet, UPI apps, and RuPay cards at Zero charges. Additionally, Paytm will absorb Rs 600 crore in MDR charged annually by banks and other charges to support MSMEs during the ongoing pandemic.

This action will benefit more than 17 million merchants on the Paytm ecosystem who use Paytm All-in-One QR, Paytm Soundbox, and Paytm All-in-One Android POS to accept payments from their customers. Merchants will also have the power to choose whether they want to receive payments directly into their bank accounts or into their Paytm wallet. The company has been promoting acceptance of payments through all methods including Paytm Wallet, UPI, Rupay, NEFT & RTGS among others and empowers merchants to accept unlimited payments Paytm All-in-One QR at zero charges.

Kumar Aditya, Sr. Vice President – Paytm said, “We are absorbing MDR to extend support to our merchant partners to increase their overall liquidity to expand their businesses. We believe waiving off these charges will benefit all MSMEs accepting Paytm All-in-One QR, Paytm Soundbox, and Paytm All-in-One Android POS devices to collect payments directly into their bank accounts. Paytm All-in-One QR has always been the best mode for merchants to accept digital payments as it accepts unlimited payments at zero cost from any UPI app and Rupay Cards, now with Paytm Wallet too. This move would also encourage merchants to embrace digital payments which would further strengthen the Digital India mission”

Paytm will also be extending their financial support to MSMEs & aiming to disburse Rs. 1000 crore in loans by Mar’21. The company continues to offer collateral-free loans under the ‘Merchant Lending Program’ in the Paytm for Business app. Its algorithm determines the credit-worthiness of the merchant based on daily transactions and arrives at a pre-qualified loan offering. It has digitized the entire process starting from the loan application, approval to disbursal with no additional documents required in partnership with NBFCs and banks.