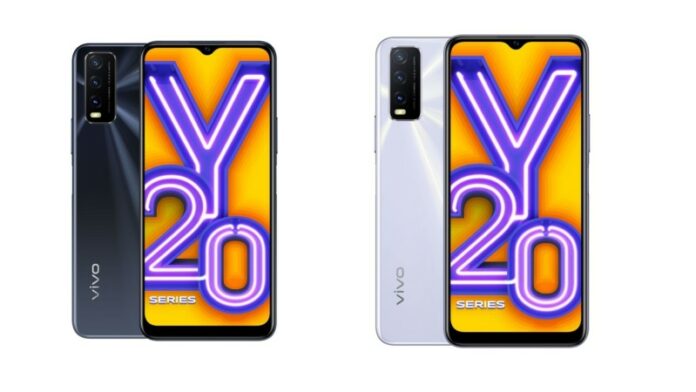 Soon after the silent launch of the Vivo V20 2021, the company has now announced the arrival of the Vivo Y20A in India. The smartphone features a giant 5,000mAh battery, runs off a Snapdragon 439 SoC has a 6.51-inch display with a waterdrop-style notch display with Android 11 based FunTouch OS 11

The Vivo Y20A sports a 6.51-inch HD+ (720×1,600 pixels) IPS LCD panel, is under the hood powered by the Snapdragon 439 SoC coupled with 3GB RAM and 64GB of internal storage which can be further expanded using a dedicated microSD card slot.

The phone runs off a 5,000mAh battery which comes with support for 10W fast charging; the brand claims that the phone can last for more than 17 hours with HD movie streaming and more than 10 hours of gaming. Additionally, the smartphone has a side-mounted fingerprint scanner, features Bluetooth 4.2, a Micro-USB port, GPS, FM Radio, and more. The phone runs on Android 11-based FunTouch OS 11.

The Vivo Y20A has been priced at Rs. 11,490 in India for single variant comprising of 3GB of RAM+ 64GB of storage. As of now, the smartphone will be sold in two colour options namely Nebula Blue and Dawn White. The Y20A will be sold across mainline partner retail stores, Vivo India’s official online store, and a couple of other major e-commerce websites starting from January 2.

That said, what do you think of this newly arrived Vivo smartphone? Do let us know by dropping a comment down below.