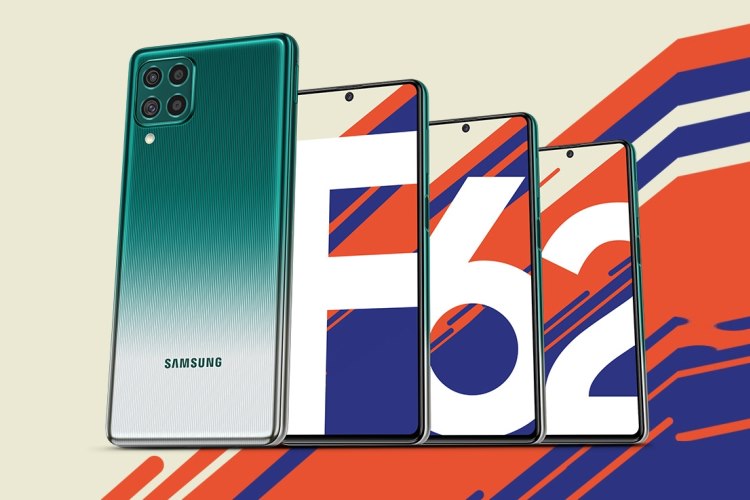 Samsung has launched the Samsung Galaxy F62 in India. It arrives with a big 7000mAh battery and even a 7nm Exynos SoC.

This device sports a 6.7-inch Full-HD+ Super AMOLED display. The bezels are very minimal and the resolution is 2400 x 1080-pixels. More for the display, it gets a centered punch-hole cutout with a 32MP selfie camera on the front. Also, there is a side-mounted fingerprint sensor that can double up as the power button as well.

As far as performance is concerned, Samsung Galaxy F62 ships with a flagship Exynos 9825 SoC processor which is based on the 7nm process, this chip also came with the Galaxy Note 10 series in 2019. This chip assures that, the phone will have no problems what-so-ever to compete against the Mediatek chips. It gets one RAM and Storage variant, that is the 8GB+128GB of storage variant. Also, there is support for expandable storage, up to 1TB via the dedicated microSD card. The software of this phone is running on Android 11-based OneUI out-of-the-box.

The optics of this phone are one of the crucial points. It boasts a square camera system that looks very familiar to one of the Pixel 4a and the iPhones as well. There is a quad-camera system at the back of the phone, with the main sensor 64-megapixel primary camera. The other 3 cameras are a 12-megapixel ultra-wide lens, and a 5-megapixel macro, and a 5-megapixel depth sensor as well. An LED flash is also existing which sits outside on the bottom edge of the camera module.

Another highlight of its phone is the huge 7,000mAh battery that is present in this phone. Overall with the 25W fast-charging also in the box, it feels like a complete package. Last but not the least, entering to the connectivity of the phone, it gets a USB Type-C port at the bottom, with a 3.5mm audio jack as well. It also supports Bluetooth 5.0, with Wi-Fi 802.11ac, but unfortunately, this is a 4G device only. That means it does not have 5G networks. This could be a bummer for some people, as phones like the Mi 10i, Realme X7, and OnePlus Nord support 5G networks at this price as well.

Moving onto the price, the Galaxy F62 will be available in two variants the 6GB+128GB and 8GB+128GB. The 6GB+128GB base variant is priced at Rs. 23,999 whereas the 8GB+128GB variant will be priced at Rs. 25,999. It is available in three color variants, named Laser Green, Laser Blue, and Laser Grey. It will go on sale starting from 2nd February via Samsung Shop, Flipkart, and popular offline retail stores.

Well with that said, do let us know your opinions on the Samsung Galaxy F62, by dropping a comment down below.