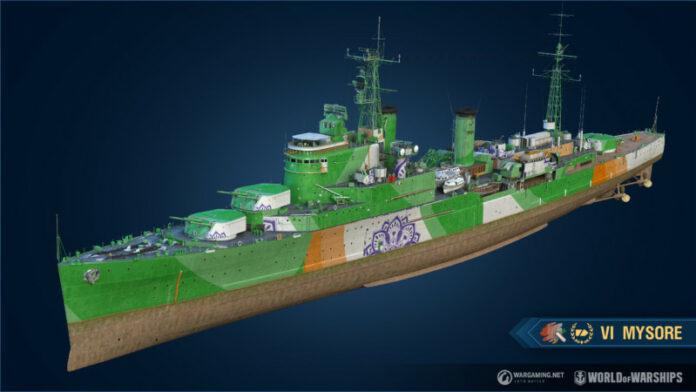 World of Warship has introduced a new Indian Navy Ship in the game, called the INS Mysore. It is an award-winning game, and now finally it has finally got an Indian Navy ship as well.

Speaking on the launch of INS Mysore, Mr.Rajeev Girdhar, European Publishing Director for World of Warships and India Operations Lead,  said, “We are thrilled to finally introduce the INS Mysore for our players in India and across the world. Ever since our India launch we’ve been working closely with our partners to engage with our ever-growing Indian player base and provide them with unique themed content like Tri-Color camouflages in-game! India’s growth into a naval superpower of the modern age and the exponentially growing appetite for immersive gaming in the country has led us to build and develop a whole new range of exciting content that augments the already exceptional gaming experience.”

Talking more about the actual ship now, the INS Mysore was a Fiji-class cruiser commissioned to the Indian Navy in 1957. It was acquired from the Royal Navy, where it served in World War II as HMS Nigeria. INS Mysore was the second cruiser to be purchased by independent India. It served as the flagship for the western fleet during its service and was also the command ship for the raid on Karachi Harbor in 1971.

Since its launch in 2015, the game has added over 38 million players on the back of its focus on history, military, and engineering enthusiasts, making it one of the most successful games in this genre on the planet. The game can be downloaded for free from the link mentioned below-

Well with that said, do let us know if you have any questions or queries by dropping a comment down below.