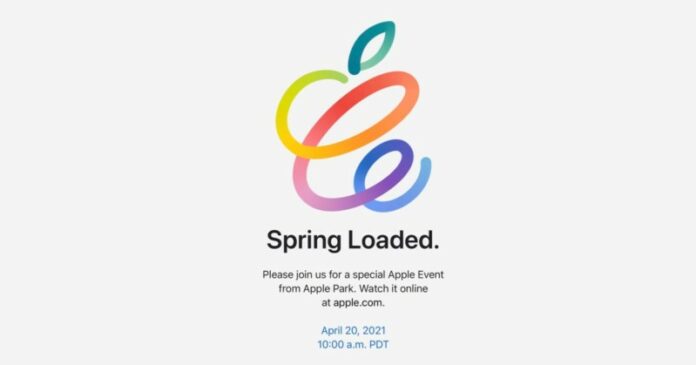 Apple has announced a lot of stuff in this year’s first Apple Event. They have announced a new Purple colour for the existing iPhone 12 and 12 mini, much-awaited AirTag, a new Apple TV 4K that comes with a new Siri Remote, a new 24″ iMac, and lastly the new iPad Pro series. But that’s not it, Apple also announced the update for its Podcasts app and Apple Podcast subscription. So, here’s everything Apple announced at its Spring Loaded event. 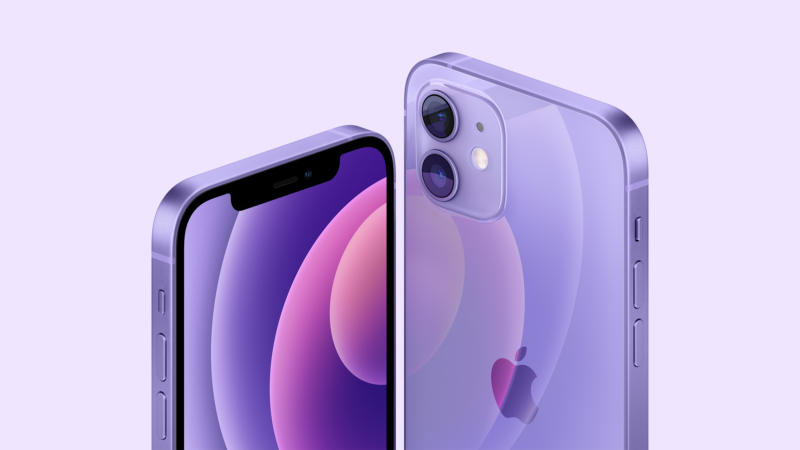 Customers can also get their iPhone with a new MagSafe Leather Case or Leather Sleeve in Deep Violet, a Silicone Case in Capri Blue, Pistachio, Cantaloupe, or Amethyst, or a Leather Wallet in Arizona, all available to order beginning today. 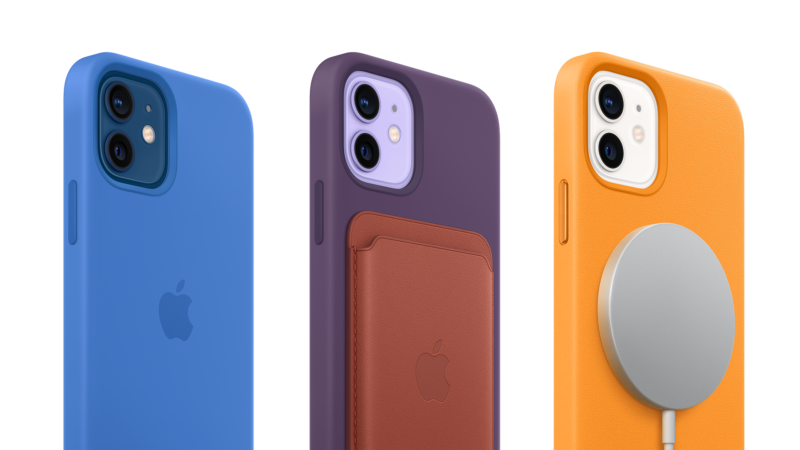 The much-awaited and rumoured personal tracker – Apple AirTag has finally launched. For those of you who don’t know, AirTag is an iPhone accessory that provides a private and secure way to easily locate items. It would be available beginning from Friday, April 30. The AirTag features a small and lightweight design. It features precision-etched polished stainless steel and is IP67 too. That means, it is water and dust-resistant.

There is a built-in speaker that plays sounds to help locate AirTag, while a removable cover makes it easy for users to replace the battery. It also features the same setup experience as we get with the AirPods and the AirPods Pro. Users would just need to bring their AirTags closer to their iPhones and it will connect. The AirTags can be assigned to an item and name it with a default like “Keys” or “Jacket,” or provide a custom name of their choosing.

Apple also gives the option for personalizing their AirTag with free engraving, including text and a selection of 31 emoji. Users just need to select the option when purchasing they are purchasing it from Apple’s official website. According to Apple, the AirTag is meant for using it with Keys and other small items. It includes the Polyurethane Loop, which is both lightweight and durable, and the Leather Loop and Leather Key Ring. It also features tanned European leather too.

Apple TV 4K with A12 Bionic

Now to some entertainment with the new Apple TV 4K that now comes with the A12 Bionic chip. According to Apple, the new “Apple TV 4K works seamlessly with Apple devices and services to magically transform the living room in ways that everyone in the family will love.” 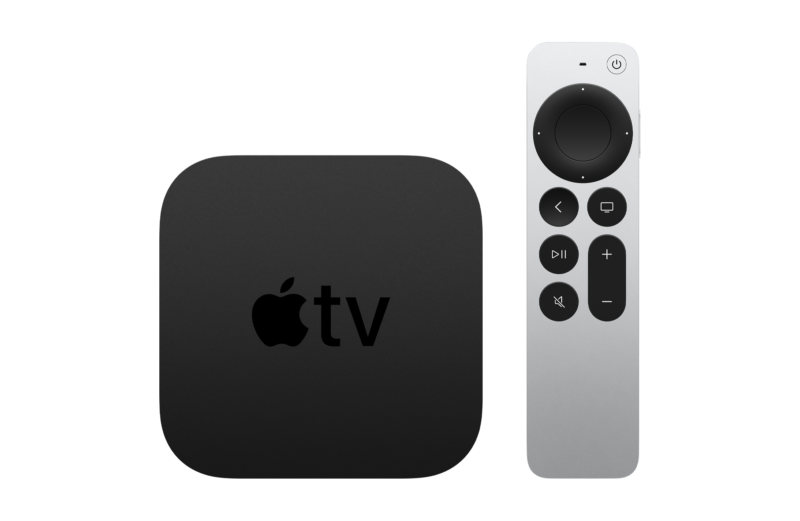 With the addition of the A12 Bionic chip, the Apple TV 4k now also supports high frame rate HDR and Dolby Vision video. This would be enabling the playback of videos in 60 frames per second in HDR now. Apple says that they are also working with leading video providers around the world. The list includes FOX Sports, NBCUniversal, Paramount+, Red Bull TV, and Canal+ as they are beginning to stream in high frame rate HDR. This also means that the Apple TV will now support high frame rate support in AirPlay, with the iPhone 12 series of phones. So users can display the videos in full 60-fps Dolby Vision on the Apple TV 4k now. 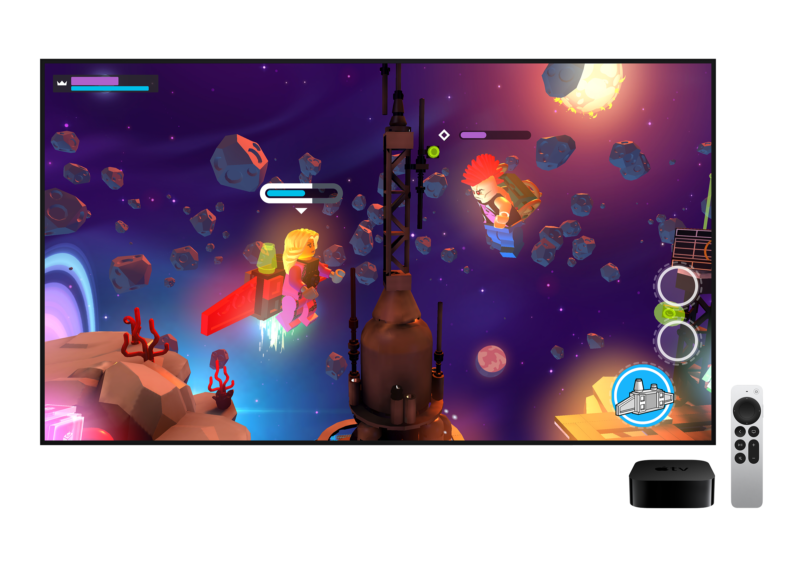 Apple has also added a new feature, that would allow Apple TV to work with iPhone and its sensors to improve a television’s picture quality. Apple TV uses the light sensor in iPhone to compare the colour balance to the industry-standard specifications used by cinematographers worldwide. Using this data, Apple TV automatically balances its video output to deliver much more accurate colours and improved contrast. This would help in even better colour calibration and that too without the users even having to adjust their television settings.

As for the new Apple TV remote, it features an innovative clickpad control that according to the maker, “offers five-way navigation for better accuracy, and is also touch-enabled for the fast directional swipes Apple TV users love.” The outer ring of the clickpad now supports a circular gesture that would turn for controls.

It also has a power button that controls the TV’s power, there is another button for mute too. They have also given a Siri button by which users can search for specific shows or movies, control smart home accessories, check sports scores or the weather, and much more. 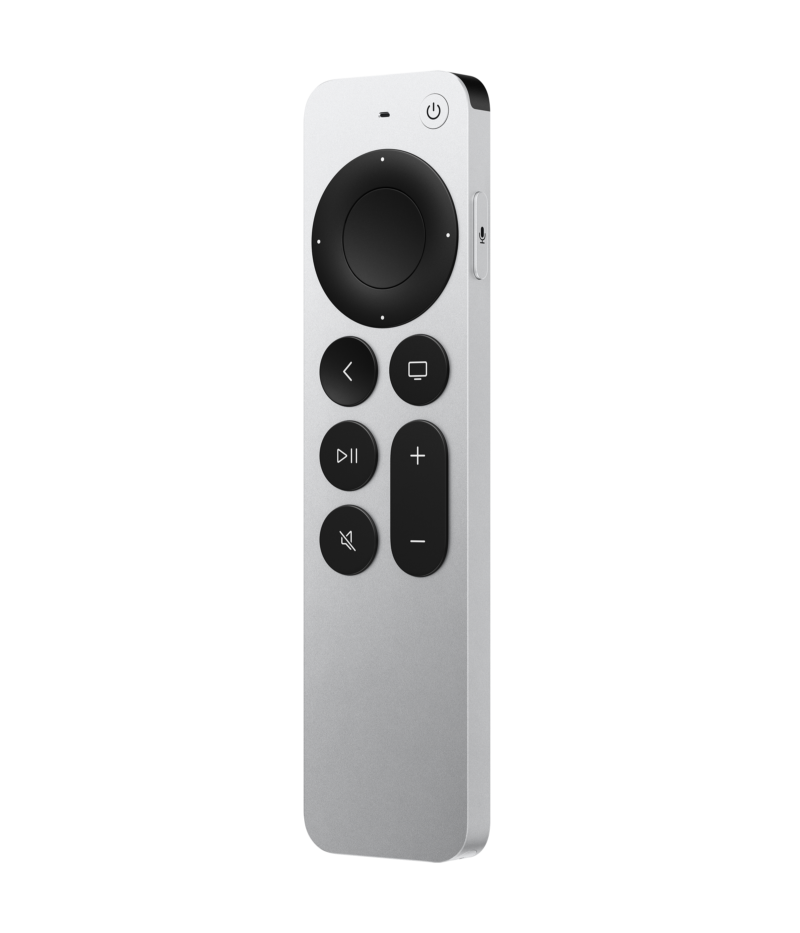 We all were waiting for the iMac line of desktops to come with Apple Silicon aka M1 SoC. The previous iMacs came were powered by Intel processors and were not updated to the Apple Silicon. So, Apple has now launched the new iMacs with refreshing new design, colours and of course the M1 SoC. 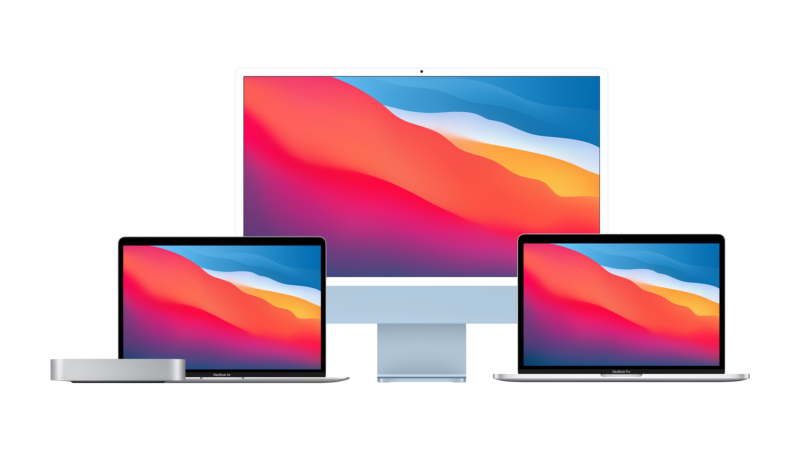 This new iMac offers powerful performance and is just 11.5 millimetres thin. It is now available in a lot of vibrant colours and features a 24-inch 4.5K Retina display. There are over 11.3 million pixels, 500 nits of brightness, and over a billion colours, that according to Apple, would be “delivering a brilliant and vivid viewing experience.” 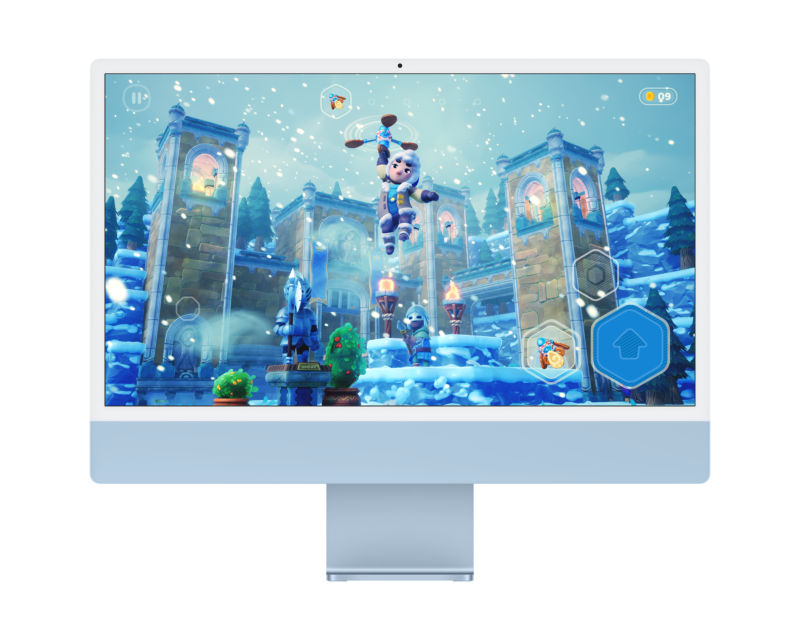 As for the design, it features a thinner and more compact design when compared to the previous generation iMac. The much more compact design reduces the volume of iMac by 50 percent, 1 allowing it to take up less space and fit easily in even more places.

It is available in a lot of colours, that include green, yellow, orange, pink, purple, blue, and silver too. The new iMac features softer colours and thinner borders on the front to allow users to focus on their content. It now comes with a new power connector that attaches magnetically and a beautifully woven 2-meter-long colours-matched cable too.

Magnetic Power Cable and power supply with color matching braided cable. And the Ethernet port connects through the power adapter. 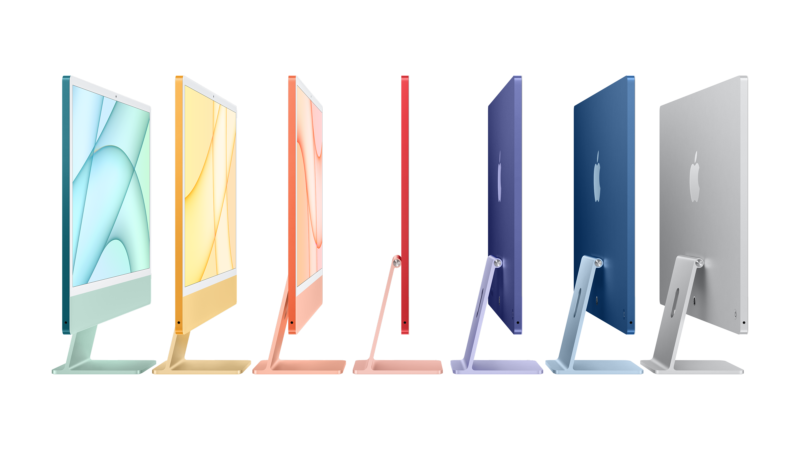 It now includes a 1080p FaceTime HD camera, studio-quality mics, and a six-speaker sound system. According to Apple, it is the best camera and audio ever in a Mac. There is also the addition of Touch ID that comes to iMac for the first time. This can be used for securely log in, making purchases with Apple Pay, or even switch user profiles with just the touch of a finger. It would be available for pre-order from Friday, April 30. Whereas, will be available for purchase in the second half of May. 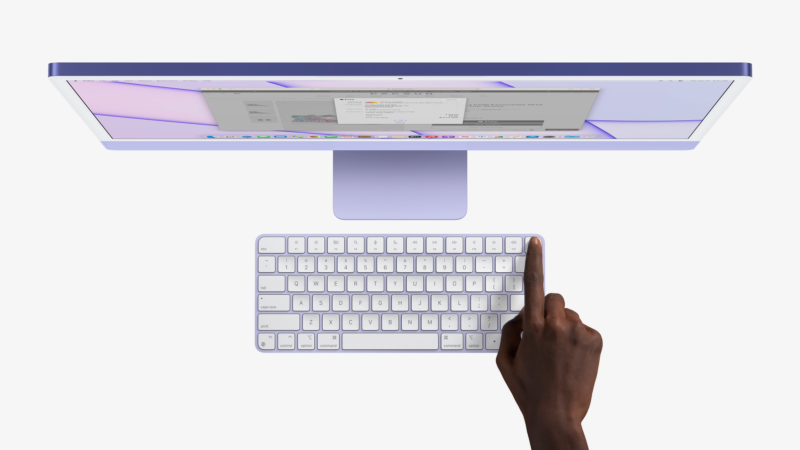 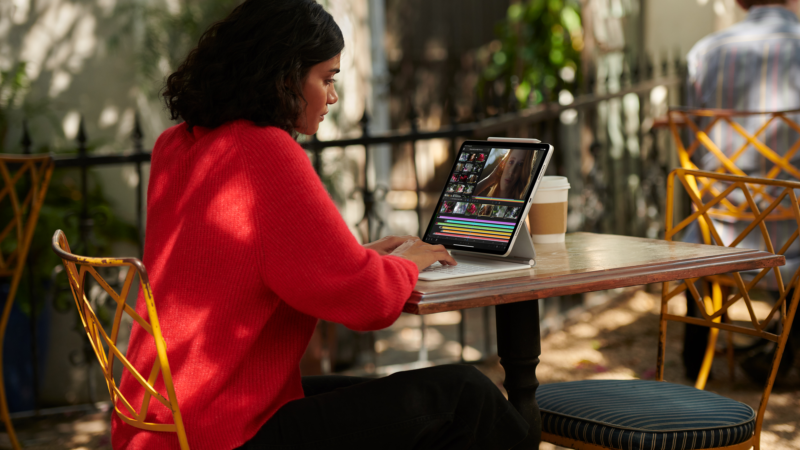 The 12.9-inch iPad Pro features a new Liquid Retina XDR display that according to Apple, “brings extreme dynamic range to iPad Pro, offering a stunning visual experience with more true-to-life details to the most demanding HDR workflows.” This time, the Cellular models also come with 5G that would help deliver even faster wireless connectivity. This new iPad Pro also supports a Thunderbolt Port that means the range of accessories is even wider. 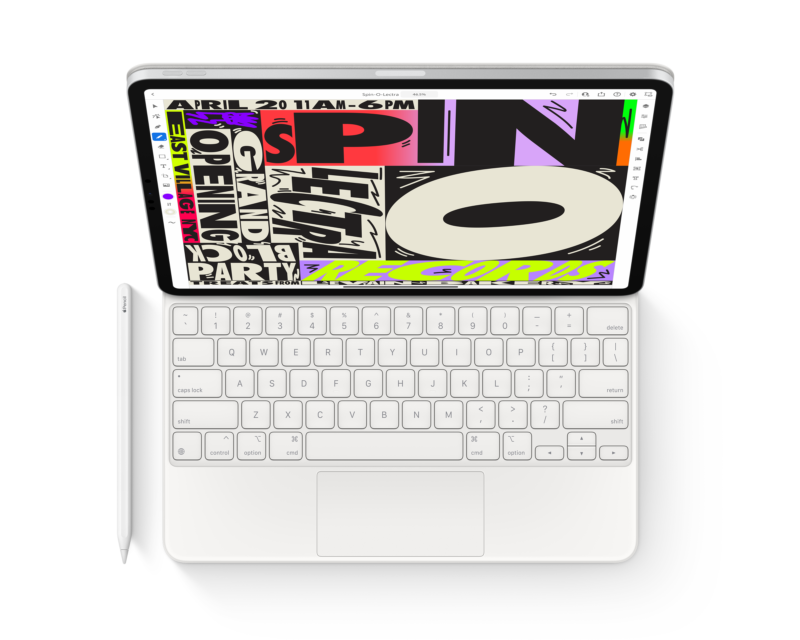 Additionally, the new iPad Pro also supports an Ultra Wide front camera that would enable Center Stage. It is a new feature that automatically keeps users perfectly framed for even more engaging video calls. This new iPad Pro would be available to order from Friday, April 30, on Apple’s official site, and will be available in the second half of May.

The Magic Keyboard is also supported, which means users can get a comfortable typing experience with backlit keys, an integrated trackpad too. Now it comes in a new white colour too. It runs on iPadOS 14.5, and with Apple Pencil would support features like Scribble and Smart Selection. There are new emoji added and also it supports the latest gaming controllers. The PS5 and XBOX controllers are supported with support for advanced haptics too. 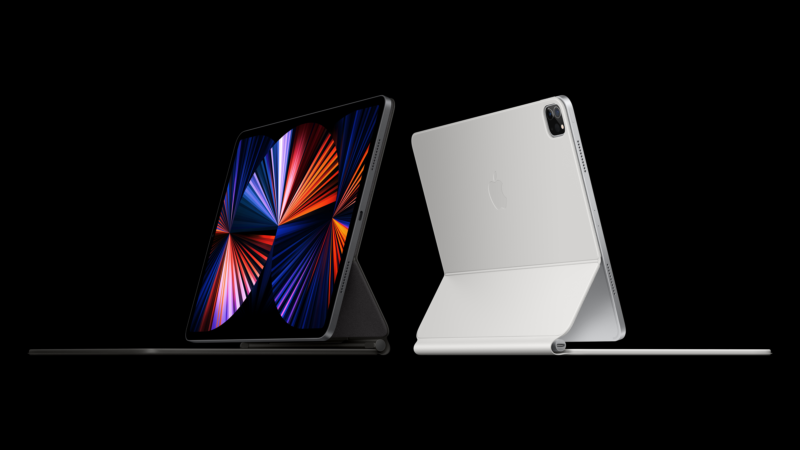 Honestly, most people expected the Spring Loaded event to be more of announcements about Software and Apps. But it turned out to be one of the biggest hardware announcement for an Apple event. Nevertheless, Apple did make the announcement about its Podcasts app and platform.

Starting in May, listeners in more than 170 countries and regions can sign up for premium subscriptions that include a variety of benefits curated by creators, such as ad-free listening, access to additional content, and early or exclusive access to new series. Listeners will be able to enjoy premium subscriptions from independent voices and premier studios, including Tenderfoot TV, Pushkin Industries, Radiotopia from PRX, and QCODE, to leading media and entertainment brands, including NPR, the Los Angeles Times, The Athletic, Sony Music Entertainment, and many more.

With iOS 14.5, listeners can access a redesigned Apple Podcasts app featuring an enhanced Search tab that provides quick access to Top Charts and categories. Apple Podcasts also features beautiful new pages for every show and episode to make it easier to follow, listen, and share. The new Smart Play button helps listeners automatically start episodic shows from the latest episode and serialised shows from the beginning of each series. Listeners can also now save individual episodes, which are downloaded for offline playback, making it easy to bookmark podcasts to listen to later from Library.

As for the pricing of these new products, the new Purple Colour iPhone 12 and 12 Mini would be available at the same price for which they are currently available. Buyers can just select the purple colour option and it would be available for purchase without paying anything extra. 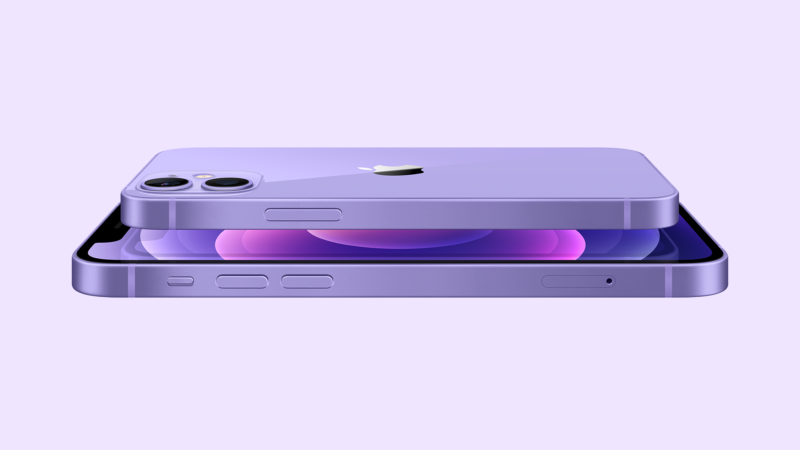 For the AirTags, they will be available in one and four packs for INR 3190 and INR 10900, respectively. Users can get it from Apple’s official website or either through Apple Authorised Resellers beginning Friday, April 30. There is also a Leather Key Ring in Saddle Brown, (PRODUCT) RED, and Baltic Blue for INR 3590 the Leather Loop in Saddle Brown, and (PRODUCT)RED for INR 3990. Along with this, buyers can get add personalized engraving for free (Only available through Apple’s official website). 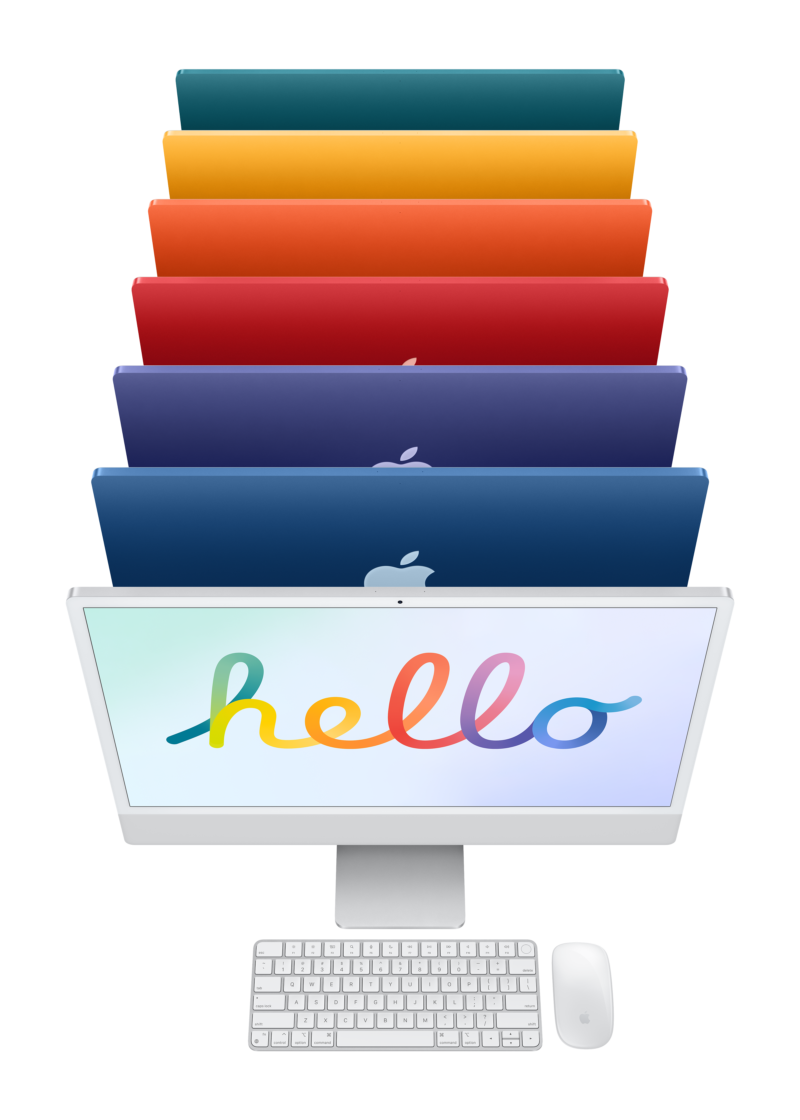 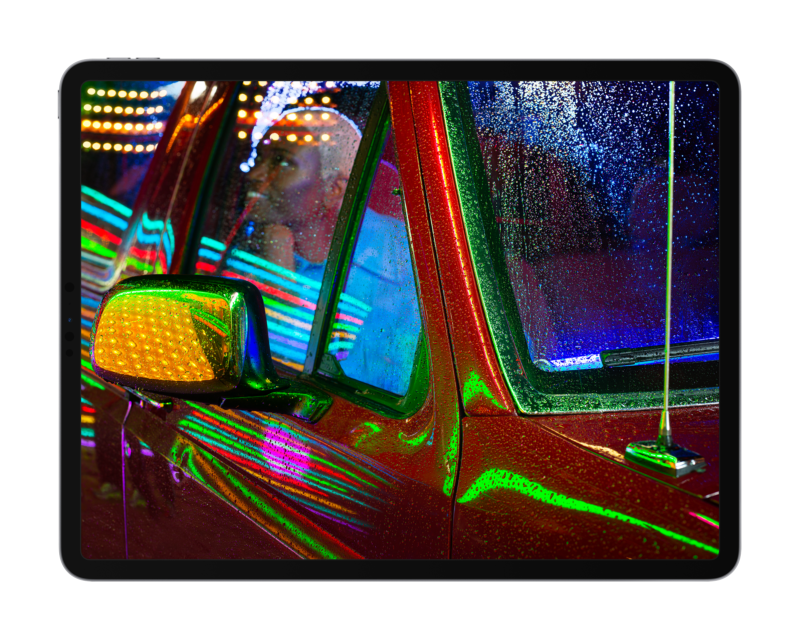 Well with that said, do let us know your opinions on this post Here’s everything Apple announced at its Spring Loaded event #AppleEvent by dropping a comment down below.