The Unbiased Blog
Home News Tech Micromax In 1 – The Unbiased Review: A great buy at ₹9999/- 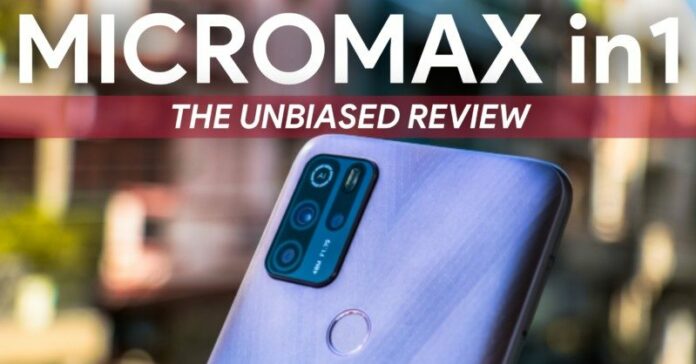 Micromax has had a strange journey from being a well-known offline-centric brand to vanishing for almost two years from the smartphone space. Now, Micromax is hitting back the shores of the Indian market to make its comeback. On 3rd November 2020, they introduced two new smartphones in its portfolio:- In 1b and In Note 1 with its new ‘Make in India’ initiative. Now, Micromax announced their third smartphone in its portfolio i.e, Micromax In 1 which makes its space in between the In-series. This smartphone targets the budget smartphone category which starts at Rs.9999. With a lot of contenders out there, Micromax had to nail the price and that’s what they did with the Micromax In 1. After using this device as my primary driver for almost 30 days, Here’s my review of the Micromax In 1.

Before moving onto the actual review of the phone, the technical specifications have been mentioned below for a better overview- 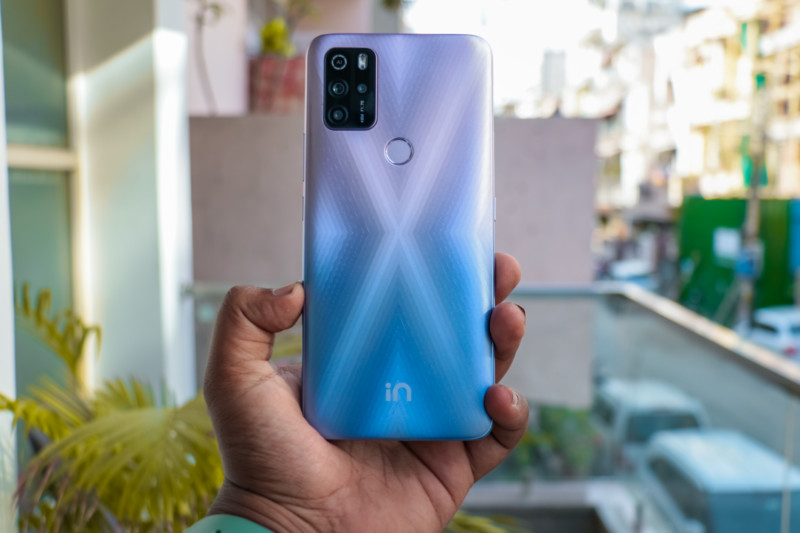 The Micromax In 1 holds a high-quality polycarbonate with a flashy gradient-Esque rear panel, and has an X shaped pattern that shimmers when light reflects on it. It also has an oleophobic coating which resists smudges and fingerprint traces. On the bottom, there is a subtle ‘in’ branding which reminds me of the ‘Linkedin’ logo and a triple camera setup on the top left side. Meanwhile, every brand is now shifting its fingerprint scanner built into the power button, Micromax still has it on its rear and it performs mediocre. The device comes in two colour variants:- Blue and Purple. In our review period of this device, we got the Purple variant. 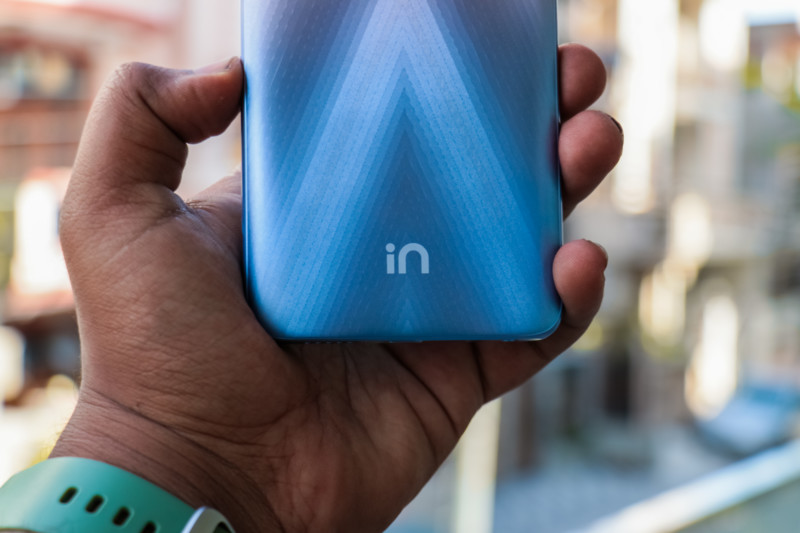 Weighing at 195 grams, it isn’t the lightest competitor out there. It feels bulky and thick while operating the device. Packing in a 5000 mAh battery it’s bulkier than other devices with similar battery capacity. However, there were no rear panel creaks noticed as they’ve improved their build quality from the past iteration. The plastic back doesn’t feel sturdy but that’s a norm in this price bracket. But we do have to point out that peeling the IMEI sticker, the adhesive was stuck to the phone’s back and took a lot of effort to come off.

Elsewhere, the port layout is as standard as it comes on a budget segment device. On the bottom, it houses a Type-C Port along with a headphone jack and noise cancellation mic on its left and a mono speaker equipped on the right of it. Its competitors offer a dual stereo speaker, this mono speaker is decent and loud enough to get your job done but doesn’t have much bass to speak off. 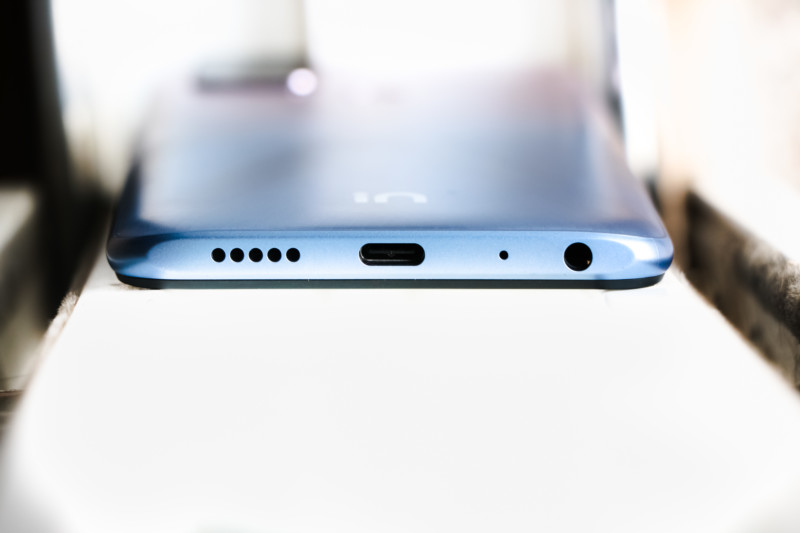 On its right, it houses the power button and volume rockers and on the left, it has a google assistant hotkey and the SIM Tray Slot. The placement of the buttons are easy to reach with one-hand operations and it delivers tactile feedback. This Sim Tray slot can house 2 Nano SIM card slots and an expandable memory card slot which supports the expansion of up to 256GB. On the top, there’s a secondary microphone. The fingerprint sensor on the back is snappy and quick whereas the face unlock almost takes 2-3 seconds to unlock the device.

Switching to the front, it has a 6.67inch FHD+ IPS LCD Display with 440 nits of brightness and 60hz of Refresh Rate. With its competitors like Motorola G30 and Redmi Note 10, the static 60hz is lackluster but it competes with Redmi 9 Power and Poco M3 which delivers the same display as In Note does. 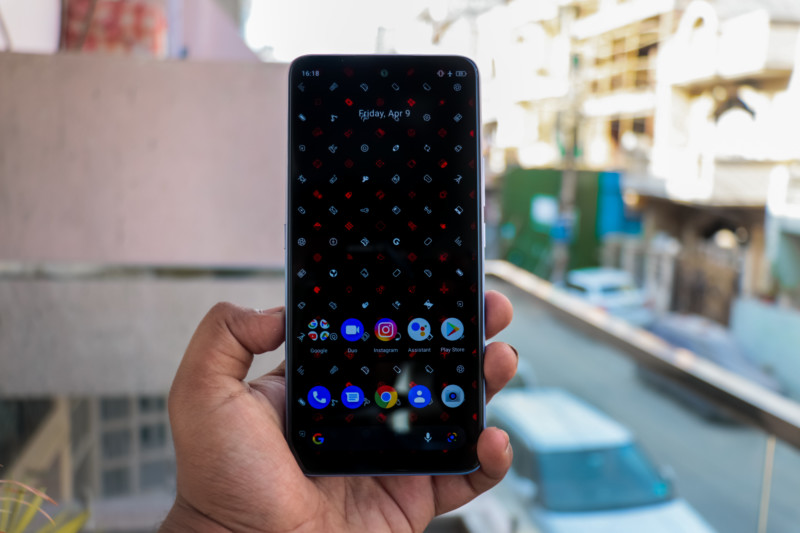 The display panel holds a resolution of up to 2400 x 1080 pixels with a punch-hole selfie cutout on the top. The viewing angles are good under direct sunlight and colours look suitably punchy. The default tuning tunes vivid colours which aren’t accurate but can be tuned under settings with three tuning modes:- Standard, Vivid, Cool Color and else you can customise the display to your taste. Black levels aren’t quite good in the dark mode, it ends up looking grey which doesn’t interrupt the experience. It has the support for Widevine L1 Certification which is an addition to your binge-watching experience in HD. In the Disk speed test, it delivered a read speed up to 214MB/s and a Write speed up to 186MB/s. 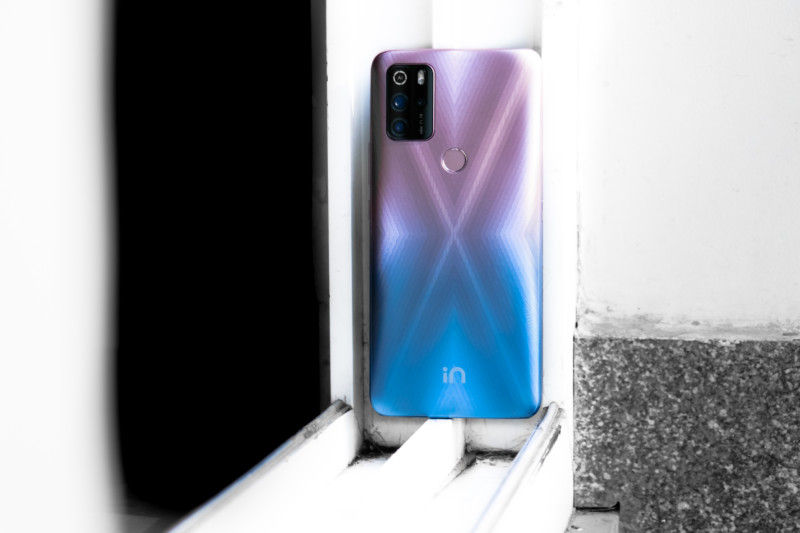 The Micromax In 1 retains the MediaTek Helio G80 SoC and Mali-G52 graphics under the hood which is quite similar to the Qualcomm Snapdragon 662 which lies under its competitors. Even this chipset is capable enough to handle the tasks for day-to-day use with moderate frame drops. It is coupled with 6GB RAM and up to 128GB ROM. However, Realme Narzo 30A is slightly cheaper than the Micromax In 1; powered by MediaTek Helio G85 is a powerful SOC when compared with MediaTek Helio G80. In CPU Throttling Test, The CPU throttled to 90% to its max performance.

Running benchmarks highlighted the capabilities of the Mediatek Helio G80 chipset. It put up a score of 192818 on the Antutu benchmark. While it narrowly beats Poco M3 at 181207, it falls well behind Realme Narzo 30A at 201337. In Geekbench 5, it beats down the Poco M3 and Realme Narzo 30A with ease. 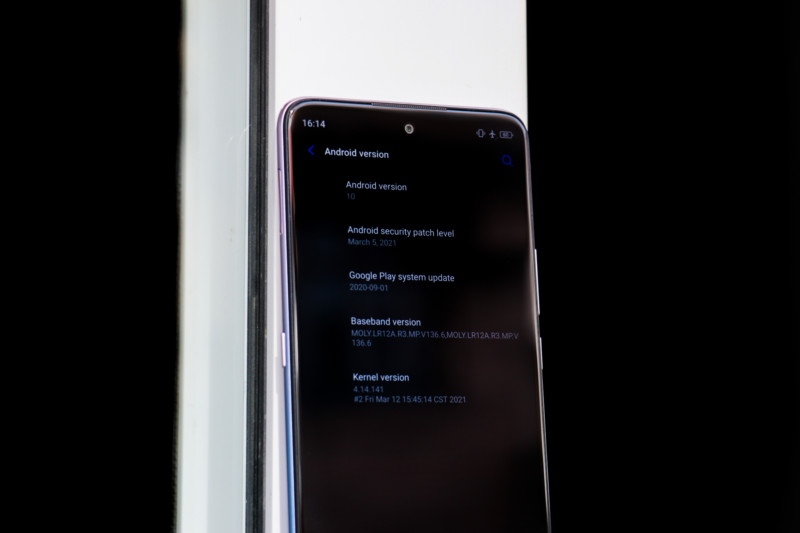 If pure experience is something you’re looking for, The Micromax In 1 may not disappoint you. It offers Stock Android 10 which gives it a major advantage over its competitors with bloated skins. The UI feels snappy and it performs exactly you’d expect with no surprises. It offers a commitment of two years of regular software updates. The software may not look or behave advanced from its competitors, but there’s fun to be found in simplicity. There is zero bloatware that doesn’t choke up the memory. Moreover, the perks of stock android they don’t have unwanted notifications and advertisements. Unless like other smartphone makers who just slaps the notifications spams and bloatware on their devices. It also lacks some of the necessary default apps like Gallery and Music Player, but that can be downloaded in the form of third-party apps from Playstore.

This phone will suffice for moderate gaming, but if you’re looking for a smartphone for gaming there are better alternatives out there. We did play some games on it like Alto Adventure, Asphalt 9, Call of Duty Mobile and Subway Surfers. During our gaming session of COD Mobile on low settings, we managed to play it with stutters and lags. The device gets heated while playing games like Asphalt 9 and COD. To sum it up, it delivers an absolute bloat-free experience with a balanced performance. 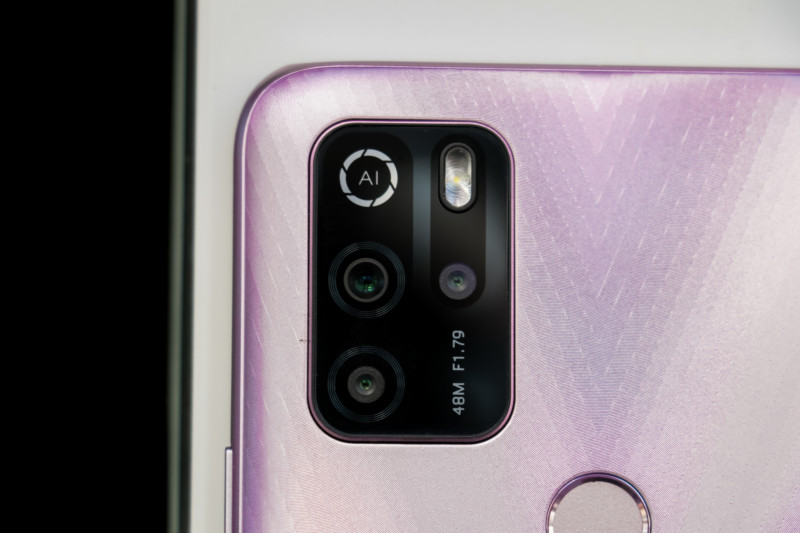 The 48MP primary sensor is the only star that deserves your attention in this array. Images produce richer colours and better contrast in outdoor situations. It does an okay job in retaining the detail and managing the dynamic range. The camera is not consistent when it comes to maintaining exposure and shadows. The close-ups retain a good amount of details and colours. The HDR implementation makes the pictures look slightly better. The Micromax AI mode keeps the colours a little delightful with no oversaturation.

The low light photography results in soft and grainy images. With its built-in Night Mode, it captures more details and less noise in the pictures. There is a focusing issue that persists in this mode which ends up capturing blurry pictures.

Elsewhere, the 2MP depth sensor results in sub-standard edge detection and irreal background bokeh. The 2MP macro sensor helps in capturing close-up shots in good lighting conditions only. The focus usually struggles while locking down on an object which we’ve encountered while reviewing Moto E7 Power.

Over the front, it holds an 8MP selfie camera that captures decent photos in daylight situations and struggles in indoor situations with a lot of digital noise making pictures look soft.

Packing a 5000 mAh Battery, this can survive easily for over a day on heavy usage and can even use it for almost two days on moderate usage. Some smartphones pack a 6000mAh battery but Micromax In 1 still matches them even with lesser battery capacity. The charging is capped at an 18W Fast charger which can juice up the device from 0-100 in 90 to 120 minutes.

In our usage, the screen-time was 8-9 hours which includes Playing games for almost an hour, surfing the internet on Chrome for 7 hours and using social media platforms. If you’re someone who often uses your phone, this can last easily up to 2 days with ease. 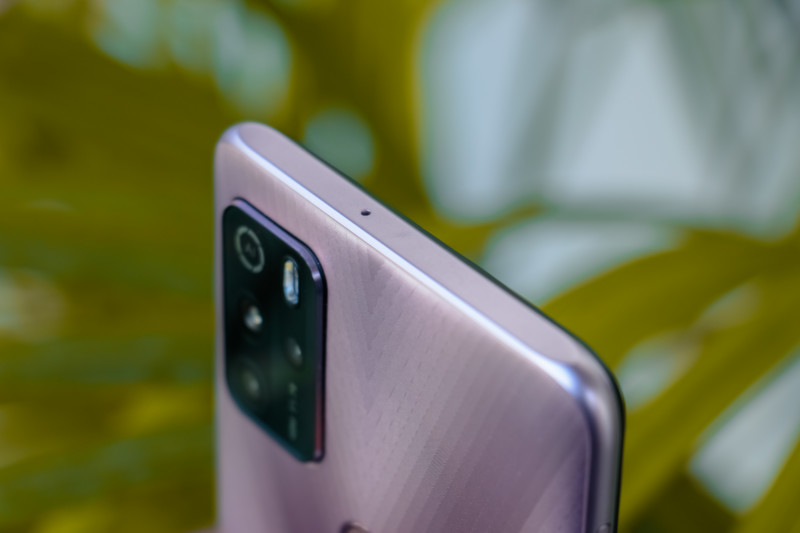 The Micromax In 1 integrates a clean user interface with a subtle performance. The lack of an ultra-wide camera pushes it off from its competitors and isn’t enough to take on the massive strides by Xiaomi and Poco in this price segment. Moreover, besides features, Build quality is a department where other brands excel and Micromax has to work hard. However, the differentiation here is its eye-catching design and clean stock experience without the hassle of bloatware and irritating advertisements

The only major downside is its camera experience and the build quality, but if these points won’t bother you, the Micromax In 1 tick all the boxes for you. If it doesn’t fulfil your needs; You have alternatives like Poco M3, Realme Narzo 30 and a few others with a slightly better camera and build quality.

Disclaimer: We tested the Micromax In 1 smartphone (6GB+128GB) as our primary device on Airtel 4G VoLTE network for a month. All our reviews are unbiased and are published without the brand getting to read them before you guys. We don’t change our reviews on pressure from brands and that’s the reason we are not sent review units from companies like Samsung, OnePlus, and a few more.

Well with that said, do let us know your opinions on this post-Micromax In 1 – The Unbiased Review by dropping a comment down below.