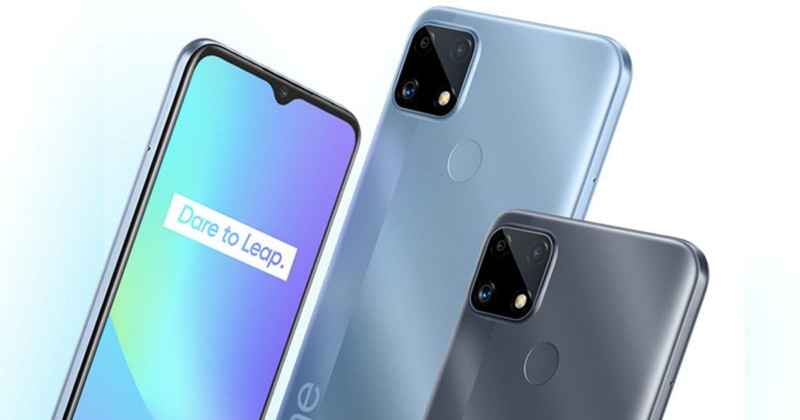 Realme recently added new devices to the Realme C series lineup, including Realme C20, Realme C21 and Realme C25. All of these Smartphones were priced under Rs 10,000 respectively and with some specification changes in each model. Now, Realme will introduce a new device in this series, which will be a small successor to the Realme C25 and will be called the Realme C25s. This phone was recently launched in the Malaysian market and it comes with almost similar specs as the Realme C25 but with a better chipset and different Camera setup.

The Realme C25s has a 6.5″ IPS LCD HD+ display with a maximum brightness of 570 nits and a screen-to-body ratio of 88.7%. It has an 8MP Selfie shooter in the Waterdrop notch display. It is powered by a MediaTek Helio G85 processor and 6000mAh battery with 18Watt fast charging. It boasts a Triple rear camera setup with a 48MP Primary lens, 2MP Macro lens and 2MP B&W lens. A fingerprint sensor is embedded at the back and has face unlock security capabilities. It comes with realme UI 2.0 based on Android 11 out of the box. This device also has all the necessary connectivity features like Dual 4G VoLTE, Wi-Fi, Bluetooth 5.0, 3.5mm audio jack and USB Type-C

The Realme C25s comes in two colour options, Water Blue and Water Grey. This device was launched in Malaysia in a single 4GB RAM and 128GB ROM variant. The price for this phone in Malaysian Market is RM699 (Approx INR 12,262). However, as per the source, this device will come to India in two variants. It will be available in 4+64GB and 4+128GB RAM and ROM options. This device is expected to launch in India in June

Well with that said, do let us know your opinions on this post Realme C25s with MediaTek Helio G85, 6000mAh Battery, 48MP Triple Camera Setup launching in India next month by dropping a comment down below.