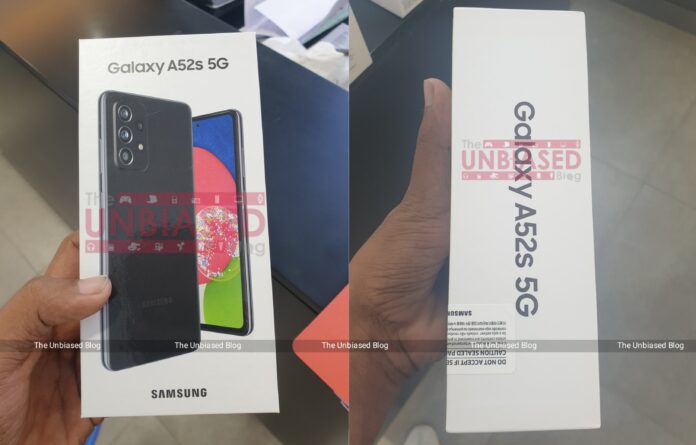 Indian Retail Box of Samsung Galaxy A52s 5G and Galaxy M32 5G leaked on Twitter. The device is said by launching very soon in the Indian market, and as the name suggests, it would be a successor to the very popular Samsung Galaxy A52.

The retail boxes that have been leaked were shared by a Twitter user named Ishaan and the link for the tweets are below. There has also been a listing that has tipped pricing information of the phone ahead of the launch. It is all set to launch in India on September 1. The phone has already been unveiled in the UK earlier this month and it is now set to make its entry into the Indian market. The Samsung Galaxy A52s 5G is powered by the Qualcomm Snapdragon 778G SoC and has a quad rear camera setup with a 64-megapixel main camera.

As for the specifications, the device would feature a 6.5-inch full-HD+ Super AMOLED Infinity-O Display with a 120Hz refresh rate. The phone is powered by an octa-core Qualcomm Snapdragon 778G SoC. Samsung Galaxy A52s 5G comes with 128GB of onboard storage that is expandable via a microSD card.

Well with that said, do let us know your opinions on the upcoming smartphones by Samsung Galaxy A52s 5G and Galaxy M32 5G by dropping a comment down below.